New goals for Posarelli’s last season on the team 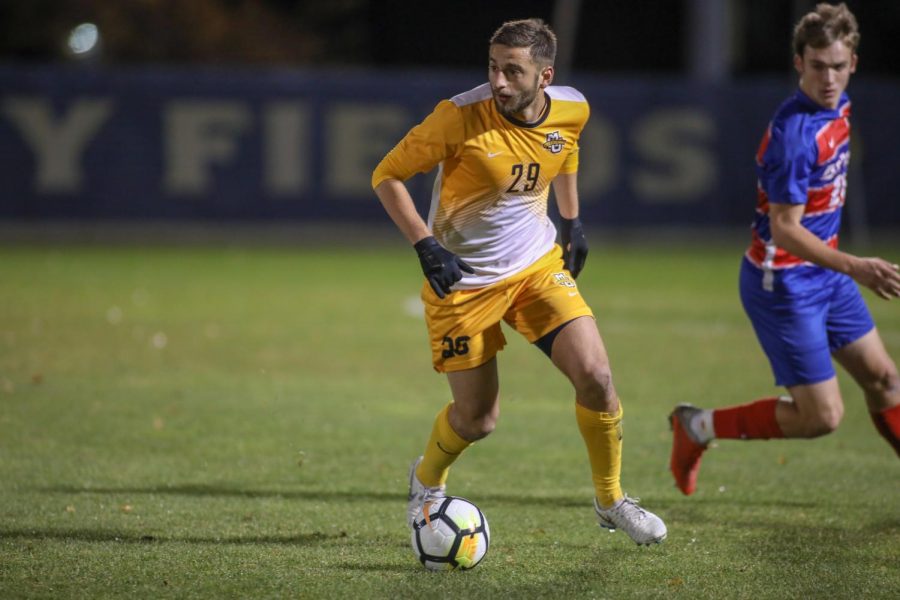 Italy was one of the countries hit hardest by the COVID-19 pandemic in early spring. Italy also happens to be the home of the only senior on the Marquette men’s soccer team for the 2020-21 season, defender Oliver Posarelli.

After redshirting the 2019-20 season and not being able to play due to injury, Posarelli spent the summer in his hometown of Verona where he was unable to leave his house to workout for a majority of the summer.

“I was in the worst place ever,” Posarelli said. “Italy was really struggling, even the public parks were closed down. I was only able to do some little workouts at home but that was about it.”

Now that he is back on campus, he says his approach to the team and to Marquette has been quite different with the new circumstances and COVID-19 protocols.

“Usually in the beginning we try to gather everyone together to create bonds off the field,” Posarelli said. “I have no clue who some of my teammates are other than the name on the screen, and you want to get to know people better to form relationships on the pitch.”

Getting to know people has been more challenging for the team as well, and the men’s team has six new first-years and five new transfer students. However, as the team’s only senior and someone who has experience transferring to Marquette from Montana State, Posarelli’s teammates said that he has been a leading force for their team in this strange season.

“He’s always been that type of person that leads people,” redshirt junior midfielder Zak Wegner said. “We see him treating this year the same way as if it was normal, and it’s very helpful to have someone like him getting everyone on the same page.”

Redshirt sophomore defender Alex Mirsberger also commended Posarelli’s leadership along with his perseverance after returning from an injury a season ago.

“We knew we lost a big part of our team and a big piece of the puzzle,” Mirsberger said. “He did whatever he could on the sidelines and at practice to make us better players, and we’re all excited for him to be back and to be a big part of what we can do on the field this spring.”

Posarelli said that he has tried to schedule Zoom calls without coaches on them in order to be less formal and to get to know his teammates. The team has been able to get to know each other in smaller groups and slowly learning everyone’s interests and their stories that way.

“One of the goals I set this year was to pass down the experience and skills I have on and off the pitch,” Posarelli said. “I want to help the new people adapt to new situations, and I want to set the tone for our team.”

The redshirt senior said that a lot of his veteran teammates have helped him carry the load in terms of leadership. He specifically mentioned his roommate, redshirt junior Manuel Cukaj, as someone he works closely with.

“I rely on him a lot and I always try to have discussions with him about ideas for the team,” Posarelli said. “We try to talk with most of the juniors and guys with more experience here at Marquette to get everybody involved.”

Getting back on the field this year was a goal for Posarelli, and now that it is a possibility this spring. He is setting new goals for his final season at Marquette.

“When we see the opportunity to play, I would really love to see this team be successful,” Posarelli said.

In both his years at Montana State and his three years at Marquette, he has never made the NCAA tournament. This year, Posarelli would like to change that.

“I came to Marquette because I believe the program would give me the opportunity to achieve the goal of getting to the tournament,” he said. “I would like to achieve that goal not only for me, but for my teammates and of course the University, it would be great for everybody.”

This story was written by Matt Yeazel. He can be reached at [email protected] or on Twitter @MJYeazel.