Theis, Martinez reflect on her time at MU filled with ‘humor’ and ‘hard work’ 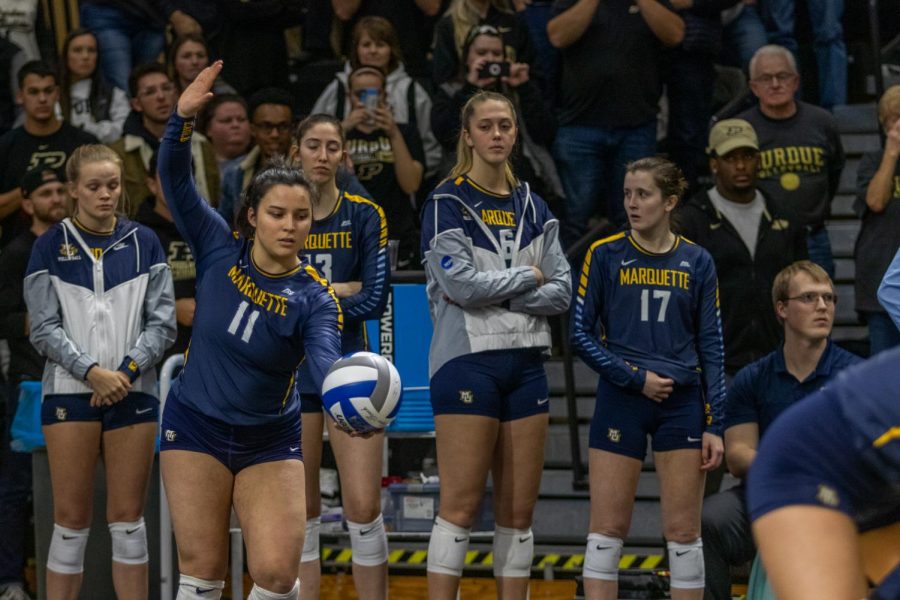 Gabbi Martinez (11) gets ready to serve the ball in a match against Purdue last season.

Senior defensive specialist Gabbi Martinez played basketball and tennis with her two sisters in Austin, Texas, before deciding to focus her time solely on volleyball.

Martinez and her sisters played a variety of sports growing up. Her older sister participated in swimming and her other sister ran on the cross country team.

“I played a bunch of sports when I was younger. I have two older sisters, and we all did, and I was the best at volleyball from the start,” Martinez said. “I stopped playing basketball and the place I played tennis at was kind of far away, and so volleyball is just what I got into and what I was best at from a young age.”

“I went and watched her play at a qualifier in Dallas, Texas. I remember she was in the back corner, it was like court 70, and all the other games I had to watch were on court six, and seven and eight, so I had to walk 60 courts,” Theis said. “I thought she was really driven to be successful. You could just tell she took things seriously, like she wanted to be good.”

While Martinez has not received a lot of playing time over the years, she has had her moments. In one instance, coach Theis recalled Martinez having a 5-0 serve run against University of Central Florida last year at the Redbird Classic, which had the Golden Eagles complete a comeback to win that match in five sets.

However, according to Theis, Martinez has had many contributions off the court as well.

“She’s our (Student-Athlete Advisory Committee) representative, so she deals with a student council of athletes,” Theis said. “I’m a pretty dry and sarcastic person, so she actually beats me to the punchline on some jokes, on some funny, sarcastic comments at times. I just think that’s useful in our gym.”

Outside of volleyball and humor, Martinez has other interests, including being by her dogs, going outdoors and even volunteering in the Milwaukee community.

“I volunteered a lot at Milwaukee Rescue Mission over quarantine and I was with the kids up there in the section of they called Joy House and I got to know them and I just I have still been trying to go like once a week just to hang out with them,” Martinez said. “It’s a nice kind of mental break for me. … Even if I wake up and I’m tired and I’m like I don’t really want to go volunteer right now. Every time I do, I’m like,’ That just made me feel like so much better.'”

Theis said he will miss the sarcasm and humor that Martinez brings to the team along with her personality, independence and professionalism.

“We go 45 minutes, four days a week and every one of those days she said something that made me laugh,” Theis said. “She’s an incredibly hard worker.”

Martinez said although her first year on the team mostly consisted of adapting to college, Marquette is somewhere she’s happy to be. She said her team has become extremely close due to their Sweet 16 run in 2018.

“It’s just been so like so crazy to be on that ride with what the group of girls that we that we have,” Martinez said. “It’s just been really cool to create a home here with people that I have and the staff and like everyone who supports us in like sets up all of the things that we get to do is just so great.”