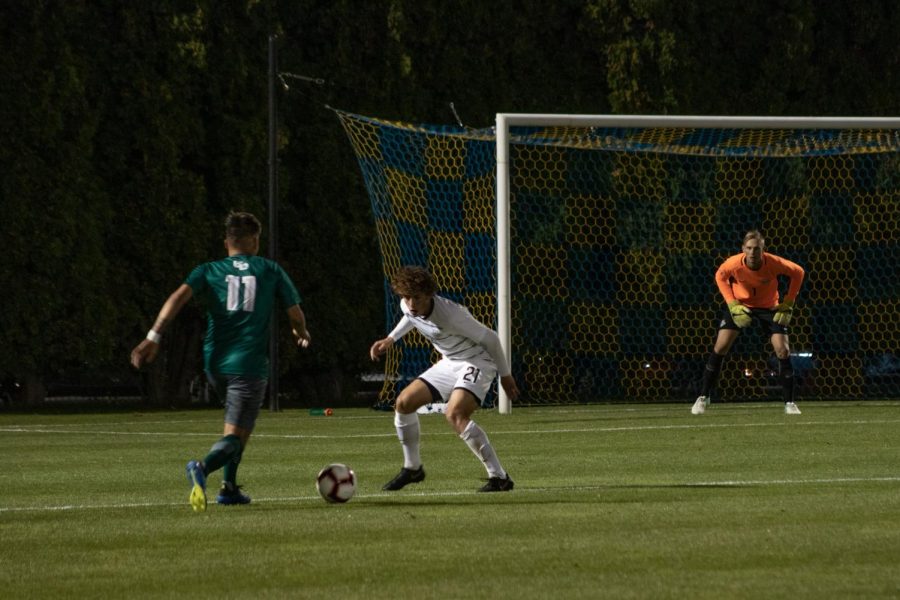 Alex Mirsberger (21) sets up defensively during a match last season against Green Bay.

The Marquette men’s soccer team features players from all over the country, and from all over the world. While some have traveled thousands of miles to continue their collegiate careers for the Golden Eagles, others drove no more than 30 minutes east to make Milwaukee home.

Redshirt sophomore defenseman Alex Mirsberger and redshirt junior midfielder Zak Wegner are both Wisconsin natives. Mirsberger is from Brookfield, a city about 15 minutes west of campus, while Wegner is from Hartland, a town that is also west of campus, and was born in Milwaukee.

“The coaches knew of me and I knew of them as well, so it was always in the back of my mind,” Wegner said. “Eventually it played out to be the place where I really wanted to be, so it ended up pretty well.”

In addition to being accustomed to the sports culture that Marquette had to offer, Mirsberger was also drawn to the university through family ties.

“Obviously I grew up watching Marquette soccer and watching Marquette basketball. My dad went to grad school here, so I just kind of knew it. I knew the university well,” Mirsberger said. “Just knowing them and wanting to be part of it was definitely a reason why I wanted to come.”

While the majority of the men’s soccer team come from out of state, staying in Wisconsin to play collegiately comes with its perks, especially after a successful high school career.

“Being one of the top high school players in the state and then staying in your state playing college, your name’s definitely out there. People know who you are, which is pretty cool,” Mirsberger said. “If people were to come to the games and be like, ‘Oh, he’s from Wisconsin,’ that’s just another factor that I think is pretty cool, and something that I kinda pride myself in for sure.”

Both players had success in high school, putting them on the Marquette coaching staff’s radar. Wegner was a two-time All-State honoree, as well as the 2016 Classic Eight Conference Player of the Year, setting a single-season school record with 32 assists and 32 goals scored. Mirsberger was a First Team All-Conference selection as a junior and senior, and also won a state title with Elm Grove Soccer Club in 2017.

The success has carried over to college. Mirsberger tallied one goal and two assists in 16 games last season, 15 of which were starts. Wegner has played in 35 games over the past two seasons, notching 2,459 minutes of play. He also played in every match of the 2018 season, starting in every game except one.

Staying in-state can also make the transition from high school to college easier both on and off the field. Mirsberger said he feels like a “host” for the players that come from out-of-state since there are different playing styles in Europe, the United States, and even in Wisconsin compared to other states. He also said the coaching staff has done a great job of recognizing all styles of play on the team, such as playing out of the back and keeping possession of the ball.

“(Being from Wisconsin) made (the transition) a little bit easier,” Wegner said. “Going from high school to college, obviously that’s a big jump in the level, but from being around here I knew other players who were on Marquette before me … So I was used to some players that were already on the team. So knowing that and knowing the coaches ahead of time, I think really helped the transition.”

Wegner said he initially thought that he would want to be far away from his family, but seeing his parents and grandparents come to his games so often has meant a lot to him in his college career. He said that it is nice to have family close while being in a familiar area.

For both players, it is clear that there is no place like home. After being immersed in Wisconsin’s culture for his entire life, there was only one way that Mirsberger could describe America’s Dairyland.

“Wow, the state of Wisconsin? I would say the most dedicated fan base in the United States of America,” Mirsberger said. “For sure … the competitiveness is definitely there.”