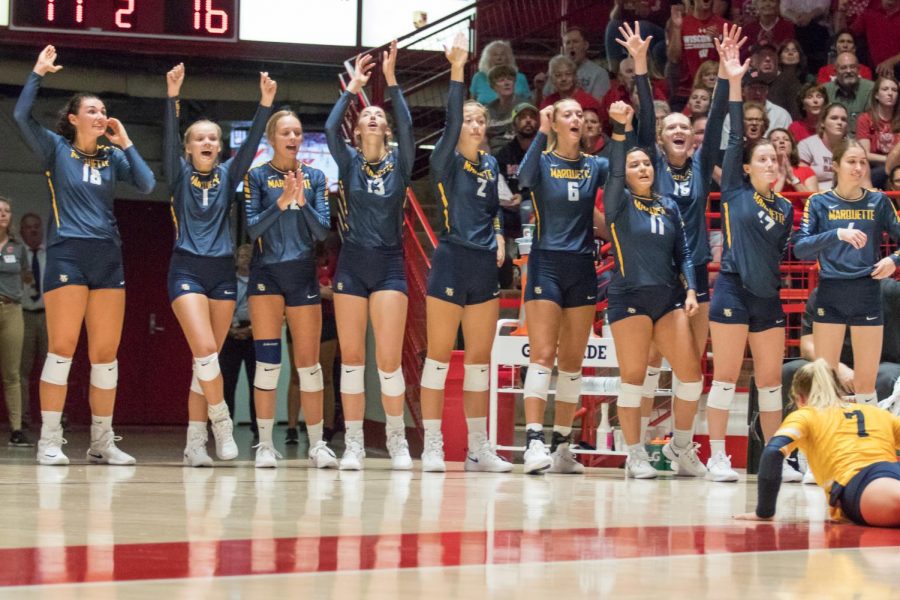 The Marquette volleyball team celebrates during a game Sept. 5, 2019 at Wisconsin.

The NCAA announced Sept. 16  that the Division I Council will be approving proposals that move the fall conference seasons to spring 2021.

For Marquette Athletics this will have an impact on men’s soccer, women’s soccer, volleyball, and cross country.

The volleyball squad will be able to have a regular season from Jan. 22 to April 3 with a 48-team championship tournament scheduled for April 23 to 25.

The cross country regular season will be from Jan. 30 to March 5, but there is some concern from head coach Sean Birren and his runners about cross country, indoor track and field and outdoor track and field all taking place in the spring. The Division I Competition Oversight Committee will continue to look for solutions, but the men’s and women’s championships are currently scheduled for March 15.

The Council has also made a variety of adjustments for the proposed spring season.

Practices will be prohibited during finals and the week prior at the end of the fall semester if a team is “in-season” but not competing. Schools will be able to extend their seasons past the NCAA championship date, but must end prior to the conclusion of the academic year. There must also be a break before the beginning of the championship portion of team schedules.

The goal is to have teams meet a specified minimum number of required games for the season, but the oversight committee has already suggested reducing the amount of contests by 50%.

Championships will be played at predetermined locations that will be announced at a later date. The NCAA also announced that there will be less locations used to preliminary rounds in order to maintain health and safety for athletes and personnel.