Building a University: A timeline of Marquette’s development into today’s campus 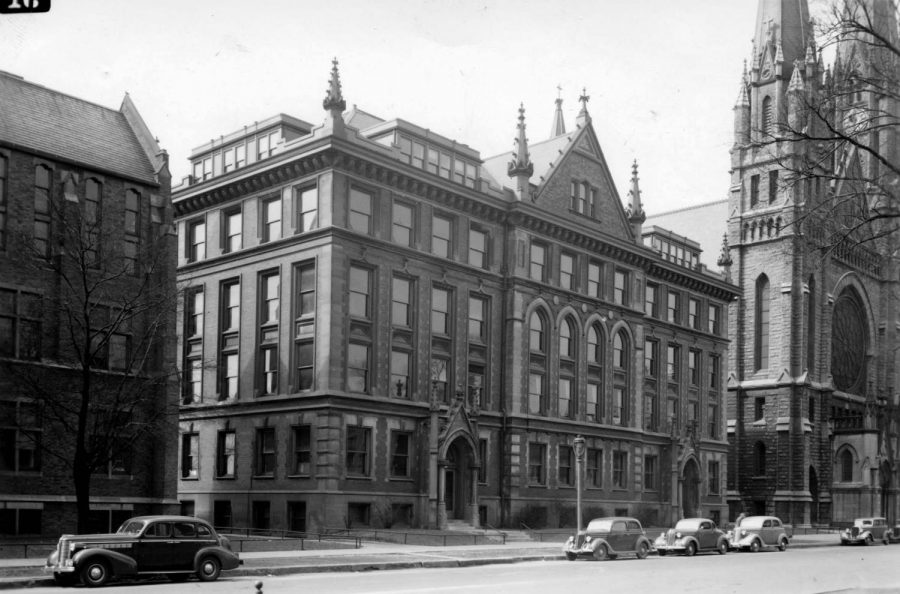 Johnston Hall was built in 1907 as one of Marquette's first university buildings.

Marquette University starts as a Liberal Arts College for men by Rev. John Martin Henni with the investment help of Belgian businessman Guillaume Joseph Deboy. The university starts in honor of the rich culture that is The Society of Jesus.

The gothic-style Church of the Gesu is one of the oldest standing buildings on Marquette’s campus today. The church is named after Chiesa del Gesù in Italy. The first cornerstone can still be found today with the inscription of the year ground was broken, 1893.

Johnston Hall is built right next to the Church of the Gesu and is one of the first buildings erected exclusively for Marquette’s campus. The building is named after Robert A. Johnston, who is president of Johnston Baking company. Johnston donates essential funds toward the erection of the building, according to the Marquette University Archives.

Sensenbrenner is known as the original law school. It is originally built as an academic building to support the growing law school night program at Marquette. It is renamed in 1955 to Sensenbrenner Hall to honor Frank J. Sensenbrenner.

Alongside Sensenbrenner, Marquette Hall is originally erected as the university’s science building. The current building brandishes a set of 48 carillion bells. which play music that can be heard throughout campus.

The original Memorial Library was originally built in the shape of a cross but after certain remodeling projects in the 70s, the cross-like features are no longer recognizable.

1952, O’Donnell Hall is built as a residence hall for women.

The O’Donnell Hall project is an initiative set up by the Association of Marquette University Women in response to the lack of housing on campus for women. The “H” shaped hall was then later converted to an all-male dorm for incoming first-years.

Originally in place near where Raynor Library sits today, Brooks Memorial Union was once used for taekwando and dance lessons and housed the Air Force ROTC. The Union was destroyed in 2001 to make a place for the new library.

1956, Carpenter Tower starts leasing out as an all-female residence hall.

The tower on the east side of campus opens in 1922 as the Catholic Knights Tower. The university begins leasing it out as a female residence hall, and then fully buys it in 1960. In 1972, the tower became the university’s first co-ed dorm.

Walter Schroeder serves as a successful hotel chain owner and philanthropist. The now-current sophomore dorm is named after the philanthropist who benefited the university after his time on the Board of Governors.

1964, Another Hotel is bought and turned into Cobeen Hall.

The LaSalle Hotel is renovated and reopened in 1964 as an all-female residence hall across the street from Carpenter Tower. At the time, Cobeen was known as the “Beanery” and was recently turned into a co-ed dorm this year.

1966, a cylindrical shaped residence hall makes its debut at Marquette.

McCormick Hall is built as an all-male residence hall that housed up to 735 total residents. The odd shape was because of an apartment complex that was there at the time of construction.  The dorm also features two dining rooms and even a sauna.

1966, the oldest building in Milwaukee is reconstructed on Marquette’s campus.

St. Joan of Arc Chapel has its history dating back to 15th century France. It is brought over from its European home to the United States in the 1920s by Gertrude Hill Gavin, but it isn’t given to Marquette as a gift until the 1960s. The chapel also includes a stone that St. Joan of Arc had been rumored to pray over before battle.

Originally built in 1939 to providing housing for Milwaukee residence, Abbotsford Hall is originally built as housing for graduate students when it was purchased by Marquette in the 70s. Work was done on the hall from 2005-06 to make room for incoming students.

1971, Lalumiere Hall dedicates in name of a founding father of Marquette

The uniquely honeycomb-shaped language hall that was built in 1969 was named after Rev. Stanislaus P. Lalumiere.  Lalumiere had served as the university’s President in 1881 for one year until he stepped down due to health concerns.

1978, Olin Engineering Hall faces difficulties but fits in between buildings.

Before its finish, Olin Engineering Hall faced many hardships, like trying to fit itself between Haggerty Hall and Memorial and the underground utility wires as well. Eventually, construction on the hall was able to be completed.

Half of the Alumni Memorial Union’s funds come through an anonymous donor. It contained twice the space of it’s predecessor, the Brooks Memorial Union. 1993, David A. Straz Jr. Hall is purchased by the University.

Originally the central branch for the YMCA of Milwaukee, Straz Tower originally rented out rooms to students in the 70s before finally being purchased in 1993.

2003, a new addition to Memorial Library.

Raynor Library was the 24/7 addition to Memorial Library and one of the first projects for Marquette in the 21st century.

The Commons Residence Hall is Marquette’s newest residence hall that features two separate buildings: Wells Hall and Eckstein Hall. The new dorm has its own dining hall and is one of the dorms on campus that is co-ed by the door.

Marquette’s latest plans include a 70 million dollar business school to replace the green space where McCormick once stood and a Black Excellence Center. The new space of the business building leaves many to wonder what could possibly be next for Marquette’s future.