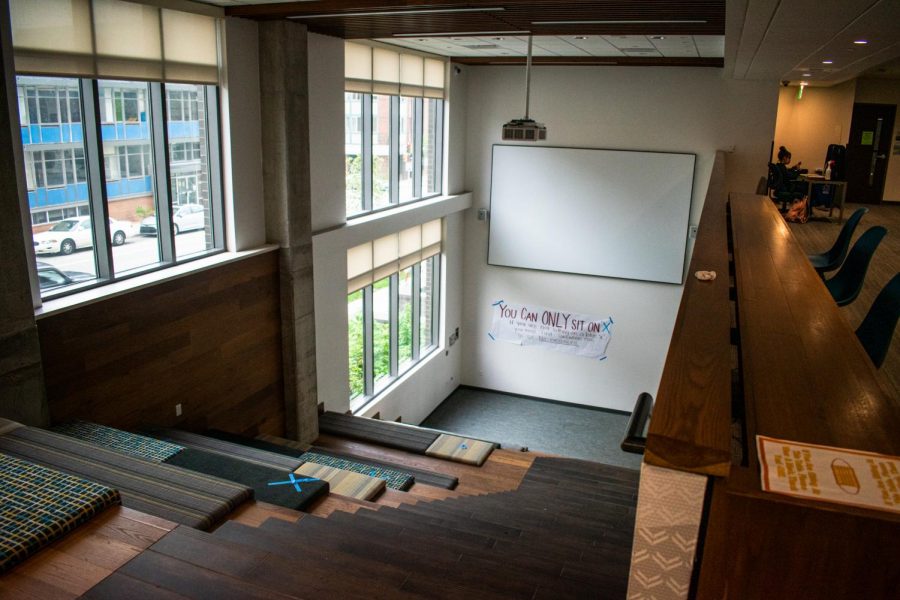 The Commons’ theater space has been shut down for public use after students using the space were recently in “severe violation” of the university’s guidelines.

The decision came after numerous social media posts documented students in the space not wearing masks or social distancing, according to an email sent to residents of Eckstein and Wells halls by Eckstein Residence Hall director Grace Konyar.

The general guidelines in The Commons theater require everyone inside to wear masks and remain socially distant from each other with a limited capacity. Spots are on the chairs of the theater in order to ensure social distancing.

“I went there a few times and watched some basketball games and never felt unsafe,” Jack Moyer, a first-year in the College of Engineering, said. “I don’t think it’s really necessary to shut it down”

Moyer, who is a resident of Eckstein Tower, received an email from Konyar Sept. 9 that said that behaviors posted on social media were “unacceptable and posed a serious health and safety risk to the Commons community.”

He was initially disappointed by the recent decision, but said he understands Marquette’s reasoning.

“I understand that Marquette has policies in place and if or when people break them they are going to have to do something,” Moyer said.

The theater will still be open for students to use, but all requests must now be made through a residence assistant, Konyar’s email said.

She said in her email that she intends for everyone to maintain a safe and healthy lifestyle on campus that starts with accountability for each other.

“I feel like shutting it down was an impulsive decision they didn’t put much thought into,” Kyle Larsen, a sophomore in the College of Business Administration and resident of Eckstein Tower, said. “They have nobody watching over the area so naturally students are going to see it as an area to mingle without backlash.”

Larsen said he feels like the theater should remain open but instead have people “watch over it occasionally” in order to fully enforce social distancing within the theater.

“It saddens me to have to close off an area where students could gather safely but after reports from parents, other students and videos via social media sent to upper University administrators we were left with no other options,” Mary Janz, Executive Director of housing and residence life, said in an email.

Janz said she understands the frustrations surrounding students who have used the space and obeyed the guidelines outlined in the pledge toward community standards.  On the document in bold letters, students pledged to wear their masks and keep physical distance.

“My hope is that students help us mitigate the risk of COVID-19 and begin to understand the risks inherent in gathering in groups without face coverings and social distancing,” she said in an email. “We often say ‘We are Marquette’ and ‘Be the Difference.’  My hope is that we all rise to the challenge before us.”

Janz said she had yet to receive any complaints from students directly, but she has hope for the future.

“I am hopeful that we will be able to open up the theater for gatherings other than those planned by staff as the semester continues on,” Janz said in an email. “We will track cases and quarantines in the two residence halls and monitor students’ attention to the policies.”