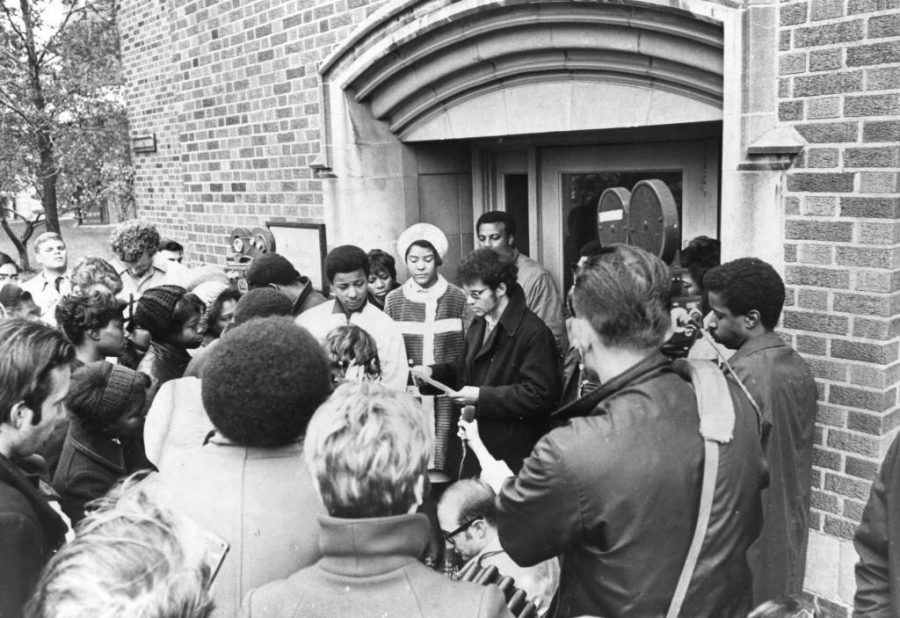 On a frigid December evening in 1966, a group of Marquette students picketed in front of the Eagles Club, protesting its “whites-only” membership policy and the university’s decision to host its annual Tip-Off dance in one of its ballrooms. Demonstrators huddled close together to fend off the cold, tugging their hats over their ears and curling their fingers into the palms of their mittens. They spoke of their disheartenment at the “neutral position” of the administration towards holding the event at the club, according to the Milwaukee Journal Sentinel’s coverage at the time.

It was not the final time students urged the university to account for its relationship with the broader Milwaukee community.

Since the mid-1960s, civil rights activists throughout the city have been fighting for an end to racial discrimination in academic institutions. Concurrently, undergraduate students at Marquette took up the fight for decisive integration on their own campus.

“They have shown, with a full voice, the effectiveness of student protest,” Sergio González, assistant professor of history at Marquette, says.

As an educator of urban history, González ordinarily finds students wonder-stricken by tales of young activists.

When they see images of the past, inquisitive students probe further: “Why would someone get involved in these protests?”

The question is fair, he responds.

“It could be that they saw the work of racial justice and economic justice as intimately tied to who they were as individuals living within Milwaukee,” González says. “Perhaps they took a course on campus where a conversation came up.”

Or it could just be that students, who saw examples of activism in the news media every day, simply could not disassociate themselves from the reality of racism.

“The open housing marches lasted for a year,” González says. Eventually, people have to ask themselves, ‘Which side am I on?’”

It was college students who championed the change necessary for school desegregation, Robert Smith, director of the Center for Urban Research, Teaching and Outreach (CURTO), says.

“The opinion in [Brown v. Board of Education] is really the outcome of what was two decades of legal activism at colleges and universities,” Smith says.

In a broad sense, protests are simply ways in which individuals of a community can have their voices heard — especially groups who feel as though the traditional avenues of power within a democratic society have not been effective in enacting meaningful change. Protest is a multifaceted and powerful modality, and may assume the form of a sit-in, picket line, die-in — where participants simulate death to assert a political message — or public fasting, Smith says.

In 1967, Marquette student activists continued their involvement in local politics. Holding signs that read, “Happiness is a color blind judge,” and “Judge Seraphim, we demand justice for all,” members of Students United for Racial Equality (SURE) gathered at the student union to picket a talk given by Milwaukee County Judge Christ T. Seraphim. Seraphim had derided prominent civil rights activist Father James Groppi and boasted of a membership to the Eagles Club, the haven of segregation for discriminatory socialites. Because Seraphim had revealed latent impartiality, he was unfit for legal office, protestors contested.

Later that semester, demonstrations pointedly intensified. SURE held “a weekend of Christian Activism,” which included activities such as a 24-hour vigil at the home of Seraphim, an action the judge was far from pleased about. This time, members of Marquette’s Young Democrats club led the charge.

“I’m not going to comment on these kids,” Seraphim commented to the Sentinel. “I don’t know who they are or what they want.”

“It helps us understand how we got to where we are now,” Blank says. “It provides context so we understand that people — whether they be students, staff, faculty or administrators — and the university as a whole don’t make decisions in a vacuum.”

For months, SURE urged then-university president Fr. Raynor to publicly address Milwaukee’s open housing crisis, as well as other social issues. On Nov. 23, 1968, Gregory Stanford, SURE General Coordinator, sent Fr. Raynor a letter reiterating his desire to see the institution take an unequivocal stand against racism.

“The tone of the letter he sent in reply was, ‘We’re doing very well now and everyone knows it.’ What Marquette is doing now is just the basis,” Arthur Heitzer, project coordinator of SURE, said at the time. “What we’re looking for is evidence of his realization that much more is needed.”

In 2020, current University President Michael Lovell published a letter addressing prejudice and police brutality in the nation. In it, he asked the campus community to “pray for an end to racism.”

Marquette students in the sixties assumed an intersectional approach to solidarity; many involved in open housing marches would also participate in anti-war demonstrations. This approach is tactically useful; protests are most effective when they build broad coalitions of people, González argues.

“There are these interlaced examples of protests happening on campus,” González says. “Students at Marquette, at least those who became interested in protesting and joining as allies in solidarity with the open housing marches, understood that their protests also included standing against U.S. intervention abroad in Vietnam at the time.”

On college campuses, González says, the fundamental question on civil disobedience becomes: Who is the audience protesters are trying to reach? Student protesters may try to address the faculty, who they may feel do not accurately represent their voices in the classroom. Students may also turn attention to the Board of Trustees, as financial decisions are often made out of public sight. In 1968, however, students sharpened their focus on the administration. Marquette does not exist in isolation, but rather is an integral presence in Milwaukee, they insisted.

“Students were pushing the university to be held accountable to the city,” González says. “Marquette has always prided itself, at least publicly, as being an urban institution that is intimately connected to the community in which it lives. But the reality is, of course, that more often than not the university has failed historically to meet those obligations.”

Following the assassination of Reverend Martin Luther King Jr., members of SURE organized a sit-in on campus. Subsequent marches and sit-ins took place, but what was to come would shake Marquette to its institutional core.

“Really, the turning point was when Black students who were on the basketball team decided they wanted to take part,” Donte McFadden, senior associate director of undergraduate research and high-impact practices in the Educational Opportunity Program, says.

Raynor convened a committee in the wake of the protest, and after an extended period of negotiations, created scholarships for Black students and multicultural course offerings. The protest at Marquette concluded with the return of 17 of the 20 Black students who withdrew from the university, provided they were allowed to take final exams and that no university sanction would be taken against them.

In September of 2020, the Marquette men’s basketball team led a mile-long march to fight continued injustice.

“Just like we’ve seen in recent weeks, the university has tried to create resources to increase the amount of Black students at Marquette,” McFadden says.

Following a demonstration led by Black students in late August of 2020, the university announced it would add 40, full-year, full-tuition scholarships for graduating Milwaukee high school seniors. The university also committed to a diversified Counseling Center, as well as adding Core Curriculum courses related to racial justice.

More important than merely drawing students to campus is retaining and graduating those students, McFadden says.

Founded in 1969 by Arnold Mitchem, Marquette’s EOP was the first organization in the country to assist underrepresented and first-generation students in their transition to college. The federal Department of Education, which funds the program, identifies underrepresented communities as African American, Latinx, Native American and Pacific Islander, McFadden explains. The rhythm of change at the university, however, has at times achieved an internal homeostasis.

Administrators asked themselves that question every day since the turbulent protests of the 1960s, and it remains a question administrators are ask themselves today as Black students advocate for changes on campus, González says.

“Why has the university not made those kinds of big bounds and jumps forward that the students in the sixties were calling for?” González asks. “That’s a larger systemic issue. We can ask that same question about the housing industry, about many different industries in the city that students and protests were trying to fundamentally change. But we have to be very honest about it: Marquette is very pitifully behind in reaching out to students of color and representing the Milwaukee community in which it lives.”

“We need to disavow the notion that progress is inevitable, or slow-marching on its own. Progress is something that results from human action and engagement,” González says. “It is important for us to acknowledge that many structures that are in place in 2020 that people feel keep them in marginalized positions are the same structural issues that existed in 1968.”