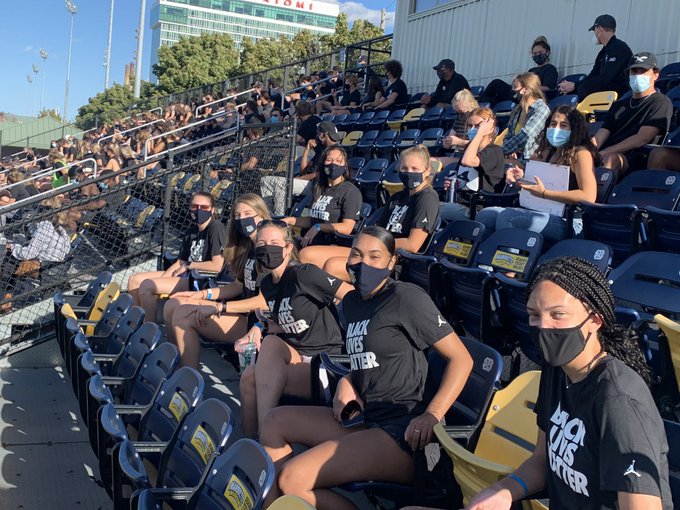 Breyan Ashley (second from right) poses with the volleyball team at Valley Fields after the athlete march Sept. 4. (Photo courtesy of Marquette Athletics.)

In sports, many athletes want to compete at the highest level possible. That could mean playing professionally, playing the highest level of a recreational league, or even changing schools to face a higher level of competition. That’s exactly what junior transfer Breyan Ashley did. She came to Marquette from St. Mary’s College of California.

“It was nothing against my old school. It’s just I felt like I needed change,” Ashley said.

Ashley said the transfer process was not easy, as she had to follow the COVID-19 protocols while considering Marquette.

“Not being able to visit, I didn’t know anything about Milwaukee before I came here, so it was definitely watching a lot of YouTube videos of what the city of Milwaukee is like,” Ashley said.

However, after watching recap videos of Marquette volleyball, Ashley knew Marquette was the place for her.

“Where I come from, I just thought that it would be the right fit for me,” Ashley said. “The coaches and the players made me feel wanted and needed at the program well before I even committed.”

Head coach Ryan Theis said he saw a great fit due to her technique and skillset and her off-court presence.

“She’s nice and upbeat,” Theis said. “We did a team talent show in the summer and she sang a solo and we were blown away as a team because she actually had talent, for the rest of us we cannot sing, very few of our players can dance. … To have the guts to do that to a team you’ve never met in person, I really like that.”

Ashley said she has felt a part of the group despite not seeing many of her teammates in person.

“Going from California to Wisconsin during the pandemic is not necessarily ideal, but I made the decision because I knew that building those relationships were extremely important,” Ashley said. “But the team has been very understanding an even still with all of the protocols we have to go through, they’ve been very welcoming.”

Ashley said she feels she’s taken volleyball for granted recently but now with the fall season being canceled. She has higher expectations for herself in a possible spring season.

“My biggest personal goal would probably be to leave it on the floor and constantly be grateful that I’m able to do this,” Ashley said. “And I would never take it for granted ever again cause boy, do I miss it.”