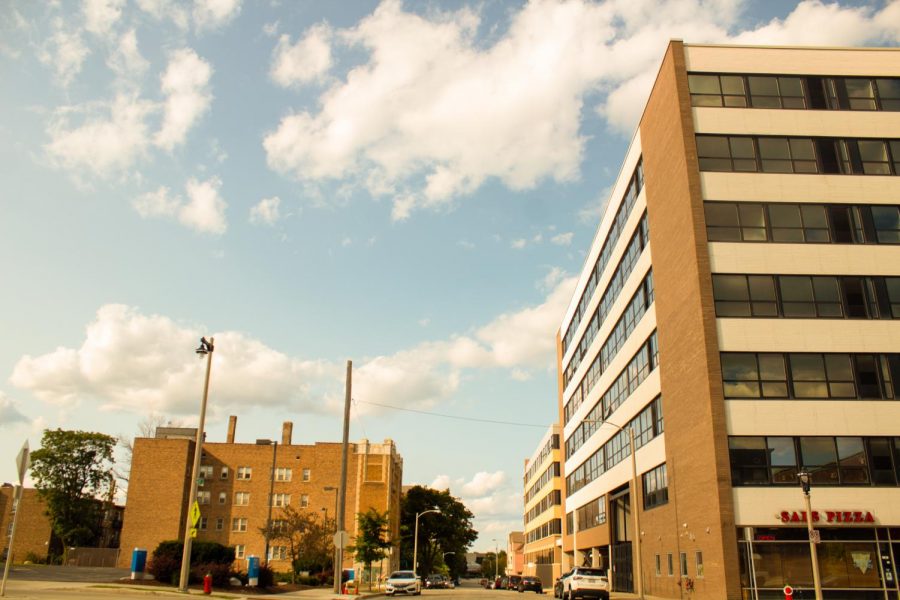 The "Marquette Bubble" is a term often used to describe the sense of community on campus in stark separation from students' comfort in Milwaukee's surrounding neighborhoods.

Down Wisconsin Avenue or Wells Street, along sidewalks, between buildings and green spaces, Marquette students walk paths through campus so familiar they could likely do it with their eyes closed.

Marquette’s name can be seen all throughout these paths, on buildings, on the flower bed in front of Raynor Memorial Library, or even on a shirt of a friendly face who walks by. This sense of familiarity and school pride is in large part what makes the Marquette community feel like home.

But beyond Marquette’s campus, students are often warned against going further west than 20th or 21st streets and taught to be wary if walking farther north than State Street. Stereotypes and a history of racial divides can keep student’s engagement with Milwaukee artificial. Student’s interactions may be limited to such activities as frequenting Bradford Beach during the few weeks of warm weather, or finding themselves in an Uber on the way to bars on a Friday night.

This deep sense of community within Marquette and sense of separation from the larger Milwaukee community is what is often referred to as the “Marquette Bubble.” It is not a concept, says Ed de St. Aubin, associate professor of psychology at Marquette, that is not new to campus.

With 21 years at Marquette, de St. Aubin has gotten to know the Marquette Bubble and its impact on the community.

“When I came in ’99, that bubble was pretty thick,” de St. Aubin says. “It was, you know, made of plexiglass. I mean you really couldn’t escape it.”

The bubble is caused, in many ways, from false perceptions about Milwaukee, de St. Aubin says. He’s heard the warnings about the surrounding neighborhoods. Fears over violence or discomfort concerning the homeless population, however, often comes down to false perceptions fueled by stereotyping. The reality isn’t as bad as the image created, he says.

This can be contributed to a history of segregation and racial divides.

“Milwaukee is a city that is still racked with racist practices,” de St. Aubin says.

Milwaukee consistently ranks as one of the most segregated cities in the United States and  has been named one of the worst places to live as a Black person in the United States. Milwaukee has a complex civil rights history with such racial justice actions as the fair housing marches in the late 1960s, then the Sherman Park riots in 2016 and today’s Black Lives Matter protests.

“Milwaukee’s not a typical city,” de St. Aubin says. “Unfortunately, there’s just a lot of barriers to true diverse collaboration because of its history. Because of the real connection between ethnicity, for instance, and socioeconomic status in our city.”

This misperception is not one-sided, admits de St. Aubin. Just as Marquette has a certain image of surrounding neighborhoods, those same neighborhoods have images of Marquette students as white, rich and entitled, he says. This creates a rift as some Milwaukee residents feel that students can never understand their lives.

Beyond student and community attitudes, the Marquette Bubble is in part a product of the development of Marquette itself. Marquette’s campus expanded in the 1960s as part of larger Milwaukee urban renewal plans. Under the 1949 Federal Housing Act, Marquette’s campus came to occupy the space between Wells and Clybourn Streets, and between 11th and 16th Street. As part of the urban renewal plans, the 1949 Federal Housing Act aimed to bring development to the city. The development that resulted from this act caused fragmentation and displacement of Black, Latino and Native American populations in Milwaukee.

De St. Aubin says breaking through this bubble is important for students, explaining that understanding the community enriches the lives of students as well as the city.

De St. Aubin helps students engage with the greater Milwaukee community through some of the courses he teaches. Off-campus trips to the Milwaukee LGBT Community Center and drag shows were staples of the queer self course he taught Fall 2017-2019. Field trips and internship programs, he says, are great opportunities for students to get to know Milwaukee.

But the Marquette Bubble is not all bad. The bubble gives a sense of security in the transition into adulthood, says Erin Hoekstra, assistant professor of Social and Cultural Sciences. Students are constantly surrounded by people with similar demographics, making it easy to find people to be friends with or perhaps date, she says.

“College can offer you the best parts of adulthood without the worst parts of it,” Hoekstra says. College as an in-between stage from childhood to adulthood, offers freedom without full adult responsibility.

The bubble is, in a way, just a part of college. At any school, college is a time where students are often surrounded by those who are similar to them and interactions are largely limited to those within close proximity. This coupled with the intentional cultivation of the Marquette experience naturally results in a bubble, Hoekstra says.

De St. Aubin also points to student bonding as a source of the bubble. He says Marquette works hard to give the collegiate feel to the student experience. He adds that while events like movies at Varsity Theatre create a feeling of community, they also make it easy to never leave campus.

“It’s kind of a positive, but it has an unintended consequence,” he says.

A strong sense of community is not negative in itself, says Hoekstra, but never engaging with the greater community is. Because many students study, work, eat and live on campus, the ability to remain on campus can make disengagement easy.

Through internship and service programs, Hoekstra says, getting involved in the Milwaukee community doesn’t have to be a challenge.

Kim Jensen-Bohat, director of the Service Learning Program and Marquette class of ’98 for undergraduate studies and ’05 for graduate school, echoes Hoekstra’s sentiment, saying that every college has a bubble. College is a time to focus on self-growth, and with busy schedules, students don’t always have time to engage with surrounding communities, she says.

But at Marquette, Jensen-Bohat says, it’s hard not to get engaged because of the number of programs dedicated to engagement.

The Service Learning Program works with courses across disciplines to partner students with Milwaukee-based organizations in their field of study. Jensen-Bohat notes the complicated nature of service work that can make it problematic. In the 1990s and even into the early 2000s, she says, service was more of a charity mindset, serving in an altruistic manner.

“I think that students have become a little more critical and push on those structural social justice issues that we want them to push on,” Jensen-Bohat says.

Students are encouraged to think critically about their service work, as well as what it means to engage with the Milwaukee community, says Jensen-Bohat. Service learning presents students with an opportunity to connect with the community and wrestle with the concept of diversity.

Getting involved in the larger Milwaukee community doesn’t have to be through Marquette programs, says Jensen-Bohat. It can instead look like attending the Milwaukee Film Festival, Fondy Food Market or diversifying your news feed.

“I think that in general we don’t challenge ourselves to cross-cultural experiences and we kind of stick to what we know, what’s familiar,” says Jensen-Bohat. “It takes a little risk to put yourself out there.”

Though the bubble may be getting thinner as de St. Aubin feels, Jensen-Bohat is hurt that conversation about the Marquette Bubble is still going on.

“I think we need to just start challenging that whole concept of the bubble,” she says. “We make the bubble. Nobody else makes it.”