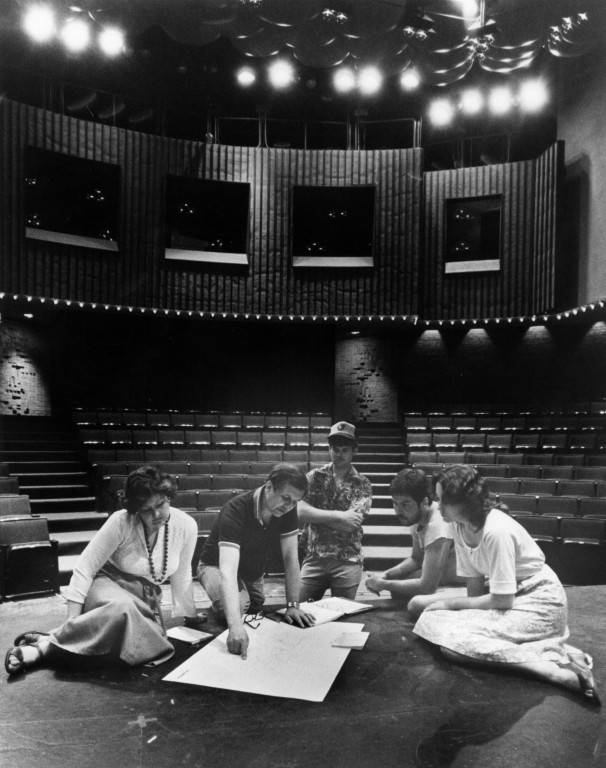 Stephen Hudson-Mairet, department chair of digital media and performing arts at Marquette, has been working in the university’s theater department since the fall of 2000. Over the past two decades, Hudson-Mairet has watched the department evolve and grow.

Generations of theater students have started off their acting careers under the spotlight in various classrooms on Marquette’s campus and have taken their experiences to even bigger, brighter stages all over the world.

When he first arrived, the department chair was Phyllis Ravel, and Hudson-Mairet says she ran a really amazing theater program, which is part of the reason he chose to come to Marquette.

“There was a lot of students involved in the program and the level of work was really high,” Hudson-Mairet says. “The energy, the quality, the excellence of the program was all high.”

He says there are a lot more students double majoring compared to 21 years ago. The theater department is a slightly smaller program than it used to be, but still very active, and they made some changes to recruiting a few years ago, including the added requirement for all students to audition to get into the program.

“I think right now, the body of students that we have across the board is really strong,” Hudson-Mairet says. “It used to be that we had a large program and there were a core group of people who were very active. But everybody in the program right now would be a strong student in many programs.”

However, the theater department’s history runs much farther back than just 21 years ago. After the establishment of Marquette College in 1881, performing arts were largely supported by student clubs. According to Marquette University’s archives, early theater and drama groups included the Harleguins, established in 1920; the University Theatre Club, established in 1923; and the Shakespeare Club, also established in 1923. These three groups fell under the Department of Speech and the Department of Dramatic Art. In 1926, both departments merged to create the School of Speech, which included the theater arts major.

The University Theatre Club and Shakespeare Club combined in 1925 to create The Marquette University Players. The group’s first theater, located in the attic of Johnston Hall and nicknamed the “Crow’s Nest,” could seat up to 80 people.

When Rev. John J. Walsh, S.J. arrived at Marquette in 1951, the Players had already built a renowned reputation, and performances were held in the Medical School auditorium to host larger audiences. Walsh helped turn the Players into a national and professional program.

This program is still recognized today, and is known as the Marquette University Players Society.

Maaz Ahmed, a junior in the College of Communication, currently serves as the artistic director of the MUPS.

As the artistic director, Ahmed says he keeps the organization moving in the right direction and leads event planning and show programming throughout the year.

“The theater department is ever changing,” Ahmed says. “In my few years, we have doubled down on our social justice narrative, prioritizing producing theatre that features Black stories, stories written by and featuring strong women and stories that make people uncomfortable.”

Ahmed says he hopes to be a writer, director or producer in the live theater world one day and while his undergraduate focus is in direction and lighting design. Ahmed says he’s been writing for his whole college career and began producing his own work last year.

In addition to hosting large events for all theater students, MUPS also puts on four student-led shows a year.

“MUPS provides students the opportunity to perform and produce theater outside of the main stage season, as well as giving students opportunities to work in administrative theatrical positions,” Ahmed says.

Ahmed says the theater department at Marquette is a pretty small one, but it fosters a very close community. He says he spends a lot of time in the theater, and that they are always trying to stay busy.

A few years ago, Marquette’s theater department added the requirement for interested students to audition to the program. Hudson-Mairet says that really helped narrow down their selection to those who were really passionate about theater.

Within the theater department, students can choose from a selection of courses in acting, directing for stage and camera, theater history, scenery, light, costume design and more.

Outside of teaching at Marquette, Hudson-Mairet is a professional scene designer, creating props and scene backgrounds for actors.

“The technology has been meeting up the minds now,” Hudson-Mairet says. “There’s a lot of new digital technology and an increased use of projections and LED panels, so you can change the scenery a lot more dramatically.”

Mackenzie Possage, a 2016 theater alum, shares some of her experiences at Marquette and how it prepared her for a career in acting.

“The community (at Marquette) felt like a well-knit family that supported each other,” Possage says in an email. “I have felt similar dynamics in the regional theatre companies I have been a part of, but definitely miss it living in Los Angeles. We spent so much time together whether it be in class, working on shows, partying … we were like a little fraternity. I grew as a person in addition to as an actor.”
Possage says one of her favorite memories at Marquette was during the show “The Liar” directed by Jamie Cheatham, a current assistant professor and head of acting, digital media and performing arts at Marquette University.
“It was one of the first principal roles I got to portray while in school,” Possage says in an email. “I remember questioning my abilities prior to this production, but (Cheatham) gave me a lot of confidence and made me feel like I was a good actor.”
Possage attributes Cheatham and Maureen Kilmurry, an adjunct instructor in digital media and performing arts, as directors at Marquette who played a big role in her experiences at Marquette.
“I spoke majority of my lines directly out to the audience, sometimes being the only person on stage,” Possage says in an email. “It was one of the proudest moments I had as an actor.”
She says she specifically remembers the stage shaking when the audience laughed.
“I felt like crying from happiness and excitement from the moment before I walked on stage for the first time through to the curtain call. It was incredible. It was wild,” Possage says in an email.
Currently, Possage works in pre-production for a new media series called “Bound,” a fictional series regarding sex trafficking from the victim’s perspective. She says she also has a principal role in a commercial campaign for an app called AmpMe.
In the past, Possage says she was in a touring theatre company for two years in Chicago, where they performed originally-devised pieces on a 7 ft. x 5  ft. platform two feet off the ground. She says between 2016 and 2018 she was part of a show similar to Hamilton, called “The American Revolution,” a story of America’s history through a minority’s lens.
Possage says that while she primarily played roles on stage at Marquette rather than behind the scenes, the required classes like stagecraft, costume tech and directing gave her a well-rounded understanding of the demands of the production side of theater.
“I was able to meet all the department leads’ needs and demands and assimilate into the workplace smoothly and competently. The executives frequently commended me on my quickness and attentiveness and offered me additional work after post production finished,” Possage says in an email.
Hudson-Mairet says one of the most rewarding parts of being a professor at Marquette is seeing his students go out into the real world and apply what they’ve learned at Marquette.

“There was a week or so last year where I had a conversation with an Emmy winner, an Oscar winner, with someone who was working on the Oscars as a designer, a Tony nominee and a Tony winner … all of them Marquette graduates,” Hudson-Mairet says. “It’s like ‘where do you want to go?’ The degree will take you there.”