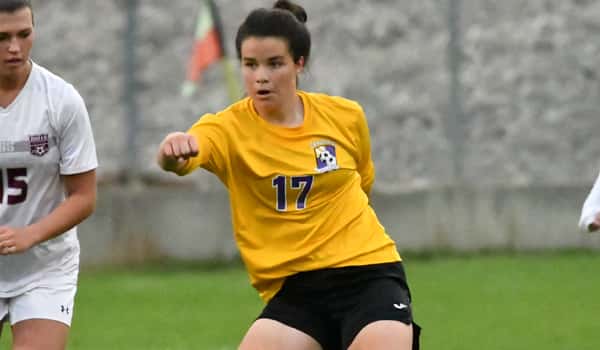 Many first-years Division I athletes don’t have the commitment to be both on the women’s soccer team and a member of the ROTC program. But Marquette’s midfielder/defender Aeryn Kennedy is an exception.

However, Kennedy is not the first student at Marquette to be involved in both programs.

Kristin Stoniecki, a 2007 graduate, was a part of the ROTC program as a student athlete. Stoniecki, a track and field athlete, transferred to Marquette her sophomore year, and holds multiple Marquette records in pole vaulting. She went on to be a White House nurse after graduating, and also won the 2020 Young Alumna of the Year Award.

Seeing another student athlete successfully taking part in the ROTC program has made Kennedy feel better about the commitment that is to come.

“It makes me feel better, because that is one thing — balancing time and scheduling. That definitely was a concern at first,” Kennedy said. “So far it’s going well.”

Although no one in her family has been in the military, Kennedy said she has wanted to serve since high school.

When choosing a school to commit to, Kennedy was looking for a soccer program that felt like home, as well as an ROTC program she could trust.  The Camdenton, Missouri native said that Marquette checked off both of her boxes.

“It had everything I wanted. It had a good engineering program. It did have ROTC and a great soccer program and just athletics in general and I know I like the location (of Milwaukee), so it just seems like a really great fit,” Kennedy said.

While she has not been on campus for long, Kennedy is already thought of highly of by both her head coach Frank Pelaez and ROTC advisor Lieutenant Jonathan Kappel.

“I’m really lucky that I get to know her, and that’s where she really intrigues me, because she’s got to be very disciplined and I love that,” Pelaez said. “I mean, you have to respect (being in ROTC and being an athlete) because not every kid will want to do that.”

For Pelaez, this is new territory, as he has never had anyone in his program also be a part of ROTC. Along with Kennedy, he is also adjusting to the change.

He said he admires Kennedy, not just for her commitment to both the soccer program and ROTC, but also for how she already handles herself like she is in the military.

“I think it’s funny because when I talk to her she’s already pretending that she (is) in the military.” Pelaez said.

Along with Pelaez, Kappel respects the attitude of the first-year from Camdenton, Missouri, despite only knowing her for a short period of time.

“I can tell you that she is definitely a motivated character,” Kappel said. “She definitely (has) a passion for this right now.”

Kappel mentioned Kennedy is a national scholarship student, going against students across the country to obtain this prestigious award. In order to win the award, the student must submit an application through Officer Recruiting Stations. From there, they are interviewed by a naval officer on why the want to be in NROTC and the military. They then go through various medical examinations to make sure the students meet the physical requirements for the scholarship. After this process, the application gets sent to a panel in the Great Lakes, who decides what students win this award. The scholarship process is very competitive, as just over 1,000 students win each year.

Although Kennedy is devastated that she is not in season, she is looking forward to adjusting to campus life and her ROTC schedule.

“I feel like having this time right now to work through it and get a feel for things on campus will definitely help me later on,” Kennedy said.

Having this time might be beneficial because right now as a midshipmen candidate, she is in the New Student Orientation, which calls for mornings starting as early as 5:30 a.m. In NSO, Kennedy is strictly around first-years for the first month of school as they are introduced to basic training.

Her daily schedule is packed with Marquette core classes, classes based on her major, NSO training and naval science classes that are required for all those in the ROTC program.

“On Tuesday mornings, right now they are conducting from 5:30 in the morning to 7:00 o’clock, and they have multi-instruction period basically, and that’s held by the upperclassmen involved in NSO, as well as the marine staff,” Kappel said about her schedule. “They tend to do a little bit of outside, kind of basics and fundamentals of the military.”

It does not stop there. Now, the women’s soccer team has also started in-person small group practices.

“On Thursday morning, we have something called PT, which is physical training, and they start at 5:30 and go till 7:00 in the morning,” Kappel said. “Thursday afternoons, from 3:30 to 5:30, we have reserved for something that’s known on their schedules and courses as naval science lab, but for us we just refer to this as drill.”

Kappel said drill involves more military training and general training, like sexual harassment training, and how they can keep and uphold the physical and mental standards in the military.

Although Kennedy is involved in two entirely different programs, she hopes she can take some of the skills that she learns from ROTC and bring them to the soccer field to elevate her game.

“I definitely think that I can bring awareness, because in the military, you will learn different things,” Kennedy said. “Definitely physical fitness, and my strength.”

At the end of September, Kennedy will graduate from NSO and officially become a midshipman. The real test will then begin and herr journey into the life in the military will begin.