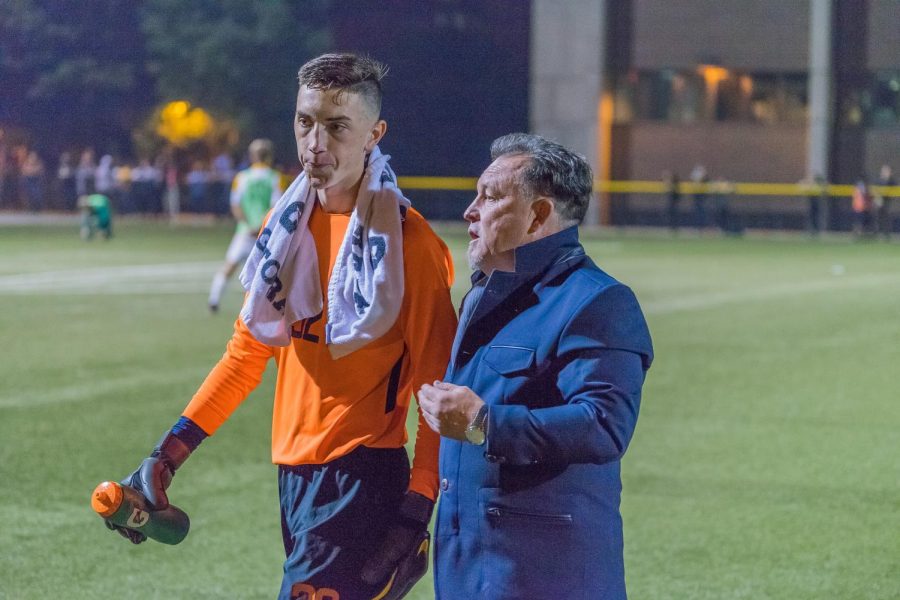 Weyman’s father played soccer at Worcester Polytechnical Institute, a private research university about an hour outside of Boston. Now over 30 years later, the Evanston, Illinois native finds himself playing at the same collegiate level that his dad once did.

“My dad, he’s been through everything with me with soccer,” Weyman said. “He never missed a game, he’s always in the stands, he’ll travel wherever for any game and I’m so grateful and thankful to have him.”

The redshirt sophomore got off to a strong start during his first season of play in 2019, posting a 4-4-1 record in nine starts in goal. He was also named BIG EAST Freshman of the Week at the beginning of the season and BIG EAST Goalkeeper of the Week after making two saves in a 2-0 win at Wisconsin and four saves in a 2-1 road win against Xavier.

“Those were two huge games because they were both on the road (and Xavier) was our first BIG EAST game on the road,” Weyman said. “It was just super memorable.”

Weyman is one of two Marquette goalkeepers to win BIG EAST Goalkeeper of the Week honors since 2015. Luis Barraza, who was eventually drafted by the New York City Football Club, earned the same accolade back in 2018.

“(The accolades) did give me some confidence and everything,” Weyman said. “It helped me adjust to the program, college and just the speed of play. It was definitely an adjustment period, and redshirting that first year definitely helped me a lot.”

Spending time under Barraza and learning how to be a team leader also helped with Weyman’s development as a keeper. Volunteer assistant coach Graham Shaw said being able to watch Barraza, who did everything required of him during his time at Marquette, would be beneficial to any player. Shaw is entering his fourth season with the program and works with the goalkeepers in addition to directing team camps.

“I know (Barraza and Weyman) trained a little bit together; after practices they used to stay and push each other,” Shaw said. “I think as much as it was the performance of Luis, I think it’s more the way Luis went about his game that’s kind of rubbed off on Jackson.”

Shaw said Weyman’s personality really started to show in his second year, once he felt more comfortable with the team. Weyman, the former Chicago Fire first team reserve training player, has been known to keep the mood light during practices.

“I know he likes to windup a few of the guys on the pitch during training when they’re doing finishing drills,” Shaw said. “That personality that he’s shown has been good for him and it’s been good for the team. I don’t know if there’s anybody on the team that he doesn’t have a good relationship with.”

Weyman’s teammates have also noticed his personality, on and off the field.

“Jackson is a goof. Jackson’s definitely a goof,” junior goalkeeper Cedrik Stern said. “He wants to win, he loves to win and he expresses that too, so sometimes his reactions are just really funny. It’s always funny being around him cause he’s just so goofy. It’s always a good time around Jackson.”

While keeping the team in high spirits, Weyman also has goals that aim to help the team during his time in the program. He said he hopes the team can win a BIG EAST Championship and make a NCAA Tournament berth, going on to make it as far as possible. In order to do so, Weyman said the team needs to continue to work hard and stay close on and off the field.

In addition to the team goals, Weyman is also looking forward to his personal growth with the Golden Eagles.

“Personally, I’m just looking forward to start playing with the guys again … and getting a bond,” Weyman said. “Individually, I want to learn from last year and the experiences I had and continue to grow as a top goalkeeper in the BIG EAST.”