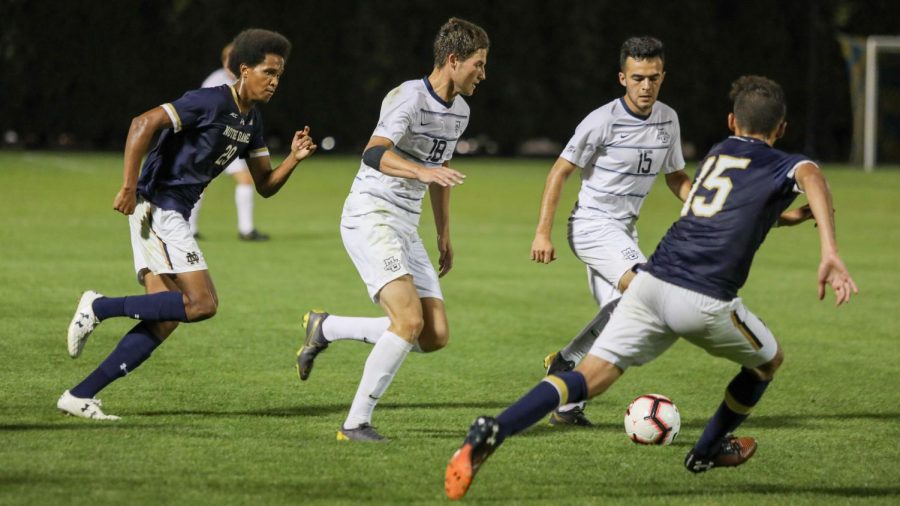 When the BIG EAST Conference made the decision to cancel all 2020 fall sports, it completely shifted the schedules for games and training for all, including the Marquette men’s soccer team.

This shift of scheduling is physically affecting the athletes in numerous ways. They are under the new athlete protocols in regards to being monitored and having to be tested for COVID-19 every so often.

Training this fall is still up in the air, in terms of the specifics of what the athletes can and cannot do. The process of figuring that out has begun with all athletes being tested for COVID-19 starting the week of Aug. 24 . The men’s soccer team had not had any tests come back positive.

Without being able to train together this summer, one big component of the team working together has been a few Zoom calls.

“Some calls are just checking in personally to see how the guys are, some are looking at the bigger picture,” associate head coach Sean Hughes said. “We’ve also done video breakdowns and tactical references for individual positions. Whatever restrictions are put on us, we’re going to find ways to stay connected.”

Head coach Louis Bennett understands Zoom calls aren’t the ideal way for their team to connect to one another, but he’s still trying to make the best of it and use it as a way to teach his players and help them bond.

“We’ve basically been laying out the expectations of what it’s going to be like and how to be a good student athlete in terms of being healthy,” said Bennett. “We’ve tried not to do anything longer than 45 minutes because that’s how long you need to pay attention for a half of a game.”

It hasn’t just been Zoom calls though, as the coaching staff also sent all players detailed workout plans for them to follow throughout the summer and leading into the fall. After being on campus for slightly less than a month, the green light to begin small-group practices occurred this week.

“It’s definitely harder having to watch our distance and keep to six feet at all times,” redshirt sophomore AJ Franklin said. “Especially in the weight room when your hands on and touching stuff, it’s just harder.”

Franklin did say that despite the challenges, he feels safe around his teammates and coaches, especially after the whole team tested negative.

Beto Soto, an incoming first-year, said that his challenges were more in terms of adjusting to a new environment rather than COVID-19. Now that he’s adjusted, he’s ready to play.

“It was difficult at first having to adjust to a lot of different things, but now that we’re not playing until spring it actually helped with getting to know the school and my teammates,” Soto said. “I trust Marquette and our coaches and I know they’re doing the best they can to make sure we get back on the field in a safe way.”

Despite the extended time to prepare for a season, the coaching staff still has worries, but they feel they may have enough time on their hands to build the team up to playing condition for spring.

“We have a big window of opportunity,” Hughes said. “Until we know what we can and cannot do, we have to be flexible. Our job is to be smart and to help minimize the risks.”

One of the main concerns Bennett has is the chemistry between the team and the extent to which players will be physically ready.

“In terms of the cohesiveness and quality in what we do, I don’t know. The proof will be in the pudding,” Bennett said. “I’m confident though that when we’re given the ability to train we’ll do it in the best way possible.”

Bennett mentioned that due to the depth of their squad, which includes six new first-years and five new transfer students, they may have an easier time limiting players’ minutes in games in order to preserve their health and stamina.

“I don’t expect anyone to play a 90-minute game this spring,” Bennett said. “It’ll depend on how training goes this fall, but we’re fortunate to have strength in depth.”

On top of it all, Bennett says the priority is getting back on the field in a way that is safe for everyone, and there is no guarantee of that as of right now.

“Until there’s a vaccine, there’s possible risk in everywhere you go and everything you do,” he said. “I have concerns about the whole process, but i’m not worried. I wouldn’t do anything I don’t believe is going to be okay for everyone.”

This story is written by Matt Yeazel. He can be reached at matt.yeazel@marquette.edu or on Twitter @MJYeazel.