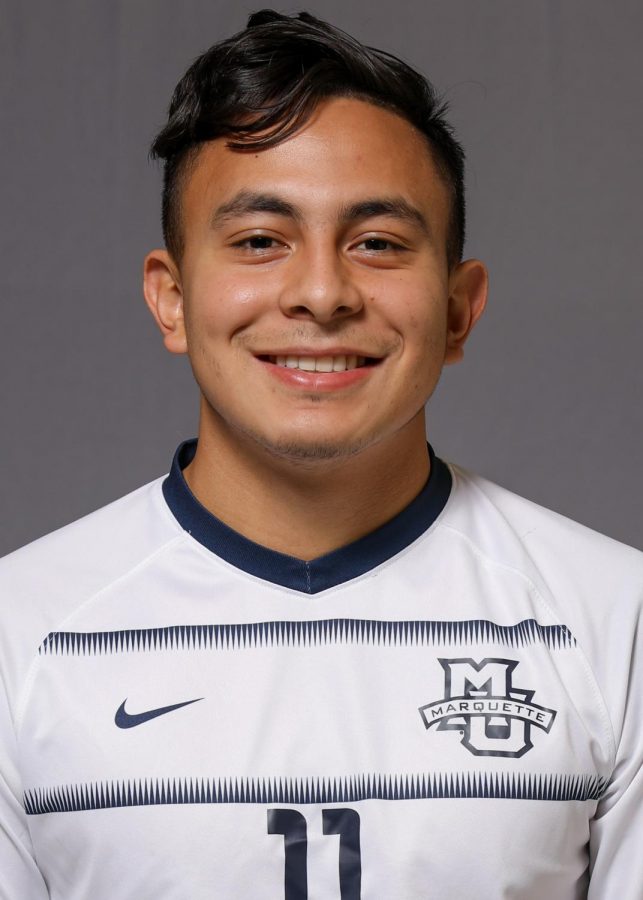 Beto Soto is a first-year on the men's soccer team. (Photo courtesy of Marquette Athletics.)

For many first-year student athletes, the collegiate level is a big step up in competition and physicality than what they are used to in high school, but for Marquette men’s soccer first-year Beto Soto, that is not the case.

Born in Houston, Texas, Soto played for the Houston Dynamo Under-19 team and even got some experience practicing with the Houston Dynamo’s Major League Soccer team. This is a huge accomplishment for a teenager who is up against stronger and faster soccer players, something that a normal high school athlete might not be used to.

Through the U.S. Soccer Development Academy, Soto spent many years improving his skills on the pitch by facing some of the best competition in the United States. In 2018, his team was named the USSDA Central Conference Team of the Year. Due to the COVID-19 pandemic, the USSDA ended operations in April due to financial hardships.

“Being in the academy for a couple of years really helped me out,” Soto said. “It definitely developed my game as it made me stronger, faster and smarter, which will hopefully help me at the next level here at Marquette.”

Newly appointed associate head coach Sean Hughes was involved heavily in getting Soto to continue his athletic career at Marquette.

“When we went down to Houston and watched him play, we saw that he was a standout player that has special talent,” Hughes said. “The academy that he came out of does a great job of producing the best talent and I know his experience with the Houston Dynamo’s first team will make him better and become a great college player here at Marquette.”

After talking back and forth with Hughes, it didn’t take long for Soto to see where his heart was wanting to take him.

“As soon as I visited Marquette for my official visit, I knew this was a place I could call my next home.” Soto said.

After losing star seniors like forward Josh Coan and midfielder Luka Prpa last year, Soto is poised to fill in those roles on the offensive side of the ball for the Golden Eagles.

“Beto flourishes when he has the ball and he’s on the attack,” head coach Louis Bennett said. “He is a very skilled player when it comes to dribbling the ball and I think he will help fill in the role of some of our seniors that we lost from last year.”

Making the transition from different programs can be hard, but Bennett believes Soto will fit in just fine at Marquette.

“Hopefully he will acclimate really well with our team after coming from the academy,” Bennett said. “Here at Marquette we try to be as professional as do some pro club teams, so in that sense Beto will fit right in.”

Throughout quarantine Soto stayed in Texas and trained with a few of his Houston Dynamo coaches to help keep him in shape, as well as took part in many Zoom calls with his new teammates to get to know them better.

“I’m looking forward to finally getting back on the pitch with my new teammates and just doing what I love to do most,” Soto said.