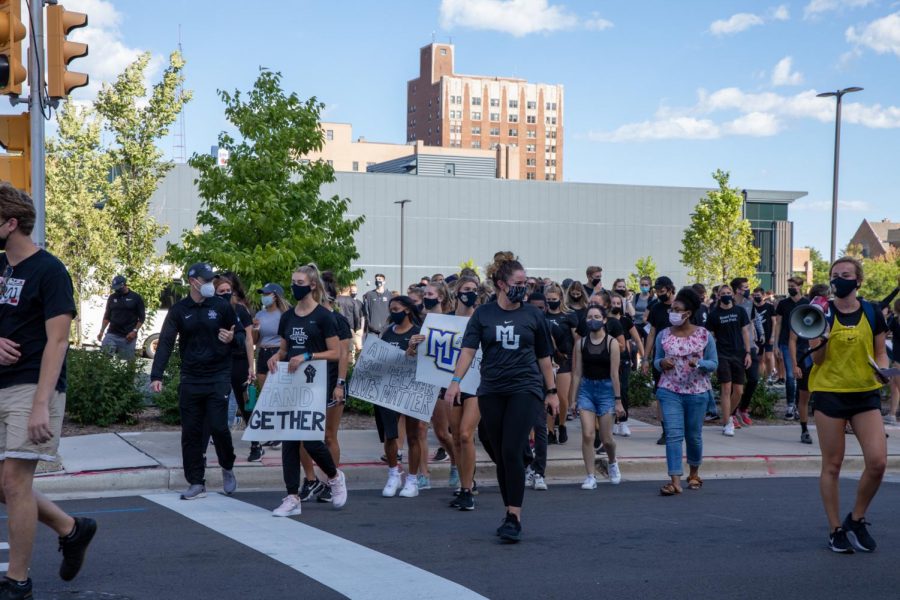 If you were to ask about Marquette women’s soccer assistant coach Erin Scott, the same word is shared among three different coaches: passionate.

“She just embraced her job with us as a graduate assistant,” Valparaiso University women’s soccer head coach John Marovich said. “She was like a full-time assistant coach. She was in the office all the time. She just worked, and you could just tell she has a passion for the game, passion for the goalkeepers.”

It is part of the reason Scott wanted to get into coaching in the first place — the idea of being on a team and sharing her experiences from playing as a Division I goalkeeper. These two assets have served as a catalyst to her coaching journey.

“That’s a big piece of what led me to coaching,” Scott said. “The idea that I had so much to pass on, and so much to be able to teach and help with that. If I could just help one other person through whatever struggle or whatever success that they may be going through, then it would have all been worth it to me. I didn’t want to let that opportunity just pass.”

As a goalkeeper at Campbell and Creighton University, Scott got her first glimpse of coaching at developmental camps, including Camp Shutout in Milwaukee which is run by Stan Anderson.

“I always have enjoyed coaching camps because it gives you an opportunity to make an impact on a younger player,” Scott said. “That one day could change things for a lot of them or they could learn way more than they thought they ever would. I always tried to teach rather than just observe, because even though they may be at a camp or a college ID camp to be seen, it’s a great teaching opportunity.”

When Scott’s playing days came to an end in the fall of 2018, Scott spent the 2019 spring semester as a student assistant coach with the Camels.

Following graduation from Campbell, the two-time Big South Defensive Player of the Week found her way back to the Midwest as a graduate assistant at Valparaiso.

Marovich recalls the decision to bring Scott on as staff, a rather easy decision after talking to two people — Samar Azem and Anderson.

Marovich said the previous graduate assistant recommended Scott for the job. After also speaking with her coach at Campbell who told him that she was energetic, passionate and just a good individual person, Marovich was set on making the hire.

Scott took on several responsibilities with the Crusaders such as handling travel arrangements, food reservations and serving as the primary goalkeepers coach. Marovich said Scott even reminded him of himself as a young coach.

When the Marquette women’s soccer head coach Frank Pelaez was at Loyola Chicago, he tried bringing Scott on staff, but was unable to.

When he took over the program where he was once was an assistant coach for 19 seasons, he saw the same eagerness in her that he saw this past summer during remote training due to COVID-19.

“She’s so eager to do everything and anything she can to help me succeed and help Steve (Bode) succeed,” Pelaez said. “That’s kind of a really cool trait to have.”

Pelaez said Scott is a “student of the game,” which has helped put her beyond her years as an assistant coach.

“She will ask to do something, even if she has great ideas. She will ask what do you think about it, where a person at that age usually says, ‘We should do it this way,’” Pelaez said. “She has great ideas and great input, and a lot of things that we’re trying to do, but she’s always asking, ‘What do you think about this way?’ She’s not an ‘I know it all because I’m young,’  it’s more of, ‘I still want to learn, but I do have ideas,’ and I think that makes a big difference.”

As the young assistant coach develops her coaching philosophy, she thinks back to her playing days to build the type of environment she wants to instill within the goalkeepers unit. Scott is aiming to make sure they are always pushing each other and thinking of the goalkeepers as a unit.

“I don’t like to think of goalkeepers as individuals, even though the position is very individualistic. A session can’t run to its peak performance if we’re thinking individually,” Scott said. “Goalkeepers are only as good as your weakest link, because at the end of the day and a session, even though one goalkeeper may be making the save, if the service wasn’t correct or where it needed to be, or with the right amount of power, then that goalkeeper that wouldn’t be able to get any better.”

Pelaez praised Scott’s ability to connect with the players, which he says is a strength on the recruiting trail as much as it is with the current players.

“I could put myself in an 18 to 21-year-old’s shoes, but it’s not going to be the same,” Pelaez said. “Having her ability to speak the same language, but still (have) respect is very important.

Pelaez said that Scott can use the same language as those on team, while still remaining very mature about the way she talks.

Sophomore goalkeeper Mel McNamara seconded her head coach’s words. The Bethesda, Maryland native said in August that addition of Scott to the program is great, especially for young players like herself.

“I love Erin,” McNamara said in August. “It is really nice having someone who is younger and has had experience in the BIG EAST and playing Division I soccer. She is very helpful and really understands us and what we go through on and off the field. She is very easy to talk to and get along with.”

Scott mentioned she has future aspirations to be a head coach one day, but is “very lucky” to be in the spot she is today with the Golden Eagles.

Creighton women’s soccer head coach Ross Paule, who coached Scott from 2015-16, said the fact that Scott is now coaching in the same conference she once played in is unique.

“It’s amazing to see our players stick in the game, especially the ones that have her mindset and personality to be a difference-maker,” Paule said. “That’s the one thing about her, she’s going to be good at coaching, she’s going to learn her craft and work hard on it because she has a purpose of trying to make a difference.”

Scott is treating the first time she coaches against Creighton and Paulie as just any other game, but it will still be one she remembers.

“Obviously I thought about it,” Scott said. “I don’t like to think too much into all that. Everyone has what a rival is in their head, but obviously I’d be excited about a game like that either way but I am just looking forward to getting back on the field with the whole group regardless of who we’re playing.”

This story was written by John Leuzzi. He can be reached at [email protected] or on Twitter @JohnLeuzziMU.