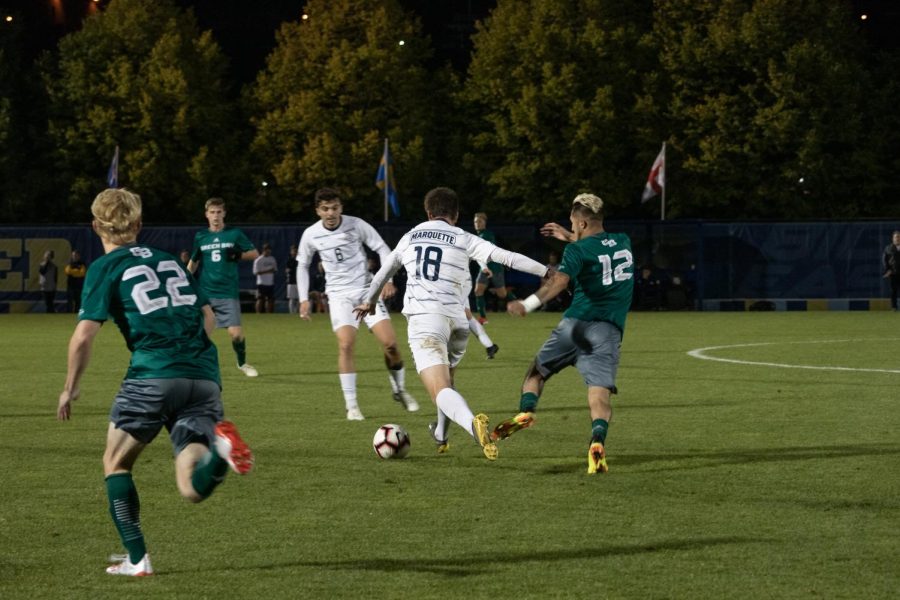 AJ Franklin (18) works his way past a Green Bay defender.

Although the BIG EAST cancelled the fall 2020 season, the men’s soccer team is ready to get back into action with the possibility of having a season in the spring.

While the BIG EAST has not implemented any mandatory roster rules or guidelines for the spring season, head coach Louis Bennett said that the conference is not differentiating between the guidelines that the NCAA has already come out with. Some of these guidelines include maintaining a social distance of six feet in training facilities, using hand sanitizers regularly and to avoid any team activities if you are feeling ill.

“There’s still a little work to do before we can actually have a roster that will be playing a competitive season, but that’s the intention,” Bennett said. “As long as people are eligible, I think they get this season.”

Due to the unique circumstances that the COVID-19 pandemic has created, the offseason will now occur during the winter months, a time where training and practicing could potentially become more difficult.

Fortunately, Marquette has the Marquette Dome at Valley Fields, but there could be restrictions on how many people are allowed inside.

Redshirt sophomore forward AJ Franklin said he hopes the team will be able to utilize the indoor facility so that they can still be in relatively warm temperatures, rather than outside in the freezing cold.

For Franklin, the main focus right now is getting prepared for the potential season in the spring.

“Honestly, I’m trying to just focus on what I have to do to prepare,” Franklin said. “That’s going to the field, running and working out, and just trying to stay in shape so I’m well-prepared for the spring season … I’m just excited to get back out there.”

Franklin saw action in 13 games last season for the Golden Eagles, recording 342 minutes of play. For some players that do not already have experience with the team, like first-year Beto Soto, this was not how they expected their Marquette careers to begin. Through these are challenging times, veterans on the team have been able to make younger players like Soto feel comfortable despite all of the changes.

“Since the moment I got here, they’ve made me feel at home,” Soto said. “They always kind of give me advice in school, and in the field. So that’s a big shoutout to them.”

Soto, a native of Houston, Texas, said he will likely stay on campus during the winter break to practice and hang out with teammates, rather than going home. Despite the possibility of not being home for awhile, Soto is looking forward to getting on the field and playing with his new teammates in the spring.

Bennett is also aware of the importance of the team’s veterans this season.

“A lot of the returning guys will want to gravitate to responsibility of implementing some of our standards and some of the ways we do things to not only the six incoming freshmen, but the five transfer students,” Bennett said. “I think we have good characters that will be able to do that.”

Among all of the changes and new plans, player development has still remained strong within the program. The Golden Eagles have produced multiple Major League Soccer players in the last three years such as Luis Barraza, Patrick Seagrist, and Luka Prpa.

“In some ways, we’ve got to look for the positives,” Hughes said. “I think that (more time to get players acclimated) is one of them.”

Hughes said that it is usually difficult for the incoming group of players to get up to speed at the college level, but now with a pushed-back season, coaches have more time to get the entire team game-ready. There has been plenty of time to work with players prior to the start of the season, rather than having to work with them as the season is just beginning.

As of right now, a spring season is not guaranteed, but both the coaching staff and players alike are remaining hopeful. Bennett said that the conference schedule would likely look the same, and is even optimistic about the possibility of playing non-conference teams within driving distance.

One thing is for certain: Everybody in the program wants the team to get back onto the field as soon as possible, but getting back into peak condition will still be a process.

This story was written by Nick Galle. He can be reached at [email protected] or on Twitter @thenickgalle.