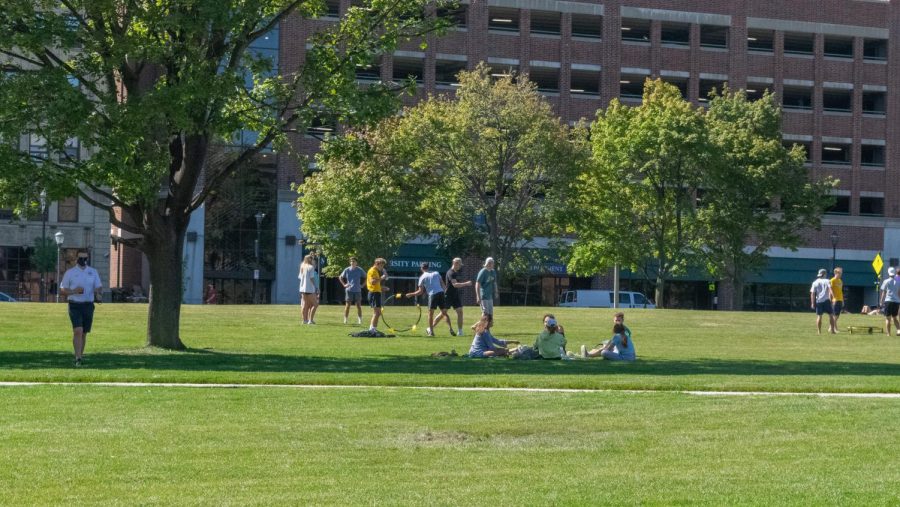 Marquette earned an 88/99 on the green scale rating by the Princeton Review.

With many students back on campus for the fall semester, the quad and extra green space where the new business school will be built seems more populated than usual. During the day, students can be found sharing a meal with friends, or playing outdoor games such as spikeball and frisbee, in the extra space.

For students who have experienced Marquette’s campus outside of the pandemic, the use of the green space is recent.

“I think I noticed (the green space) because I liked that Marquette had grass and trees, but I never really utilized it,” Lizo McMahon, a junior in the College of Health Sciences, said. “I mean, I saw a dude making a snowman once, but that is more white space and not green space.”

McMahon said she picked Marquette because it included some nature while still being in a large city. Though McMahon had not spent much time in the green space before, she recently had a picnic with her roommate and friend where the new business school will be located.

“It’s so pretty because it makes campus seem much more open,” McMahon said.  “Whoever the landscapers were did a pretty good job.”

Lindsey Craig, a sophomore in the College of Education, said she thinks eating outside is a good way for her to hang out with her friends.

“For me, a big thing has been getting food with other friends and eating outside,” Craig said. “We pretty much will always eat outside and so that’s been really nice.”

Prior to utilizing the space this year, Craig said she noticed lots of people laying in hammocks around campus. Craig said she also noticed Marquette has spaced out more tables on campus, and said she thinks it was a good idea.

Craig also said she thinks it is good that students are spending time outside, especially with more classes being online.

Amanda Sedlak, a junior in the College of Health Sciences, said she has noticed more students outside as well.

“I see people studying, picnicking, along with a lot of spikeball and frisbee,” Sedlak said.

Sedlak also said she likes seeing students using the space and when they actually build the business school, it will be weird.

With so many students using the green space, some students shared other ideas for what the space could be utilized for instead.

“Even a club could have a meeting and have everyone socially distanced and still have masks to add extra protection,” McMahon said.

McMahon also said we could even at “get-to-know-you” spaces that are socially distanced on the green space.

Sedlak said it could also be cool if smaller classes started meeting there too, and Craig said she thinks the outdoor space would be a good place for a floor meeting for students still living in residence halls.

Though there may be concerns related to social distancing, McMahon said she actually thinks it is a good way for people to hang out, especially those who want to spend time with friends they haven’t seen in months, and actually maintain six feet of distance easily.