New mindset comes to life for the women’s soccer 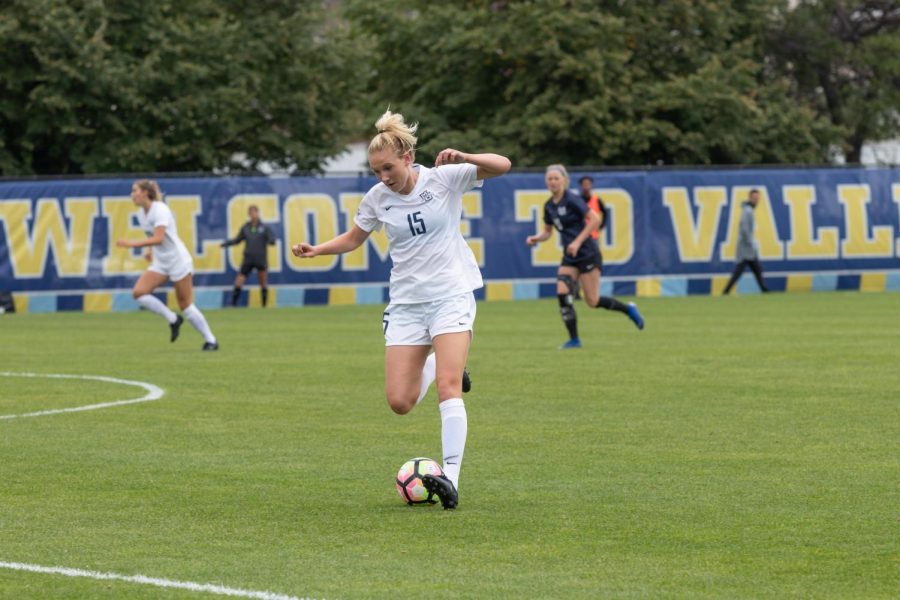 Forward Alyssa Bombacino (15) prepares for a kick in a match against Utah State last season.

When a new head coach is introduced to a sports program, some people may be skeptical of the old era closing. However, for the forwards on the Marquette women’s soccer team, they found the introduction of head coach Frank Pelaez to be a fresh start.

“There’s an advantage because you just get a clean slate, like nothing that you did last season matters,” junior forward Macey Shock said. “Everyone is just back to being a freshman trying to prove themselves.”

Adjusting to a new coaching style can be challenging, but these trying times have made it especially hard since they have not been able to truly practice together on the field yet.

Hired back in December, head coach Frank Pelaez has implemented a new style of play for the women’s soccer team. He is focused on giving athletes a positive mindset coming into the new season.

“On and off the field, he’s just brought in a completely new mindset, and I think he has gotten us all more motivated and excited for the next season,” junior forward Alyssa Bombacino said.

Pelaez has made it his goal to get to know the girls and establish a true connection with them before they are able to officially come together. Before they were sent off campus in March, Pelaez started to share his ideas for the season and his routine for practices and games.

“It was really hard for us because we had a new coach and we’re still getting to know him and how he does things,” Shock said. “He was trying to get to know all of us and how we play and how we like to do things.

Nevertheless, players have already noticed a positive change with the switch in coaches. Pelaez demonstrates a new outlook on communication with the athletes.

“He’s definitely a lot more hands-on and willing to help people learn their mistakes and do better,” sophomore forward Shelby Fountain said. “They (coaches) just motivate us all really well.”

Although the players have not yet been introduced to a new offensive scheme, they are taking advantage of this new program under head coach Pelaez.

Shock said the team will be able to try new things once they get out on the field. The team is not afraid to experiment and is eager to test their limits of what they can do.

“We’re all kind of on the same playing field now,” Shock said. “None of us really knew his style or anything like that.”

When players are cleared for practice, the true test will begin for the program to see if they can make a smooth transition from last year’s dynamic.

Along with having to adjust to a new coach, athletes also have to rebuild confidence and trust within the forward squad after the unexpected break. Since the first-year class has not been able to meet the rest of the team due to the pandemic, having to learn how everyone plays together will be a big focus at the beginning of training camp.

“I don’t know how people play and things like that. So there’s definitely going to be a trust element that I feel like might be missing,” Shock said. “But I think we’re all really close, and we all stay connected in many ways. So, I think in that sense, just getting to know each other is just a little backwards.”

Shock said it could be a blessing in disguise having to go through the process now, rather than later in the season.

The squad has a lot of new transitions to adjust to this coming season, but forward Alyssa Bombacino has no doubt that this will be a good challenge for the team to get through, as it will bring them closer together.

“Obviously it would have been nice to get to know the coaches a little better and have more time since they’re also new,” Bombacino stated, “But I think this just is another challenge for us. And I think all the coaches handle it really well and had a good mindset.”

Bombacino said that the team has a plan of what they are going to do once they get back together and they will make the best out of the situation.