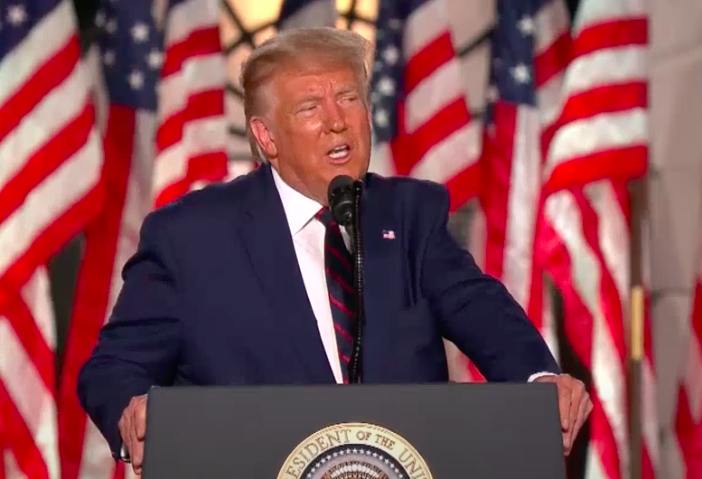 As President Donald Trump began his second address at the Republican National Convention August 27, he sent his thoughts to those who have been impacted by Catagory 4 Hurricane Laura, which made landfall in Louisiana, emphasizing that “we are one national family.”

He addressed a crowd of 1500 people, mostly unmasked and not socially distant, at the White House Thursday night. Trump accepted the Republican presidential nomination on August 24, the first night of the RNC.

“We will rekindle new faith in our values, new pride in our history and a new spirit of unity that can only be realized through love for our great country,” Trump said.

He said America is not a land that is cloaked in darkness, instead it is “the torch that enlightens the entire world.”

Referencing numerous past presidents and events like Pearl Harbor and the Civil War, Trump said that like Americans before, “we are meeting this challenge.”

“This election will decide whether we save the American dream or whether we allow a socialist agenda to demolish our cherished destiny,” he said.

Trump told attendees about his “pro-American immigration” policy, taking on Big Pharma and passing Veteran Affairs Accountability and Veterans Affairs Choice. He discussed the 300 federal judges and two Supreme Court justices he will have appointed by the end of the term.

Trump went on to say that he has brought prosperity to inner cities, claiming that he has “done more for the African American community than any president since Abraham Lincoln, our first Republican president.”

Trump also said he has done more for African Americans in the past three years than Biden has in the last 47 years.

Trump focused on the Middle East, where he said he achieved the “first Middle East peace deal in 25 years” by moving the US Embassy to Jerusalem. He also discussed “rebuilding” the military and the creation of the Space Force.

He talked of the nation’s response to the coronavirus pandemic, thanked first responders and Vice President Mike Pence’s response team and discussed national efforts such as the production of ventilators and the financial relief package that was enacted.

Trump said the U.S. will have a “safe and effective vaccine this year.”

“Over the past three months, we have gained over 9 million jobs, and that’s a record in the history of our country,” he said.

The United States’ current unemployment rate is at 10.2% according to the U.S Bureau of Labor Statistics.

Additionally, Trump vocalized his support for law enforcement by condemning riots, looting, arson and violence and criticizing leadership in Democrat-run cities. He also referenced his executive order to create a 10-year sentence for taking down monuments or statues.

“As long as I am president, we will defend the absolute right of every American citizen to live in security, dignity and peace,” Trump said.

He also touched on “cancel culture,” stating that the goal of it is “to make decent Americans live in fear of being fired, expelled, shamed, humiliated and driven from society as we know it.”

Trump went on to outline his campaign platform, including his support for the Second Amendment, strong borders and reduced taxes. He also mentioned supporting Medicare and Social Security, as well as an increased presence in space.

“Our country wasn’t built by cancel culture, speech codes and soul-crushing conformity.  We are not a nation of timid spirits.  We are a nation of fierce, proud and independent American patriots,” Trump said. “Together we are unstoppable.  Together, we are unbeatable, because together we are the proud citizens of the United States of America.”