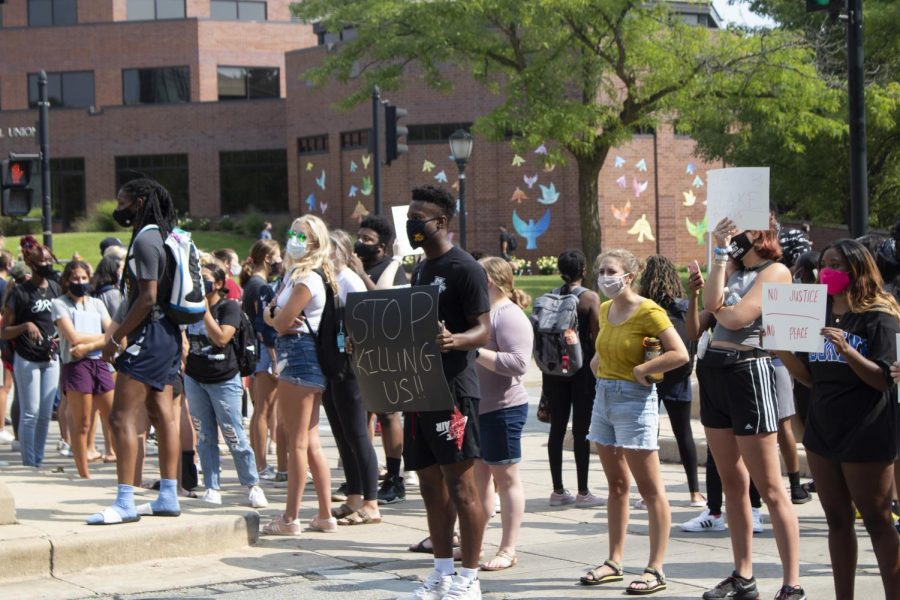 Last week, Black students presented a list of demands to Marquette administrators. They agreed to meet this week.

More than 60 students gathered Thursday to protest the recent racial injustices in Kenosha, Wisconsin, after Jacob Blake, a 29-year-old Black man, was shot seven times in the back by a police officer.

“We see injustice and inequality in our police system and beyond and that is what we are here to protest today … I can’t think about school and I can’t think about basketball because a lot of my teammates and myself are fearful of the fact that we could be next,” McEwen said.

McEwen said he, as well as other members on the basketball team, are committed to using their platform to bring awareness to the injustices that Black individuals face “because it’s something that is bigger than basketball.”

Vice President of Student Affairs Xavier Cole was also at the protest. He said he thought it was wonderful to see students in a peaceful protest and allyship.

“Our students are being a voice for the voiceless and are amplifying voices that need to be heard,” Cole said.

Breanna Flowers, a junior in the College of Arts & Sciences, stepped onto the median to address the crowd. She told the crowd that she can never escape her race and should not have to.

Flowers said she was tired of living in fear in the country, state, city and campus that she lives in.

“I’ve been dealing with the same stuff since I got to Marquette and nothing has changed. I feel more at home on other campuses than I do at Marquette and that is not right,” Flowers said.

After chants of ‘Black lives matter’ and ‘no justice, no peace’ rang out, Flowers said that being a student on Marquette’s campus can make Black students feel ‘othered,’ to which others in the crowd agreed.

Lonny Clay, a sophomore in the College of Arts & Sciences, shared his own experience where he felt threatened by cops. Clay then listed the names of numerous Black men and women who had been killed by police. He said that this is why he “can’t feel safe around cops.”

After more than an hour of speeches and chants in the crosswalk, the crowd marched to Zilber Hall to enact a sit-in. The crowd of students were met by multiple Marquette administrators once they were inside, including Provost Kimo Ah Yun and William Welburn, vice president for inclusive excellence.

The group of students said they felt like the administration’s response was underwhelming, as they repeatedly alluded to previous documents that they gave to administration about demands that were never met. Flowers told the administrators that Black students on Marquette’s campus have been working for years to make change and yet nothing has happened.

Upon his arrival, the group insisted that Lovell put their demands into a legally binding contract that he and other staff members would sign to ensure that change would come.

Lovell responded that he would be willing to establish a memorandum of understanding of the group’s demands stating that such a document was “legally binding.”

The group members found that memorandums are not legally binding through searching the document type on the internet.

The group also brought up Lovell’s son’s remarks on social media, Lovell’s salary and how “that money could be going toward helping Black students.”

After calling for Lovell to take notes, the crowd expressed a list of 20 separate demands they had for Marquette administration, including increasing Marquette’s Black population by at least 50% to reflect the Marquette community that surrounds campus, to hire at least five more Black counselors and therapists, to place more Black-owned businesses on campus and provide the Black Student Council an ongoing and direct line of communication to the university’s administrators and police department.

The group insisted that each demand be placed into a legally binding contract that would then be signed by Lovell. In response to these demands, Lovell said that he would be happy to discuss them Sept. 3.

Editor’s Note: A previous version of this article included photos of individuals speaking. After publication, it was requested to remove those photos and to only include group photos to better reflect the movement.

This story was written by Beck Salgado. He can be reached at beck.salgado@marquette.edu.