Plan of attack to get back on the field 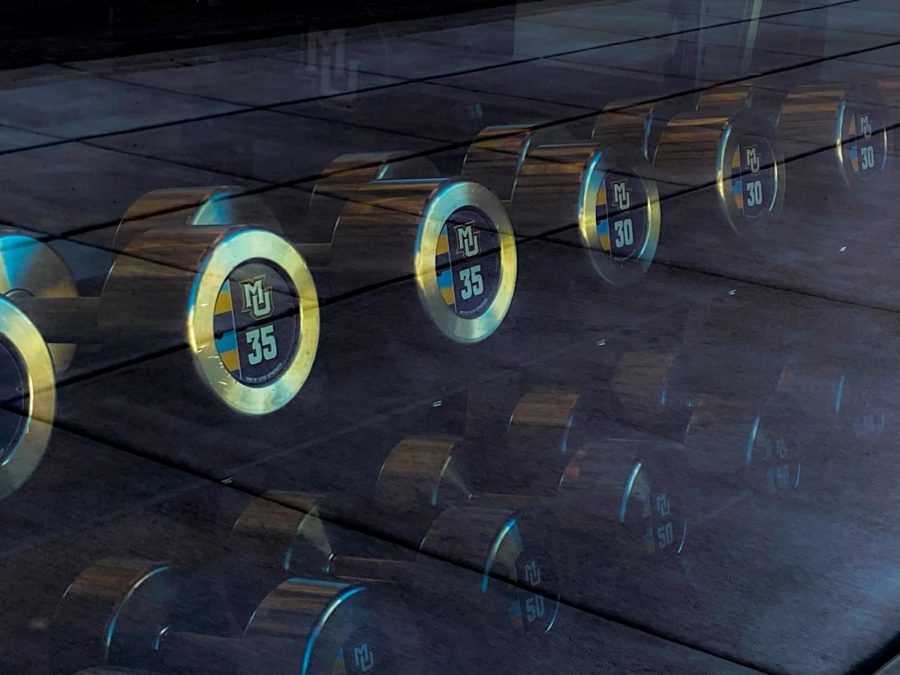 The weights at the Athletic & Human Performance Research Center.

For many college coaches this summer, their focus was on helping their athletes prepare for the fall season. When the BIG EAST decided to postpone fall sports for 2020, some of the coaches had to quickly come up with a new training plan.

“We obviously had a shift in preparation, knowing that now, instead of a fall season, we (are) preparing for a spring season,” assistant strength and conditioning coach Emily Jacobson said. “And my job as a sports performance coach is to help prepare the student athletes for the demands and rigors of competition and training, and to support the coaching staffs with any type of information from practice plans to technology, to help plan and prepare the student athletes again for those competitions and trainings.”

With the student athletes returning to campus, Jacobson and the rest of the Marquette women’s soccer staff are gearing up for training and practices to start. The women first have to undergo a first round of COVID-19 tests required for all Marquette student athletes.

After they are cleared for action, the players still have to go through a series of paperwork regarding if they have been feeling symptoms before returning to their regular training in order to ensure a safe return for not just the athletes, but the entire women’s soccer program.

Since the athletes were training by themselves this summer, coming back to campus will definitely be an adjustment. The coaching staff wants to assess the fitness levels of all the players, to establish a baseline for the level of intensity for each practice and also figure out how they can slowly ramp up the pace.

Jacobson said if the players are cleared medically, the sports performance staff will run through a short phase of assessments.

“We want to get where they are right now. Is it good or bad?” Jacobson said. “We have time right now and we’re going to start slow to then make sure everyone’s in an appropriate spot to start, and then gradually increase their workloads, whether that’s what they’re doing on the soccer field or on the court. And then obviously gradually increasing what they’re doing in other capacities in the weight room.”

To keep the athletes on top of their training this summer, Jacobson sent out summer workout packets with training plans to each of the players, and some, like sophomore defender Addie Shock, used those workouts to focus on getting stronger.

“I’ve been given specific workouts by Emily and Kenny that really helped me get back on track. The break has helped a lot and allowed me to get stronger,” Shock said. “I just kind of saw it as a time to get better.”

Shock believes the team is in good hands with Jacobson and the rest of the training staff to get back in game-shape this fall.

“Emily, Kenny, and Frank have learned a lot from other universities and they’re going to ease us back into it for sure,” Shock said. “Hopefully we can stay safe and keep following the protocols and then eventually get back in the team trainings and stuff.”

The coaches know that the transition from fully remote training to getting back in the weight room can be difficult for some, but redshirt senior defender Maura Weaver has previously dealt with having to adjust her fitness levels after being away from the game over quarantine.

“I’ve had my trials with injuries and having to come back from some pretty serious injuries where my fitness level was essentially zero,” Weaver said. “So, I know kind of what to expect from a difficulty level in some ways. So you know, I think at the beginning of whenever you’re coming back and trying to get your fitness level up, it’s always a little bit of a shock to the body.”

Even with these protocols and a summer away from campus, Weaver seems confident that her and the rest of the team will be able to stay focused through training and get back in shape.

“We (have) to stay focused. You got to keep your head on straight,” Weaver said. “Even with all these changes, and I think for the most part right now, the girls have been doing a great job with that. There’s always light at the end of the tunnel and we just got to be ready to storm through the tunnel once we get there.”

As Weaver is a veteran on the team, she feels that she has the opportunity to be someone that her teammates can look to for guidance. She knew what she needed to focus on while being at home and now is ready to preform with her team once again.

“Being an older player, now I’ve gone through summers. I usually live at home, so I’m trying to do workouts on my own at home. So, having that experience of going through a summer, trying to get my fitness up and get touches on the ball, that for the most part was pretty normal for me,” Weaver said. “As far as being on your own and working out this summer, you just got to keep your mind straight, (and) focus on the end goal.”