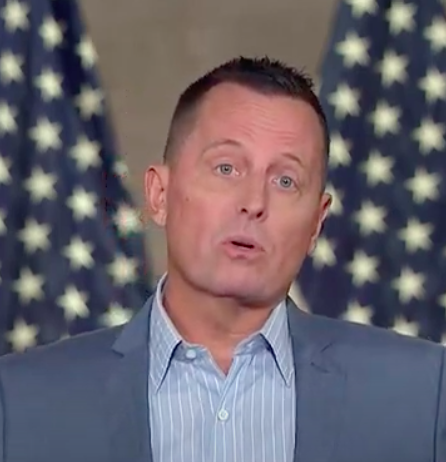 Richard Grenell was one of the speakers on the third night of the RNC. Screenshot from RNC livestream.

Former Acting Director of National Intelligence Richard Grenell began his speech at the Republican National Convention on Aug. 26 by discussing President Donald Trump’s approach to the war in Afghanistan and the invasion of Iraq. He said Trump “called America’s endless wars what they were: a disaster.”

Grenell said that Democrats and Republicans in Washington began to pursue “unlimited globalization” through allowing China into the World Trade Organization, nation-building in Afghanistan and trying to “export democracy” to Iraq. He also listed the nuclear deal with Iran and the climate agreement in Paris as further examples of this.

All of these things, Grenell said, led American jobs to decline and wages to stagnate.

He then went on to discuss how he feels that his time as U.S. Ambassador to Germany allowed him to see Trump’s “America First” foreign policy.

“I wish every American could see how President Trump negotiates on their behalf,” Grenell said.

He said he feels the Trump administration has truly made the American people and American security its priority.

“The DC crowd thinks when they call Donald Trump a nationalist they’re insulting him,” Grenell said. “As if the American president isn’t supposed to base foreign policy on America’s national interests.”

Grenell said that a return to the “Biden way of thinking” would be “giving the radical terrorist regime in Tehran a plane load of cash in the middle of the night.”

He contrasted this by commenting on the airstrike by Trump on the “head of Iran’s terror machine,” referring to General Qasem Soleimani.

However, Grenell offered support for those who take tremendous personal risk to seek freedom.

“We will always stand with the people who fight for their God-given freedoms,” Grenell said of those standing up to injustice in Hong Kong, Tehran and Minsk.

Grenell claimed that Democrats “blame a global pandemic that started in China on President Trump.” He then likened it to talks of Russian interference being the reason for Secretary Hillary Clinton’s loss in 2016. Grenell heavily criticized the Democrats’ investigation into Russian interference, saying it made him sick.

“They never want the American people to know who’s actually calling the shots,” Grenell said, of Democrats in Washington. “But with Donald Trump … you always know exactly who is in charge.”

“With Donald Trump and Mike Pence in the White House, the boss is the American people,” Grenell said. He circled back to the theme of “America First” and once again commented on Trump’s foreign policy to close out his speech.

“America First is simply the belief that politicians should focus on the equality and dignity of every American and that this duty is fulfilled by promoting the safety and welfare of the American people above all else,” Grenell said.“That’s the Trump doctrine and that, my friends, is four more years.”

This story was written by Grace Dawson. She can be reached at grace.dawson@marquett.edu.