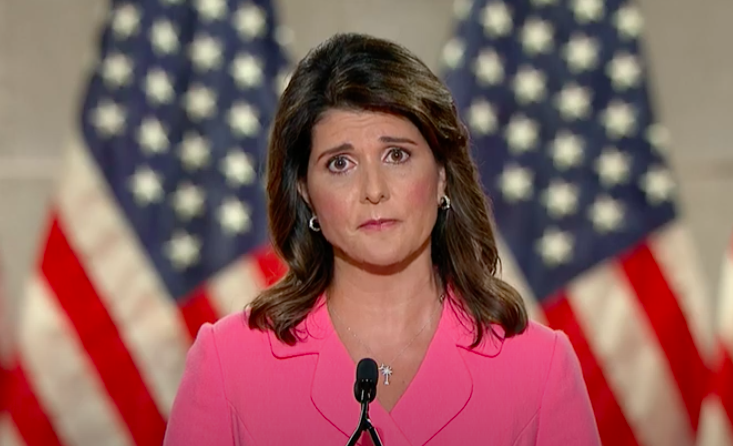 Nikki Haley spoke on the first night of the Republican National Convention. Screenshot from RNC Livestream.

Former governor of South Carolina and 29th ambassador to the United Nations Nikki Haley spoke at the Republican National Convention Aug. 24., starting her speech with a story.

“It’s about an American ambassador to the United States, and it’s about a speech she gave to this convention. She called for the reelection of the Republican president she served, and she called out his Democratic opponent – a former vice president from a failed administration,” Haley said.

She said the year was 1984 and the president was Ronald Reagan.

“It was an honor of a lifetime to serve as the United States ambassador to the United Nations,” she said. “Now, the UN is not for the faint of heart.”

She said that at the UN, she came in contact with people whom she described as dictators, murders and thieves. Haley said these individuals denounce America and then demand the United States pay for “their bills.”

“President Trump put an end to all of that,” Haley said. “With his leadership, we did what Barack Obama and Joe Biden refused to do.”

Haley said Trump stood up for America and stood against our enemies by passing tough sanctions on North Korea, ripping up the Iranian nuclear deal and moving the United States embassy to Jerusalem, Israel.

She said that Donald Trump has put Americans first during his presidency.

“At home, the president is the clear choice on jobs in the economy,” Haley said. “He’s moved America forward while Joe Biden has held America back.”

She said that Trump is leading with a new vision.

“Before communist China gave us the coronavirus, we were breaking economic records left and right,” Haley said. “The pandemic has set us back but not for long. President Trump brought our economy back before and he will bring it back again.”

Haley said that Trump knows that “political correctness” and “cancel culture” are dangerous and wrong. She said it is common in the Democratic party to label America as being racist.

“America is not a racist country,” Haley said. “America is a story that is a work in progress. Now is the time to build on that promise and make America freer, fairer and better for everyone.”

She said the Democratic party turns a blind eye to rioting.

“America isn’t perfect, but the principles we hold are perfect,” she said. “Even on our worst day, we are blessed to live in America. It’s time to keep that blessing alive for the next generation.”

She said Trump and the Republican party are committed to upholding this idea.

“In this election, we must choose the only candidate who has and will continue delivering on that vision,” Haley said. “President Trump and vice president Pence have my support, and America has our promise. We will build on the progress of our past and unlock the promise of our future.”

This story was written by Alex Garner. She can be reached at alexandra.garner@marquette.edu.