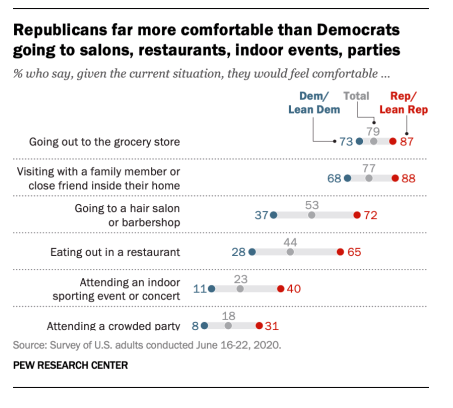 Despite over 181,000 deaths and eight months in a pandemic, some areas in the United States will never adhere to COVID-19 safety guidelines.

People refuse and protest wearing a mask and call the people who do “sheep.” Others go the opposite direction by calling people who oppose safety measurements “grandma killers.”

When it comes to understanding why the U.S. currently leads the world in coronavirus cases, it’s important to recognize the following: the country’s deep-rooted value of individualism and a heavily polarized political climate hinder the ability to take a united approach.

Additionally, those who identify as Republican or lean Republican are far more comfortable eating out a restaurants, attending crowded parties and going to a hair salons or barber shops than those identifying as Democrat or leaning Democrat during the pandemic. Thirty-six percent of people who are Republican or lean Republican are also more likely to prefer elementary instruction to be in-person, 5 days a week while only 6% of people who are Democrat or lean Democrat believe elementary instruction should be in-person.

In rural or traditionally conservative areas, individualism — an ideology that emphasizes the worth of the individual over the collective — reigns supreme. While in many cases this ideology is admirable, individualism can become rugged, creating an “everyone fend for themselves” type of attitude. For those prioritizing individualism, adhering to mask mandates or limiting social gatherings is just another bureaucratic overreach.

It is not to say that only rural or conservative areas experience increases in COVID-19 cases due to refusal to adhere to coronavirus guidelines. Cities often have increased numbers of cases due to being densely populated. However, traditionally conservative states like Georgia and Texas were much quicker to reopen and relax coronavirus guidelines. This suggests that individualism and freedom are more ingrained into their states’ cultures.

Until the country manages to solve these problems, the U.S. will continue monopolizing the global coronavirus charts. According to Worldometer, the U.S. leads with the most coronavirus cases, passing Brazil by more than 2 million.

Regardless of concerns for more COVID-19 cases and deaths, Americans continue to flock to crowded beaches, congregate in parties and mingle maskless in bars.

Similar to these states, many Chicagoland residents also flocked to small businesses and resort towns like Lake Geneva,Wisconsin to regain a sense of pre-pandemic normalcy this summer.

Northern Wisconsin also attracted tourists, and is now experiencing rates of coronavirus cases equivalent to other counties in the state with about 14 new daily cases per 100,000 people.

While it is easy to immediately chastise people for reopening businesses, their economic concern is valid, as the federal government has thus far failed to properly mitigate the coronavirus.

According to the National Conference of State Legislatures, the U.S. unemployment rate was approximately 10% in July compared to about 3% in January and 15% in April. Restaurants and small businesses are still getting hit hard, and many have been forced to shut their doors. In a hyper-capitalist society like the U.S. — with underwhelming social safety nets compared to many other developed countries — being out of work is a big deal.

The first stimulus check sent through the CARES Act was $1,200, which was unfortunately not received by all Americans. The second round of coronavirus relief — the Heroes Act— may not happen at all, as it is still sitting in the Senate after being passed in the House of Representatives May 15.

The United States’ financial support systems are meager compared to other countries with more socialist policies, leading to a necessity to remain open. The culture of work, little support systems and privatized health insurance all add to America’s unsavory parts individualism, the type that forces people to either “sink or swim.”

Fixing a culture of rugged individualism, notions of freedom and political divide, however, will be difficult as they are heavily ingrained in American culture and identity. These values have existed since the nation’s birth.

However, treating the coronavirus less of a partisan issue and discouraging excessive shaming or unwarranted disobedience may help ease tensions.

There is no chance at defeating the coronavirus unless the U.S. attempts to mend its deeper problems with citizen welfare and political divide.