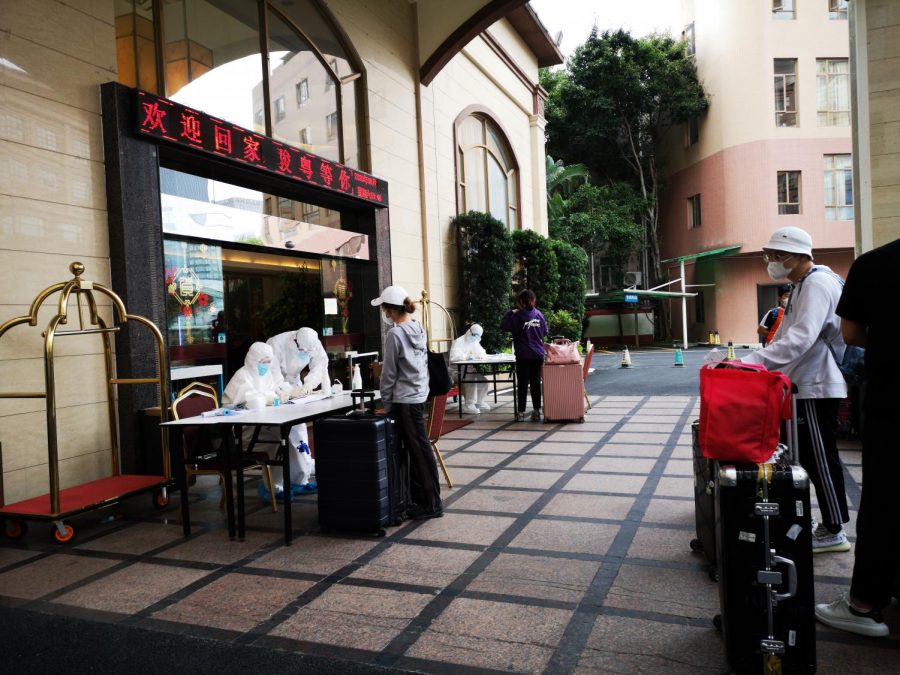 Henry Yang traveled to China and June and will take classes from home. Photo courtesy of Henry Yang

With issues such as travel bans due to the pandemic, international students who attend Marquette have expressed concerns about the upcoming semester.

Henry Yang, a senior in the College of Business Administration came to Marquette from China. He said that for international students, COVID-19 and the political situation are the “two biggest concerns, especially for Chinese students.”

Yang previously spoke to the Wire about a policy put in place by the Trump administration that would ban international college students from entering the U.S. if they were only taking online classes.

However, that policy was reversed on July 14. At the time, Yang also spoke about his concern with traveling between the U.S. and China during the pandemic because of interaction with others and the high cost of traveling.

“The international education community was very pleased and relieved that the guidance that was issued on July 7 was rescinded,” Ellen Blauw, associate director of the Office of International Education, said in an email. The guidance she referred to was the Trump Administration’s original ban on international students

“After the rescission, there again was confusion about appropriate policies for new and returning international students,” she said. “On July 24, further information was issued which provides guidance.”

Michelle Gomez, a sophomore in the College of Communication, is an international student from Guatemala.

“I really don’t even know how to explain how the ICE/SEVP visa policy news back in July made me feel,” Gomez said in an email. “I was shocked, confused, and my stress levels were just on another level.”

Gomez said she believed the policy affected her on a more personal level because it made her feel like she was not welcomed in the United States.

“There’s been a lot of uncertainty and confusion and even though Trump’s administration dropped the policies, to this day, many of my friends and I fear deportation,” she said in an email.

Yang also talked about his concern with the U.S. government placing travel restrictions on certain countries and said international students can’t enter the U.S. if they’re coming from a country on the travel ban list.

As of Aug. 18, the travel ban list due to the coronavirus includes China, Iran, European Schengen Area, United Kingdom, Republic of Ireland and Brazil. Yang said a student would have to stay in a country not on the travel ban list for 14 days before they would be allowed to enter the U.S. Yang was also worried about getting sick while in the U.S. and the possibility of not getting good medical care because of high costs and poor insurance.

Yang said he hopes the travel ban can be removed in the future. He is planning on staying in China for the fall semester and completing his classes online and will try to return to Marquette after the semester or in a few months.

Gomez said she believes travel bans will have a negative impact on not only her, but international students overall.

“I know of people, back home from Guatemala, Marquette, and other schools in the U.S. that are staying in their homes for several reasons. Either their countries are banned from entering the U.S. or the borders of their countries are closed,” Gomez said in an email. “But mainly because they are afraid that if they come back to school, they won’t be able to go back home if we go online during the middle of the semester.”

“I think that right now I am more concerned about the travel bans of my own country than the travel bans of the U.S. Guatemala still has its borders closed and if we go online within a few weeks, I don’t know if I will be able to fly back home,” Gomez said in an email.

Gomez said COVID-19 has affected her as an international student in many ways.

“My country, Guatemala, has had its borders closed since mid-March and I was afraid that I was not going to be able to fly back,” she said in an email. “I even got to the point of driving to Mexico and flying from there to the United States, because to this day, the airport back home is closed and there are no commercial flights yet.”

Gomez said she was able to get permission from the U.S. embassy and her country’s government to fly back in a United Airlines repatriation flight from Guatemala to Milwaukee. She returned to campus around Aug. 13.

Gomez said the whole time she was traveling back to Milwaukee she was afraid of getting sick.

“I was all over the place all day, Guatemala, Washington D.C., Chicago, Milwaukee, and I was paranoid,” she said in an email.

Gomez said while she was traveling she was wearing two facemasks, a plastic face shield, 20 pairs of hand gloves that she was constantly changing, glasses, plastic boots for her shoes, and had hand sanitizers and wipes.

She described her fears about going to the airport too — from touching her suitcases to using the bathroom.

Blauw said the Office of International Education has been in “continuous contact with students about many issues related to visas, travel, health conditions, self-quarantine, and online classes for the fall semester.”

“All of us in the Marquette community are concerned about the health and safety of our students,” she said. “I have particular concern for our international students who are far away from family and their home cultures. We are making every effort to ensure that students feel the support of the MU community during this time.”

For the fall, Blauw said international students who were at Marquette for the spring semester can choose online, hybrid or in person classes. She said that if the student is living in the U.S., they must enroll in at least some in-person or hybrid classes.

“I know that if we go online, I will not have a problem with it. I have learned throughout my life to take on the challenges that are presented to me and adapt if needed. It’s just that I would rather be on campus, going to class, going to work, and staying active, than staring at my computer screen for hours in my room,” Gomez said in an email.

This story was written by Matthew Choate. He can be reached at matthew.choate@marquette.edu.