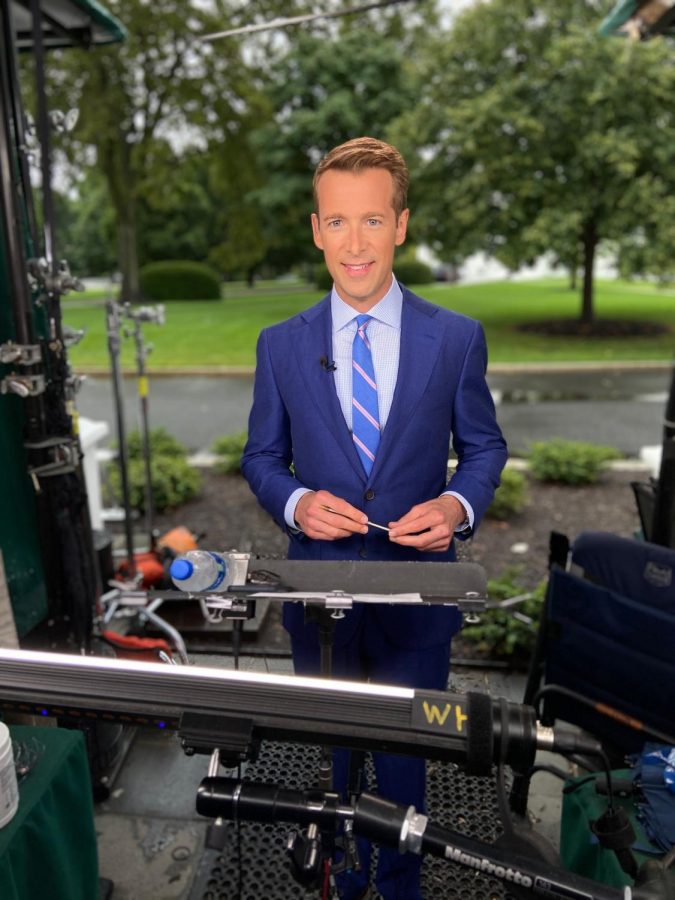 Tracy said each day as a correspondent is often very different from the rest, especially during the COVID-19 pandemic. He also said a lot has changed in the way he does his job due to COVID-19, one thing being his work location. He said workers at the White House are currently on a rotation where they physically go into the White House one week at a time and then work remotely for two weeks.

“When your job is to develop sources and be talking to people in administration, (working remotely) makes it very hard,” Tracy said. “You also can’t go meet people for coffee or a meal to kind of develop some of those relationships.”

However, when assigned to go into the White House, he starts his days early, arriving at the White House around 6:20 a.m. to prepare for his 7:00 a.m. hit for CBS This Morning.

“Then whatever the news of the day is — whatever you are trying to track down — you start emailing and making phone calls,” Tracy said. “You have White House officials who are out on the driveway of the White House after they do their T.V. hits, and you run up to them and ask the questions. If they don’t stop, you shout questions and see if they will respond in some fashion.”

He said they operate inside a very small booth inside the White House.

“It’s not nearly as glamorous as you would think it is,” Tracy said. “Even in these briefings with the president, you’re sitting there with a mask on and sometimes he can hear you and sometimes he can’t. It’s definitely changed a lot of things in terms of the daily experience of covering the White House.”

After that, Tracy said he works on updates for CBS News’ streaming platform, CBSN.

He said President Donald Trump is now doing a lot of daily news briefings too, so he spends a lot of his time crafting questions.

“(Crafting questions) is always a fun kind of dance because you need to have at least ten questions,” Tracy said. “You never know when he will call on you, and if your questions have already been asked, you want to make sure you have backups.”

He said covering Trump is often very unpredictable, but exciting.

“If you’re in news, what you want to do is have news, and he is someone who reliably provides news everyday, oftentimes many times a day,” Tracy said. “You are constantly having to keep your ear on whatever he is saying at any given time. While it can be exhausting, it’s also what makes it fascinating and interesting.”

Tracy shared an example of covering breaking news on Trump from mid-August.

“I was doing my live shot out from the north lawn of the White House, and our story was about how (Trump) tweeted out today that people should not buy Goodyear tires because he is upset that Goodyear doesn’t let people wear ‘make America great again’ hats inside their plant,” Tracy said.

He added that Goodyear also does not let workers wear Joe Biden hats for political reasons.

“But then the president was giving a news conference before we went on the air and he started talking about (a) conspiracy group so we had to add that into our tag,” Tracy said.

Tracy then concludes his day by preparing for the evening news.

“The days can be long, but honestly, they go by pretty quickly because there is just so much going on,” Tracy said. “It’s a mental challenge, but it’s fun.”

On days when he does not go into the White House, Tracy said he works remotely from home. Most recently, Tracy has been covering the Democratic National Convention through his computer and television screen.

As a former Marquette alum, Tracy said Marquette prepared him for a career in journalism in a lot of ways.

As a first-year student at Marquette, he said he already knew he wanted to go into television news.

In his first year, he lived in O’Donnell Hall, and right across the street from O’Donnell is the ABC-affiliated Milwaukee Channel 12, WISN.

“I remember walking over there the second semester of freshman year and I said ‘Can I have an internship?’ and they said ‘You’re a freshman. We don’t give internships to freshmen,'” Tracy said. “I just kept going back and finally one night they said fine, we’ll let you sit on the assignment desk and you can photocopy the newspaper and collect faxes.”

Tracy ended up staying at Channel 12 for three and a half years, where he eventually got a paid job as the producer of their investigative unit while he was still at Marquette.

After graduating in 1998 and taking various jobs around the midwest, including at Marquette and WCCO TV in Minneapolis, Tracy said he was hired by CBS in 2008.

As a correspondent for CBS, covering politics is still relatively new to him. Tracy said he has traveled to and reported in 18 countries and five continents so far, and has covered a wide range of stories.

“I was living and working in China and covering all of Asia so I was constantly traveling,” Tracy said. “I’m very grateful. (CBS) has taken me to a lot of interesting places everywhere, from North Korea to Cuba to Indonesia, New Zealand, all over Europe. It’s a great gig.”

Tracy said he is still not completely used to covering politics, as he has been covering so many various stories across the world. He said he loves the range of stories that he gets to cover and the experiences he gets to have.

Tracy mentioned one experience that continues to stand out to him in particular, where he spent 16 hours on a train each way to North Korea’s nuclear test site two years ago.

He recounted being among other journalists invited by North Korea to a location where the country was dismantling a nuclear weapons test site.

“Spending that amount of time on a train in North Korea with armed North Korean soldiers outside your cabin was a very unique experience,” Tracy said. “Those are moments where you kind of just pinch yourself, and you say ‘I never thought I’d visit North Korea,’ and before you know it, you’ve been there three times.”

For Tracy, being a correspondent for the White House was a “full circle moment” in his journalism career.

After being an intern at the White House in college, he said he aspired to be a White House correspondent one day, but his career took many different paths.

“I remember the first day walking down the driveway there. It was the first time I had been back to the White House in 22 years,” Tracy said. “It was a really cool moment to be there again.”