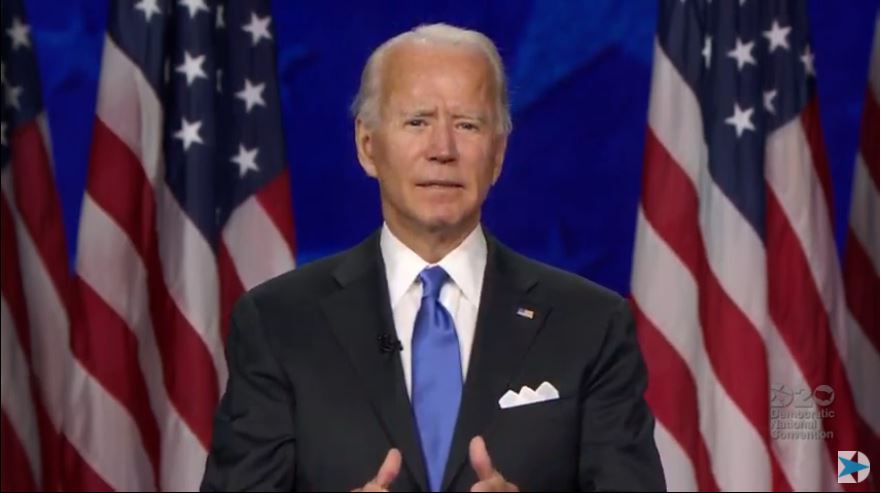 After months of campaigning, debates and primaries, former Vice President Joe Biden accepted his presidential nomination for the Democratic Party on the final day of the Democratic National Convention.

Biden secured 2,687 delegates from all 50 states and seven U.S. territories during the course of the primaries.

After being introduced by his children Ashley, Hunter with a recording of his son Beau from the 2008 convention, Biden greeted the nation by focusing on hope during the “dark times” the nation currently faces.

“United we can, and will, overcome this season of darkness in America,” Biden said. “We’ll choose hope over fear, facts over fiction, fairness over privilege.”

Shortly after his introduction, Biden officially accepted his nomination as the Democratic presidential nominee.

Biden said this election is not just about winning votes, but winning “the heart and soul of America.”

The democratic presidential nominee called attention to the four crises that currently plague the nation: the coronavirus pandemic, the worst economic crisis since the Great Depression, calls for racial justice and the future of a potential climate crisis.

“History has delivered us to one of the most difficult moments America has ever faced,” Biden said. “America is at an inflection point. A real time of peril, but of extraordinary possibilities.”

Biden criticized President Donald Trump’s mishandling of the coronavirus pandemic, which has taken the lives of more than 170,000 Americans, calling America’s response “the worst of any nation on earth.”

He also overlaid his initial first steps in combating the pandemic in the United States should he be elected. Biden said he would deploy “rapid tests” with results that would be ready immediately, providing American-made medical supplies and protective equipment throughout the country, allowing experts to speak candidly with the public and implement a nationwide mask mandate.

“The tragedy of where we are today doesn’t have to be this bad,” Biden said. “I will do what we should have done from the very beginning.”

Following his plan to combat the COVID-19 pandemic within the United States, Biden then introduced his plan to rebuild the economy.

Biden said his economic plan would include the building of new infrastructures such as roads, highways and airports as a “new foundation for economic growth.” Biden said these projects would introduce five million new jobs to the American economy.

His economic plan also touched on a health care system based around the Affordable Care Act, which was an Obama-era health care reformation plan and educational system where, “cost doesn’t prevent young people from going to college, and student debt that doesn’t crush them when they get out.”

Biden then shifted his attention toward climate change, an issue that has taken front in his presidential campaign. He said this is an opportunity for America to lead the world in clean energy solutions while creating millions of new jobs.

Biden also pledged to protect Social Security and Medicare, which are government-based benefits that over 65 million Americans receive.

“If I’m your president, I’m  going to protect Social Security and Medicare, you have my word,” said Biden.

He said that this generation will be the one that “wipes out the stain of racism.” Biden cited the three year anniversary of the Charlottesville protests, and the recent murder of George Floyd as inspiration for change.

Biden quoted former Georgia Representative John Lewis, saying that America is ready to “lay down the burdens of hate at last.”

“In times as challenging as these, I believe there is only one way forward: as a United America,” Biden said.