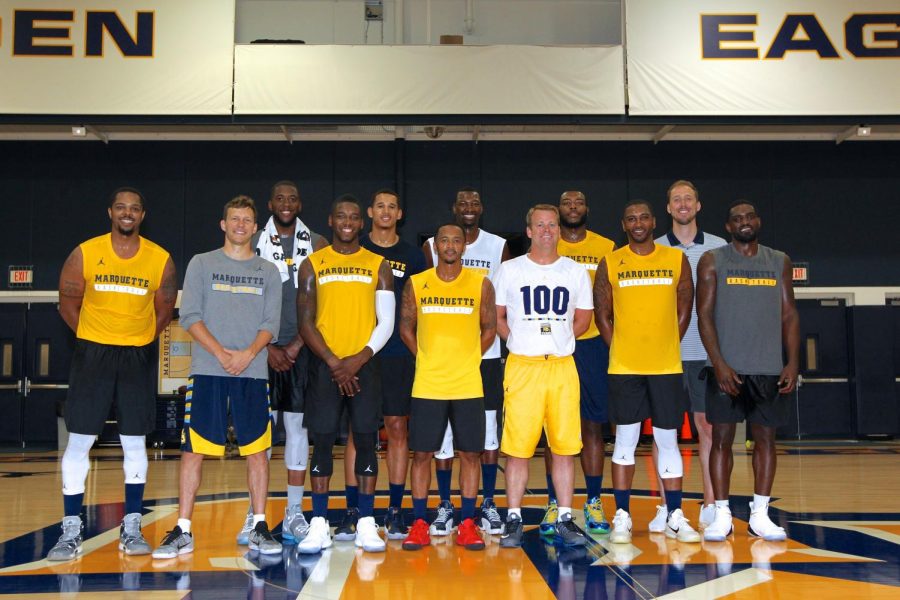 Joe Chapman (far left) and Travis Diener (to the right of Chapman) pose with the 2017 TBT team.

Then in 2019, as the No. 1 seed in the Wichita Regional, the Golden Eagles made their debut in the championship game. This time, the team lost 66-60 to Carmen’s Crew, the Ohio State University alumni team in a thrilling Elam Ending finish.

“We all knew that we should’ve won that game last year and we were that close to winning it,” Golden Eagles head coach Joe Chapman said. “Everyone was real motivated to make a point that it was a fluke last year and we wanted to put a statement to the TBT and to everyone else who was watching that we’re here to stay and we’re not just a team that’s going to continue to lose.”

But in March when everything started shutting down and the NBA suspended its season, Chapman feared TBT would also be canceled.

“Even a day before, two days before we left for Columbus, collectively we thought, ‘This isn’t going to happen,'” former Marquette basketball guard Travis Diener said.

Instead, TBT was the first event to restart using “the bubble” format, which placed 24 teams in Columbus, Ohio for two weeks to complete a tournament.

“They did their job keeping everyone safe and keeping everyone inside so we could play,” Chapman said. “Yes it’s a sacrifice, but at the same time, there was an obligation and responsibility to bring sports back professionally.”

The TBT was also used as an escape for sports fans who were not able to watch basketball for the past five months.

“Watching that TBT game was an excitement that we haven’t had for a very long time and I just think 2020 has been a crazy amount of emotions,” Marquette women’s basketball forward Chloe Marotta said. “I know I woke up in the morning and I looked at my brother and I was like like, ‘Oh my God, we have a basketball game tonight.’ It was just like, you’re back into it.”

Amidst the COVID-19 pandemic in 2020, the No. 4 Golden Eagles found their redemption, becoming TBT champions with a 78-73 win over Sideline Cancer to take home the $1 million cash prize.

“Every year you just get a step closer,” Chapman said. “We knew we had the roster to compete to win every year because we always made it to the elite quarterfinals.”

Diener said he did not even register that there were no fans cheering at the end.

“When we won that game and we were celebrating, we didn’t know that there was nobody in there because we were just running around, yelling and screaming,” Diener said. “It became a little more normal as the tournament went on.”

Even though it was Elam Ending for the second year in a row — where a target score is set rather than letting the game clock run down — Chapman expected it.

“We went through it last year so everyone was kind of poised when it happened this year. We kind of knew that might be the case,” Chapman said. “When things got tough this year, no one panicked. Everyone just stayed the course.”

Both Chapman and Diener said the Elam Ending makes for a more exciting game for fans and players.

“Every game ends in a game-winning shot,” Diener said. “If you’re losing, even by a large amount, you can always come back. In a regular game, if you’re down 10 to 12 points with three minutes left, first off that game is probably over, and second off, the game takes forever to end because there’s so much fouling. With this ending, it creates a lot of drama.”

Chapman said this championship can be used as a recruiting tool because the team “showed a product out there what Marquette basketball is about — toughness and gritty guys (that) play hard and play together.”

“It’s so cool because you have guys from many different eras of Marquette basketball coming together, putting the Golden Eagles on their chest and representing our basketball family in the best possible way,” current Marquette head coach Steve Wojciechowski said. “Obviously the championship was incredible, but those guys represented the university and our basketball program in a first-class manner all the way around.”

Wojciechowski said even though he can only speak for himself, he said it was exciting to have live basketball on his TV screen again.

“It made it even better that I was watching guys that have represented and worn the jersey and do it in such a fine fashion,” Wojciechowski said.

Ultimately, the TBT gave professional and collegiate sports a model to follow in order to make a return back to normalcy.

“With the TBT and with the NBA restarting, it gives us as the college basketball community a chance to witness and understand what works, how it works and then use that information to decide if it can be executed at the college level,” Wojciechowski said. “The NBA and TBT is much different than coaching 18 to 22-year-olds who aren’t professionals, but it does give us a window into strategies that we may be able to use to provide an atmosphere where first of all it’s safe and healthy for guys to compete, and then execute a college basketball season in some shape, form or fashion.”

Not only did the TBT maintain safety, it also created a connection between the Golden Eagles.

“We have a core group that’s always coming back and committed,” Chapman said. “Now we’re like family. … We’ll go to dinner, we’ll hang out in each other’s rooms, we’ll play video games, drink beers. It created a bond inside of that bubble that we’ll always have now.”

The alumni team’s roster has had some changes over the years, but Chapman and Diener have remained as two constants. Even though Mo Charlo, Elgin Cook and Jarvis Williams didn’t go to Marquette, Diener said they’re honorary Marquette alums because of this tournament.

After winning the title in 2020, the team has a lot more confidence for next year’s TBT.

“We’re setting ourselves up to make a good run at least the next two or three years now that we’ve got the monkey off our back a little bit,” Chapman said. “We understand what it takes and how hard it is to win every year. We’re prepared for it and we’re going to try and make our run now.”