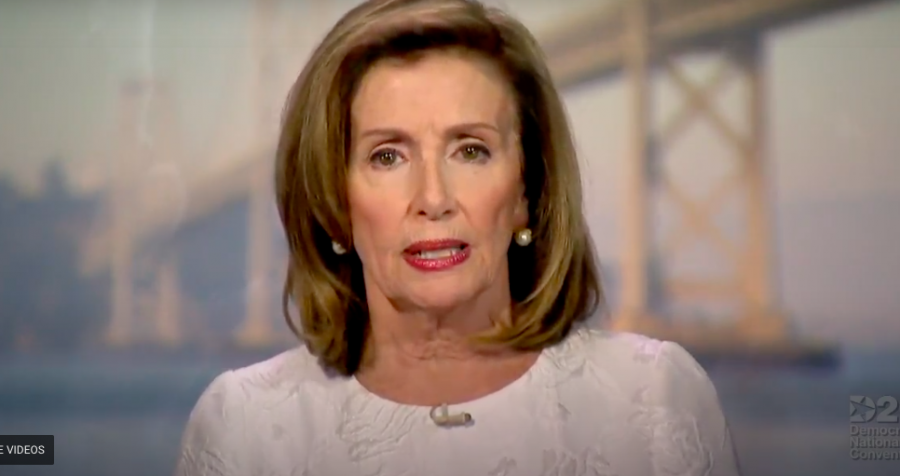 Speaker of the House Nancy Pelosi shares Joe Biden should be the next president on the third night of the DNC. Screenshot from DNC Livestream.

On behalf of House Democrats, Speaker of the House Nancy Pelosi greeted the audience of the Democratic National Convention on the third night, citing the house as the most diverse majority in history, with more than 60% comprised of women, people of color and members of the LGBTQ community.

“Our diversity is our strength,” Pelosi said. “Our unity is our power.”

She added that, as the mark  of the centennial of women gaining the right to vote, it occurs with 105 women in the house, 90 of whom are Democrats.

“To win the vote, women marched and fought and never gave in,” Pelosi said. “We stand on their shoulders, charged with carrying forward the unfinished work of our nation, advanced by heroes from Seneca Falls to Selma, to Stonewall.”

“In that spirit,” Pelosi said. “We come together now, not to decry the darkness, but to light a way forward for our country. That is the guiding purpose of House Democrats, fighting for the people.”

Pelosi said the nation faces the worst health and economic catastrophe in history, with more than five million Americans infected by COVID-19 and more than 170,000 deaths to the virus.

“As the Speaker of the house, I’ve seen firsthand Donald Trump’s disrespect for facts, for working families and for women in particular written into his policies toward our health and our rights, not just his conduct.” Pelosi said. “We know what he doesn’t: that when women succeed, America succeeds.”

“His heart is full of love for America and he will rid the country of Trump’s heartless disregard for America’s goodness,” Pelosi said. “Joe Biden’s faith in God gives him the courage to lead. Joe Biden’s love gives him the strength to persevere. Joe Biden is the president we need right now.”

Pelosi said Biden has never forgotten who he his fighting for. She also said Kamala Harris is the vice president the country needs.

“(She is) committed to our Constitution, brilliant in defending it, and a witness to the women of this nation that our voices will be heard,” Pelosi said.

At the end of her speech, Pelosi mentioned the goals of the future.

“Our mission is to fight for a future equal to the ideals of our founders, our hopes for our children and the sacrifices of our veterans, our brave men and women in uniform, and their families,” she said. “We will increase our majority in the house, we will win a Democratic majority in the Senate. We’re going to elect Kamala Harris vice president, and we will elect Joe Biden president of the United States of America.”