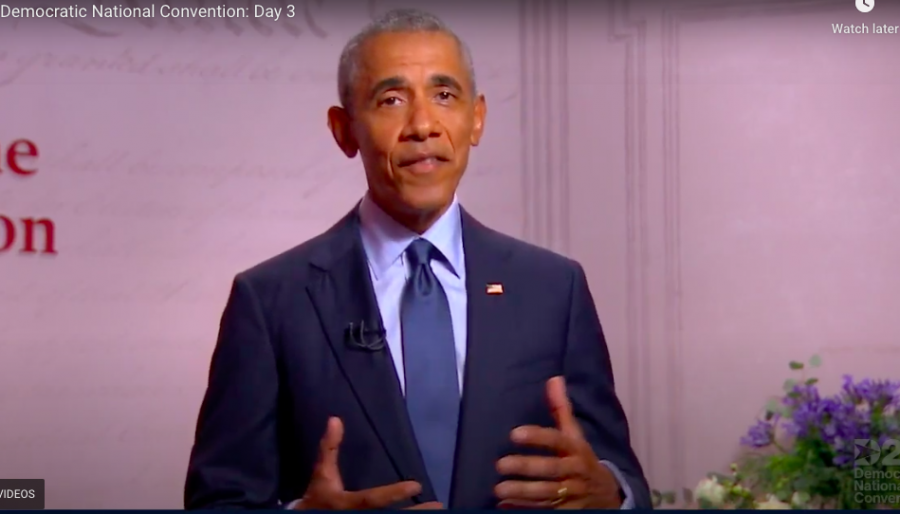 Former President Barack Obama talked about the importance of democracy on the third night of the DNC. Screenshot from the DNC livestream.

Beginning his speech by talking about the imperfections of the United States Constitution, former President Barack Obama spoke on the third night of the Democratic National Convention in Philadelphia, where the constitution was signed.

“It wasn’t a perfect document. It allowed for the inhumanity of slavery and failed to guarantee women – and even men who didn’t own property – the right to participate in the political process,” Obama said. “But embedded in this document was a North Star that would guide future generations; a system of representative government – a democracy – through which we could better realize our highest ideals.”

He said that through the civil war and bitter struggled, the constitution improved to include the voices of those who’d once been left out.

“Gradually, we made this country more just, more equal, and more free,” he said.

Obama said that because the one constitutional office that is elected by the American people is the presidency, at a minimum, Americans should expect the president to feel a sense of responsibility and care for the safety and well-being of all 330 million of us.

“We should expect that regardless of ego, ambition or political beliefs, the president will preserve, protect and defend the freedoms and ideals that so many Americans marched for and went to jail for, fought for and died for,” Obama said.

Obama said he did not expect that his successor would embrace his vision or aim to continue his policies, but that he said he did hope Trump would show some interest in taking the presidency seriously.

“I (hoped) that he might come to feel the weight of the office and discover some reverence for the democracy that had been placed in his care,” he said.

Obama said that despite his hope, Trump never did take the presidency seriously.

He said Trump’s failures as the president have been severe.

“One hundred and seventy thousand Americans (are) dead. Millions of jobs (are) gone. Our worst impulses (have been) unleashed, our proud reputation around the world badly diminished, and our democratic institutions threatened like never before,” he said.

Obama said he understands that in this polarizing time, Americans are contemplating who to vote for or whether to vote at all. But he asked for voters to believe in Joe Biden and Kamala Harris’ ability to lead the United States.

“Twelve years ago, when I began my search for a vice president, I didn’t know I’d end up finding a brother. Joe and I came from different places and different generations. But what I quickly came to admire about him is his resilience, born of too much struggle; his empathy, born of too much grief,” Obama said. “Joe’s a man who learned early on to treat every person he meets with respect and dignity, living by the words his parents taught him: ‘No one’s better than you, but you’re better than nobody.'”

Obama said that Biden is empathetic and believes that everyone counts. When Biden talks to someone, Obama said, Biden listens with his own background.

“When he talks with someone who’s lost her job, Joe remembers the night his father sat him down to say that he’d lost his. When Joe listens to a parent who’s trying to hold it all together right now, he does it as the single dad who took the train back to Wilmington each and every night so he could tuck his kids into bed. When he meets with military families who’ve lost their hero, he does it as a kindred spirit; the parent of an American soldier; somebody whose faith has endured the hardest loss there is.”

Obama said that during his presidency, Biden made him a better president; he has the character and necessary experience to make the country better.

He also said that Harris is more than prepared for the job of vice president.

“(She is) someone who knows what it’s like to overcome barriers and who’s made a career fighting to help others live out their own American dream.”

Obama said that with concrete policies and their previous experience, Biden and Harris will be able to get the pandemic under control, expand health care to more Americans and rescue the economy.

“Joe and Kamala will restore our standing in the world — and as we’ve learned from this pandemic, that matters. Joe knows the world, and the world knows him. He knows that our true strength comes from setting an example the world wants to follow. A nation that stands with democracy, not dictators. A nation that can inspire and mobilize others to overcome threats like climate change, terrorism, poverty, and disease.”

Above all else, Obama said he knows that both Biden and Harris care about every American and care deeply about this country.

While he is calling upon Americans to vote for Biden and Harris, Obama points out that no single person can fix the country alone.

“Democracy was never meant to be transactional — you give me your vote; I make everything better. So I am also asking you to believe in your own ability — to embrace your own responsibility as citizens — to make sure that the basic tenets of our democracy endure. Because that’s what (is) at stake right now. Our democracy.”

He empathized with Americans feeling frustrated or jaded by our government while still stressing the importance of voting in this election. Therefore, he said he calls upon Americans to make a plan for how they are going to get involved and vote.

“Do it as early as you can and tell your family and friends how they can vote too. Do what Americans have done for over two centuries when faced with even tougher times than this — all those quiet heroes who found the courage to keep marching, keep pushing in the face of hardship and injustice.”

Obama also commended young Americans for their resiliency and dedication to fighting for justice. He said that while previous generations had to be persuaded that every person has equal worth, young people hold equality as a conviction.

“You can give our democracy new meaning. You can take it to a better place. You’re the missing ingredient – the ones who will decide whether or not America becomes the country that fully lives up to its creed.”

Obama said that while the work to create a better America will continue long after the 2020 presidential election, any chance of success is dependent on the election’s outcome.

“This administration has shown it will tear our democracy down if that’s what it takes to win. So we have to get busy building it up — by pouring all our effort into these 76 days, and by voting like never before — for Joe and Kamala, and candidates up and down the ticket, so that we leave no doubt about what this country we love stands for — today and for all our days to come.”

This article was written by Alexandra Garner. She can be reached at alexandra.garner@marquette.edu.