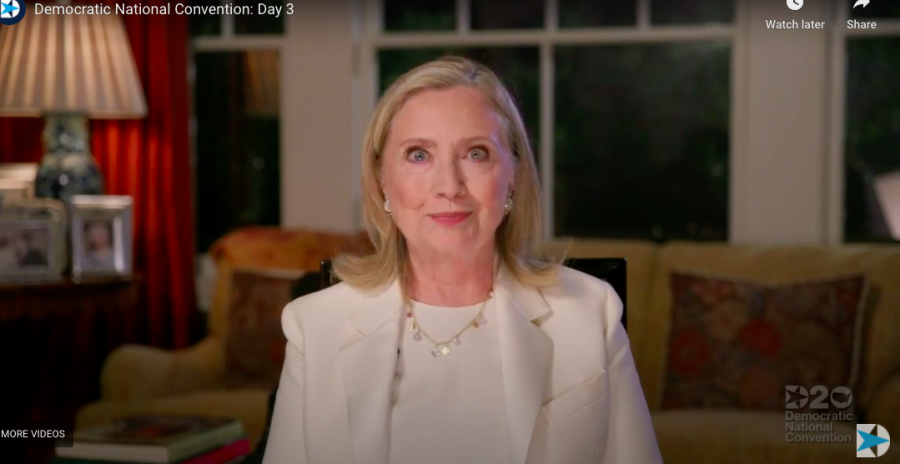 Hillary Clinton spoke on the importance of voting, especially to young voters. Screenshot from DNC livestream.

Former Secretary of State and 2016 Democratic presidential candidate Hillary Clinton focused her speech on the American public’s decision on who to vote for in the upcoming election during the third night of the Democratic National Convention.

“We need leaders equal to this moment of sacrifice and service,” Clinton said.

Those leaders, Clinton said, are Joe Biden and Kamala Harris.

In Clinton’s eyes, Trump has not acted as the president the country needs during the last four years — especially right now. Clinton called for the American public to join together to “pull our nation from the brink” and change the future for the better.

Clinton said to not just aim to get Trump out of the White House. She explained why the Biden and Harris ticket is the team needed now to create jobs, fight climate change, provide emergency relief and help small businesses and hardworking people survive during the pandemic.

She emphasized the obligation to vote by calling upon all the groups in need of help from parents struggling to educate their children during COVID-19 to essential health care workers, from DREAMers to Black lives. She said that the current White House is not aiding any of them, and Americans must vote for Biden, as he is the president who will protect their rights. A vote for Biden is not just a vote for the win of a single person, but for all Americans suffering right now, Clinton said.

“Don’t give up on America,” Clinton said, ending her speech with a call to young Americans. “This is our country’s story, breaking down barriers and expanding the circle of possibility.”

Clinton explained that Americans must be strong together to heal this country and redeem its promises.

“We need numbers so overwhelming Trump can’t sneak or steal his way to victory,” she said. “So come November … we will elect Joe Biden and Kamala Harris ­— together.”

This story was written by Aminah Beg. She can be reached at aminah.beg@marquette.edu.