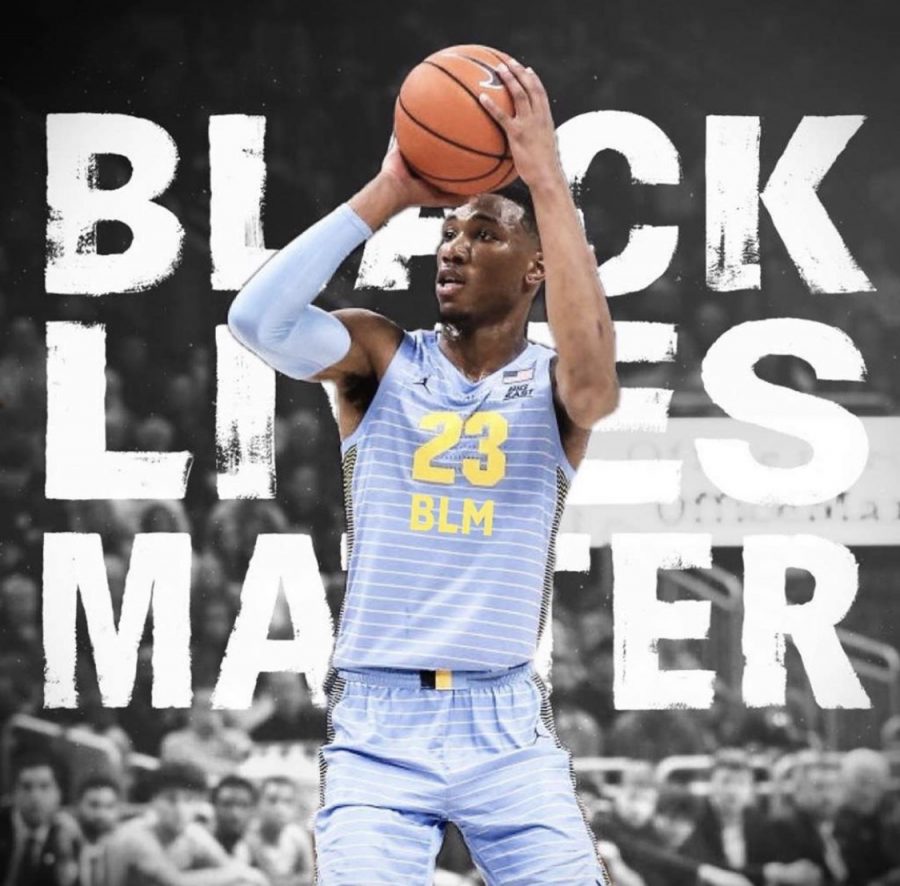 Jamal Cain posted this photo on his Instagram in support of BLM. (Photo courtesy of Jamal Cain.)

The BIG EAST announced in a statement Aug. 19 that it will be adding Black Lives Matter patches to all men’s and women’s basketball jerseys for the 2020-21 season.

The conference also officially supported the efforts of Coaches For Action, an organization consisting of 21 BIG EAST assistant coaches that aims to educate and bring awareness to social injustices. In addition to a scholarship fund and voting awareness, adding BLM patches to jerseys was one of three main initiatives of CFA.

Men’s basketball head coaches Justin Gainey and Dwayne Killings are both members of the organization. Killings is entering his third year with Marquette, while Gainey will enter his fourth.

“For all of us in the extended BIG EAST family, ‘Black Lives Matter’ is not a political organization or ideology, but a fact,” BIG EAST Commissioner Val Ackerman said in a statement. “For us, BLM means that the safety, dignity and well-being of all black people are non-negotiable rights and that intolerance and repression because of skin color cannot be tolerated in our world.”

The addition of the patches is just one of the many actions taken by the BIG EAST to raise awareness of social inequality. The conference recently announced a partnership with the Ross Initiative in Sports for Equality (RISE), a leading provider of educational programming that gives student athletes and administrators the chance to create a positive impact on matters of social justice.

BE the Change was also established, an advocacy platform that allows student athletes, coaches and administrators to “engage in a wide range of racial and social justice issues.”

Men’s basketball head coach Steve Wojciechowski showed his support for the BLM patches that will be added to uniforms this season in a statement on Twitter Aug. 19.

“I salute our conference and campus leaders for their decision to put Black Lives Matter patches on our uniforms this season,” Wojciechowski said in the statement. “I will do everything within my power as the leader of our program to pursue positive change.”

Wojciechowski also posted on Instagram about how proud he is of the leadership that Killings and Gainey have shown. He also stated that he is “honored to stand with players, coaches, administrators and those within our communities to continue the great work we are all trying to do.”

“Wearing the Black Lives Matter patch this season on our uniforms will be another step towards keeping social change at the forefront of our minds,” Duffy said in a statement on Twitter. “The work has just begun, but we look forward to wearing the BLM patch as we stand united with our black communities.”

Forward Jamal Cain and guard Koby McEwen have also been pleased by the decision, sharing their thoughts on Twitter.

While BIG EAST fall sports were recently cancelled, a decision has not yet been made regarding basketball. If the season starts as planned, the Golden Eagles will begin non-conference play in early November.