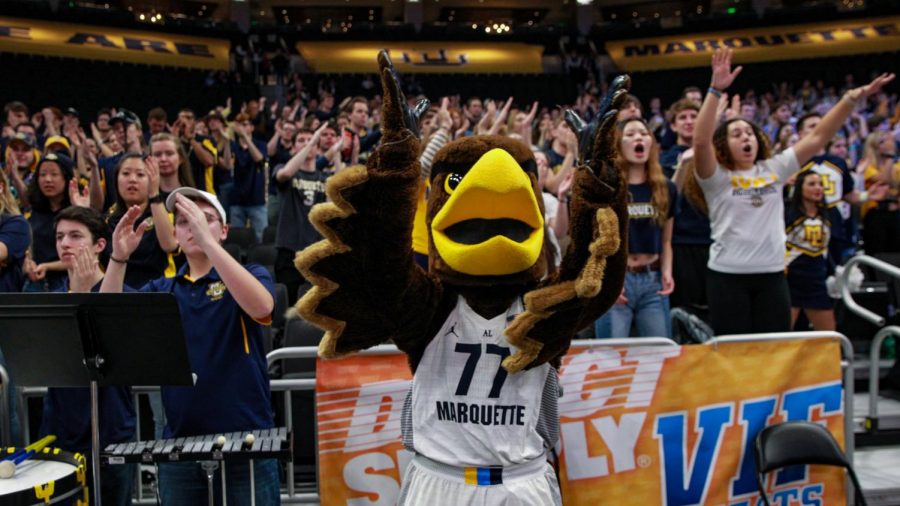 The Golden Eagle stands with the student section at the Marquette men's basketball game Dec. 4. (Photo courtesy of Marquette Athletics.)

On Monday Aug. 3, the Marquette Athletics Department announced they have finally given the Golden Eagle mascot a name of its own: Iggy.

Scott Kuykendall, Senior Associate Athletic Director for Communications, said the idea to name the mascot is not a new one.

“Naming the mascot is something we as a department had discussed previously,” Kuykendall said via email. “Following the redesign of the costume two years ago and the updating of the logo utilized with the Kid’s Club this summer, we thought it was a great time to do it.”

This name is in honor of St. Ignatius of Loyola, the founder of the Society of Jesus.

“The name Iggy had come up multiple times over the last few years and the department’s leadership felt like it was a great fit, tying in St. Ignatius and the university’s Jesuit tradition,” Kuykendall said.

Marquette Athletics said there will be no major changes to the mascot’s costume, except adding “Iggy” to the jersey that the mascot wears. They have also made an updated graphic of “Iggy” that will be used by the Marquette Spirit Shop and for marketing purposes. The athletic department has also set up a Twitter and Instagram account for Iggy, @MarquetteIggy. The accounts focus on Iggy’s journey around campus and various sporting events.

Kuykendall said he and the rest of the Marquette Athletic department hope naming the mascot will really help to connect fans not only to the athletic programs at Marquette, but to the university as a whole.