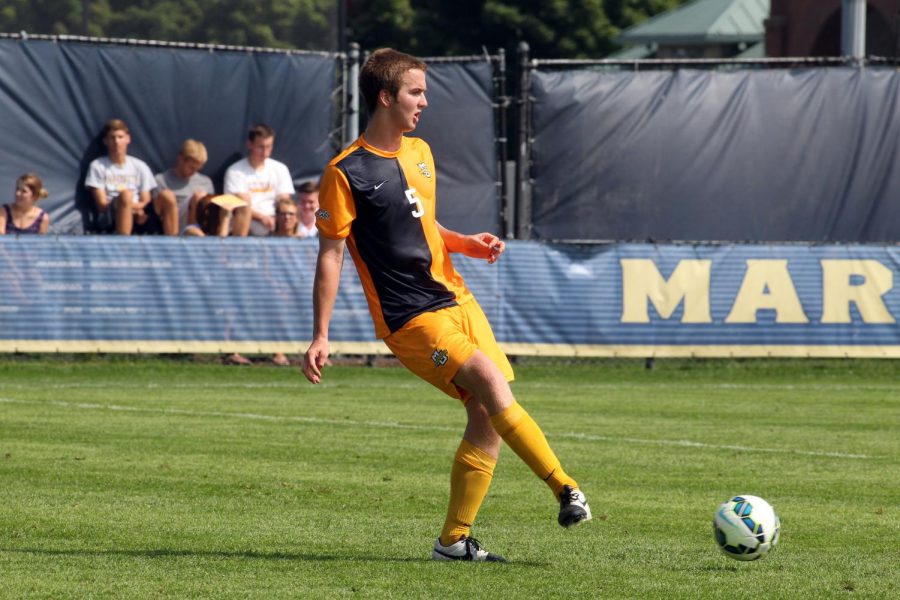 Danny Jarosz passes the ball in warmups of Marquette's exhibition game against Wright State in 2014. (Photo courtesy of Marquette Athletics.)

Marquette men’s soccer alumnus Danny Jarosz is back on the pitch for the Golden Eagles for the 2020 season. Only this time, he will be watching from the sidelines as MU’s new assistant coach.

“I couldn’t be more excited to have the opportunity to join the Marquette coaching staff,” Jarosz said in a statement. “I had such a fantastic experience as a student-athlete at MU, and my coaching staff and support staff played a big role in that. I’d like to thank Bill Scholl and Louis Bennett for the opportunity to come back to Marquette and help guide the development of our student-athletes.”

Jarosz’s playing career was cut short after suffering a career-ending injury during his junior year. However, the former defender would stay involved with the program in his senior season, serving as a student assistant for the men’s soccer team.

“The student-athlete experience as a Marquette men’s soccer player is truly one of a kind,” Jarosz said in the statement. “I’m looking forward to getting to work with the guys, fostering relations with the alumni and proudly representing the Blue & Gold wherever I go.”

After graduating from Marquette in 2018, Jarosz joined the coaching staff at Wisconsin Lutheran College. During two seasons with WLC, Jarosz helped the Warriors to a conference tournament berth and his team tied the school record for most wins in a NACC season.

Jarosz will now try to help turn around his former program, which finished 8-9-1 last season, the closest the program had come to a winning record since 2014 when the Golden Eagles went 8-6-4.

“We’re thrilled to have Danny back in the fold as a full-time assistant coach,” Coach Bennett said in a statement. “He was successful as a player here and added a ton of value as a student assistant coach during his final year at MU. I know he’s excited to hit the ground running and represent Marquette men’s soccer with pride.”