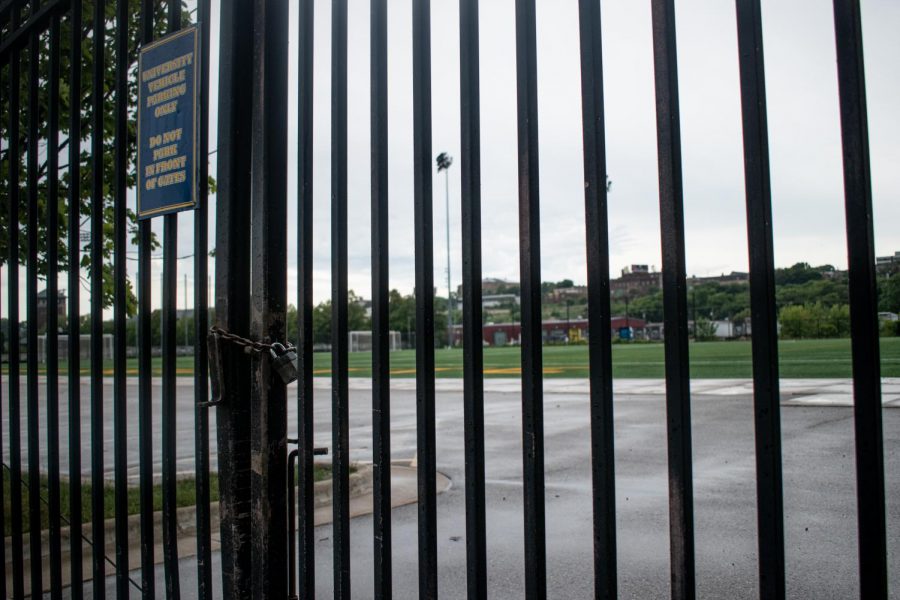 All athletic facilities, including Valley Fields, are closed until further notice due to the COVID-19 pandemic.

Amid the COVID-19 pandemic, Marquette athletic programs are searching for new and innovative ways to train and build team chemistry. This reigns especially true for incoming athletes, planning to spending their first year in their respective programs.

The BIG EAST announced July 16 that fall sports schedules will not include any non-conference opponents. Plans for winter and spring sports have not yet been made. Marquette Athletics is also delaying the “start of voluntary and NCAA-permissible organized workouts indefinitely.” All athletic facilities are closed for the time being.

The Golden Eagles will add over 80 incoming first-year and transfer athletes among their 14 men’s and women’s programs for the 2020-21 athletic season. With the pandemic altering Marquette athletics, these student-athletes have had to find alternative ways to train, as well as a way to become accustomed to their new team.

Alan Kim is an incoming first-year for the Marquette men’s soccer team. To become more comfortable with teammates and coaches, communication with his new team primarily happens over Zoom.

“All last month we had a Zoom call for each position,” Kim says. “I’m a winger, so I’d have Zoom calls with all the coaches and all the wingers that are going to Marquette.”

Team meetings once or twice a week also occur over Zoom. Coaches provide both incoming and current players with updates on the virus and how it could affect the season.

Kim says first-year men’s soccer players go back on Aug. 10, get tested, and will be eligible to start practicing on Aug. 12 if they do not test positive.

As for training, the Cedar Rapids, Iowa native completes workouts provided by the Marquette soccer trainer. Despite the unusual circumstances, Kim says he feels ready for when he gets to campus and knows what to do once he arrives at Marquette.

Forward Cristian Gennaro will also be entering the men’s soccer program after spending two seasons at Ottawa University in Arizona. Gennaro currently lives in Arizona and has decided to make a drive to campus that will take him over 20 hours due to the current travel conditions.

“I already plan to drive there in order to not get on any planes,” Gennaro says. “I think it will be the best for me.”

Gennaro says coaches are putting health above everything else and making sure that everyone is safe. Players will practice in small groups to start. The hopes are that they will then be able to work in a larger, team setting.

For the new additions on the men’s soccer team, online communication has been the primary source of interaction and team bonding, so these small groups will be the first chance to build team chemistry in-person.

Without access to their new teammates, Marquette’s newest additions have often found ways to train on their own at home.

“Justin Lewis, he’s hit us up, and he just got done running hills in Baltimore, but then he’s going across town to a gym to go work out,” Killings says. “Osa (Ighodaro), he has a facility he can go to where he can lift weights and play. Dawson (Garcia), sometimes he’s outside at a park and other times he’s in a gym.”

Due to the pandemic, changes in recruiting have also needed to be made. Having conversations over the phone and on Zoom have become a common occurrence to build strong relationships with recruits. Programs, such as the men’s basketball team, utilize virtual tours of campus to give these future student-athletes a feel for the Marquette community. Coaches are also trying to allow players to get the feeling of what it is like at a game.

“We’re trying to be really intentional about focusing on building our relationships with our recruits and really get to know them on a different level,” Killings says. “I do think that this pause in the world gives us all an opportunity to build relationships, dig deeper, have longer conversations, and although we’re not face to face, it’s a different conversation doing it on Zoom versus doing it over the phone.”

Killings says these types of calls can be an advantage in some respects if one is good at building relationships and is able to have the right dialogue.

While some NCAA conferences have cancelled fall sports for the 2020 season, the BIG EAST still plans to have a fall season with the new regulations in place. The NCAA is advising athletes to maintain a social distance of six feet, use hand sanitizers regularly, avoid touching of the face, and to sanitize all equipment before and after use.

As new athletes make their way to the Marquette campus in just a few weeks, they will have their first chance to meet their new teammates in a personal setting. Health and safety will remain as the top priority to ensure that these incoming first-year and transfer athletes have a smooth start to their careers with the Golden Eagles.