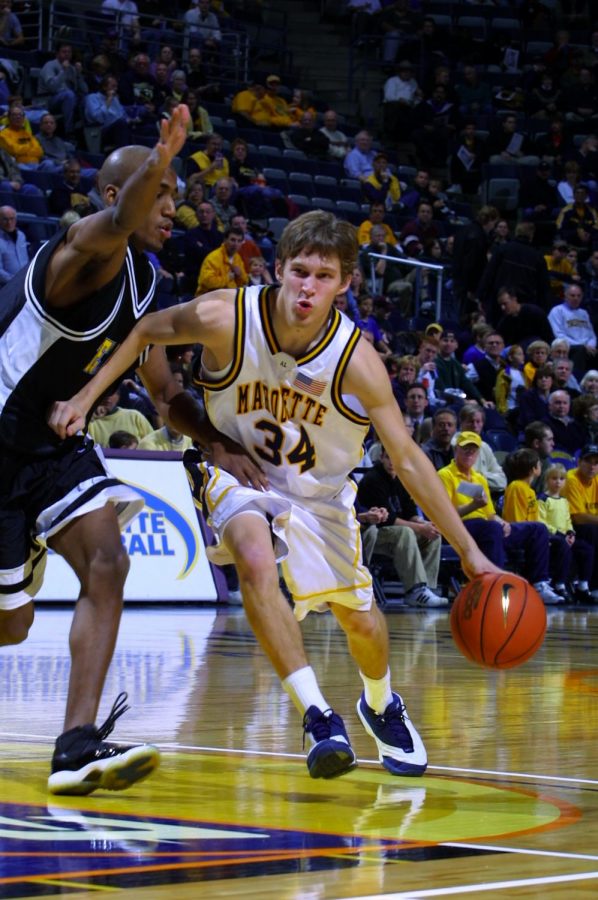 Travis Diener dribbles the ball into the lane. Diener played for Marquette from 2001 to 2005. (Photo courtesy of Marquette Athletics)

The Golden Eagles took home the $1 million cash prize after earning a 78-73 win against Sideline Cancer in the final game of The Basketball Tournament.

It was a redemption victory for Marquette after losing in last year’s championship to Carmen’s Crew, a team of Ohio State alumni.

Jamil Wilson led the way with 16 points,  Dwight Buycks, Darius Johnson-Odom, and Elgin Cook all added 15 points for the Golden Eagles. Johnson-Odom was also named MVP of the tournament. The former first-team All-BIG EAST selection averaged 16.8 points per game and shot the ball at 56.8 percent.

Marquette continued their impressive 3-point shooting, going 10-for-16 from behind the arc. The Golden Eagles finished the TBT with the fourth highest three-point percentage among the 24 teams.

Sideline Cancer was carried by Maurice Creek and Jamel Artis. Creek had 20 points and four rebounds, while Artis finished with 17 points, six rebounds, and two assists. The two shot a combined 15-for-26. Remy Abel also added 14 points, three rebounds, and three assists off the bench.

It was a quiet night for Marcus Keene, who entered the championship as Sideline Cancer’s leading scorer. The Youngstown State and Central Michigan alum was averaging 20 points per game and was coming off a 22-point performance in the semifinal upsetting No. 2 Overseas Elite.

Sideline Cancer had commonly forced upsets, defeating the favorite in all four of their previous games. They held a one-point lead heading into halftime after Creek threw an inbound pass off the back of Jamil Wilson and converted a layup at the buzzer.

What a heads up play from @Mo_Creek 👏👏@SidelineTBT takes the lead at the half! pic.twitter.com/QektVFtEhi

The second half remained close, and both teams went into the Elam Ending tied at 70. The first team to reach 78 points would take home the money.

Wilson would score the first points of the Elam Ending down in the paint, giving Marquette the slight advantage. After Keene converted on a 3-point jump shot to put Sideline Cancer ahead 73-72, the Golden Eagles would go on a 6-0 run to close the game.

A corner three from Travis Diener was the final basket to seal the deal. Diener was not initially signed up to participate this year, but head coach Joe Chapman had added him to the roster before the start of the tournament.

Chapman and all 11 players on the roster will receive a share of at least $90,000. General manager Daniel Fitzgerald will also receive a winning share of $80,000.