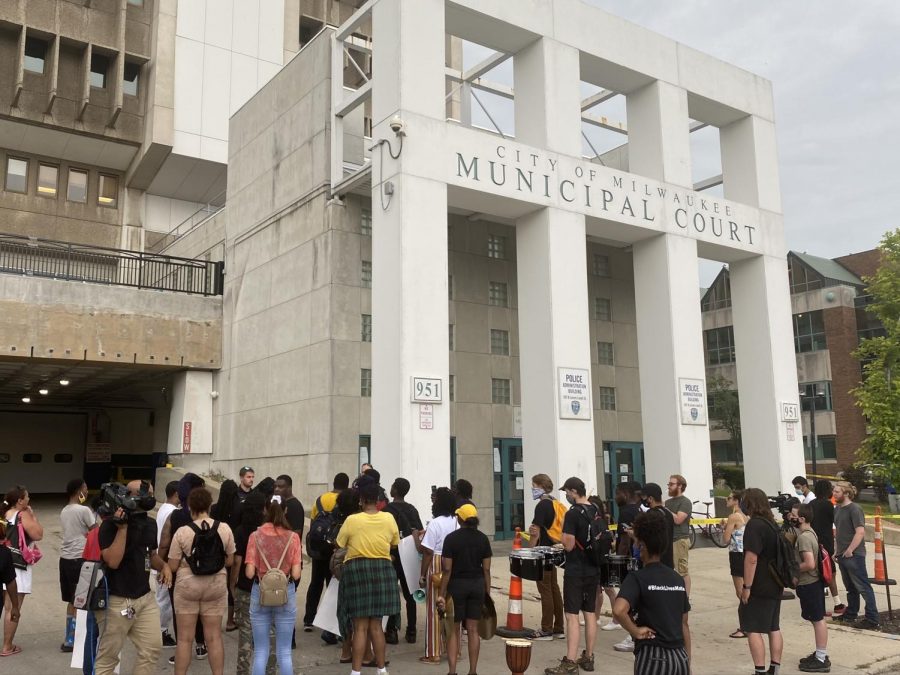 Black Student Council held a march June 29 in support of the Black Lives Matter movement, beginning at Washington Park and extending to the Milwaukee Police Station District One, a distance of approximately three miles.

Since the deaths of George Floyd and Breonna Taylor at the hands of police officers, as well as the racially-motivated murder of Ahmaud Arbery, protests and marches have broken out in cities across the United States this summer, with protestors demanding racial justice and police reform.

Aleeya Conway, a senior in the College of Health Sciences and a member of Black Student Council, said Black Student Council had been planning and preparing for their own march for about three weeks. Conway helped prepare for the march by contacting alumni, including some from the Marquette Black Alumni Association, to request donations for supplies and spreading the word on social media.

The roughly 25 marchers carried signs, megaphones, drums and hand cymbals to make their presence known while they walked through the street. As the march travelled through streets, stopping traffic, some people passing by on foot and in cars joined in. Those walking and riding by in vehicles showed their support for the marchers with fists in the air, honking their horns and clapping.

Conway said that some members of Black Student Council were initially concerned about how many participants they could gather as they planned the march.

“I think that’s something that we were worried about, but we learned that even if (it’s just) one of us, two of us, three of us, 10 of us, or 15 of us, that our voices can still be pretty loud,” Conway said.

The group left from Washington Park at 2 p.m. and arrived at the police station around 3:30 p.m.

Outside the police station, other community members were gathered, addressing the police about Milwaukee community activist Vaun Mayes who had been arrested earlier that day. Black Student Council’s march joined the crowd in front of the station and addressed the police officers standing outside.

“The goal of the march was to make sure logical demands were heard by police and to let the city hear us,” Black Student Council members said in an emailed statement.

The statement said that Black Student Council’s demands for the city of Milwaukee include defunding the police and reallocating money to community groups that help mentally ill individuals. Members of Black Student Council spoke to police officers about some of their demands outside the police station. While protestors shouted demands and questions of the police, three police officers standing out front asked protestors to remain behind a line of police tape.

After convening at the police station, the marchers returned another three miles back to Washington Park. Conway said the march ended around 6 p.m.

Conway said she thinks the past month’s resurgence of the Black Lives Matter movement has especially elevated the voices of younger generations. Amid the coronavirus pandemic, Conway said, protests against racial injustices are largely filled with younger individuals, since they are generally perceived at reduced risk for deadly complications of COVID-19 compared to older people.

Conway said Black Student Council would like to see police reform in Milwaukee and for the Milwaukee Police Department to be more vocal about the Black Lives Matter movement.

One person who joined the march was Anne Bartelt, an administrative assistant in the College of Arts & Sciences and 2007 Marquette alum.

Bartelt heard about the march from Black Student Council’s Facebook page. She said she has been attending other marches and protests around Milwaukee, but because she is medically at risk has only been attending one event every two weeks.

She said she thinks the current state of the world amid the coronavirus pandemic has brought new energy to the Black Lives Matter movement, particularly amid non-black populations.

“I actually think that the fact that we’re all in quarantine has made a lot of white people become aware of what’s going on, because they don’t have their regular daily lives to distract them,” Bartelt said.

Conway said conversations are key to enacting change in the Black Lives Matter movement for police reform and racial justice.

“I think that when you’re talking about situations like these, you always need to know that you’re talking to humans,” Conway said. “A lot of these issues, they start with conversations.”