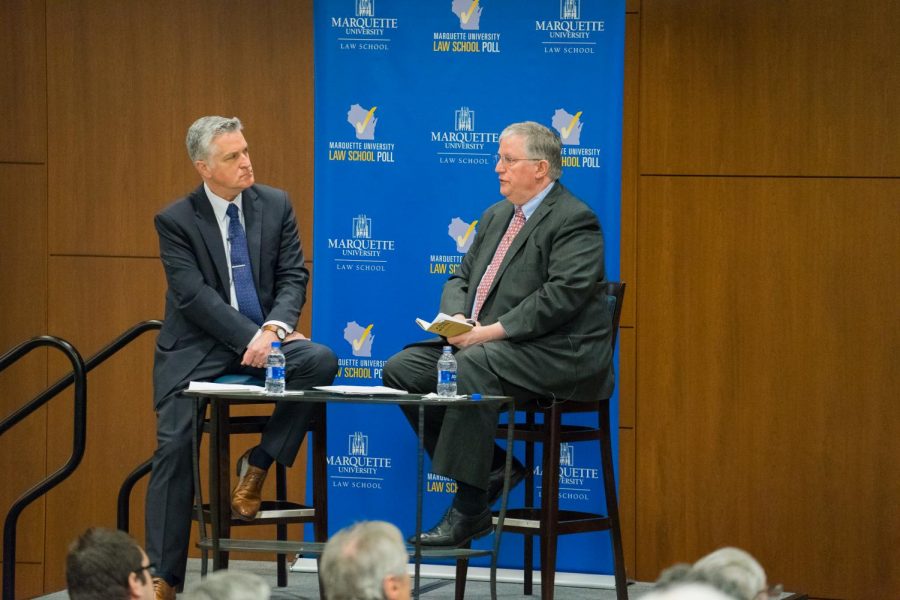 The most recent Marquette Law School Poll, released June 24, found that since January, support for Democratic presidential candidate Joe Biden among Wisconsin registered voters has fluctuated between 46 and 49%  while President and incumbent Donald Trump has, until now, stayed between 43 and 46%, according to the poll. The two were tied in February at 46%, and Trump has now reached his lowest support in Wisconsin this calendar year.

Support for Biden has increased to 49% from May’s finding of 46% while support for Trump has dropped to 41% from May’s 43%. In both polls, 10% of respondents said that they would either not vote or don’t know who they would vote for.

June’s poll was conducted between June 14 and 18 of this year and sampled 805 Wisconsin registered voters. The respondents were interviewed by landline or cell phone, and the poll results have a margin of error of +/- 4.3 percent.

Trump’s overall job approval has also fallen to the lowest this calendar year, with only 45% of respondents approving of his performance in office. According to the news release, Trump’s approval rating hasn’t been this low since August 2019.

In May, Trump was viewed favorably by 44% of respondents and unfavorably by 51%. The June results have shifted to 42% and 54%, respectively.

Wisconsin’s Safer at Home order was ended May 13 after the Wisconsin Supreme Court ruled that it must end immediately despite Governor Tony Evers’ extension of the order until May 26, according to the Milwaukee Journal Sentinel.

Perceived job loss has decreased from 15% of respondents in May to 13% in June. Respondents’ outlook for the economy over the next year has also improved since May.

According to the Federal Reserve Bank of St. Louis Economic Research database, which draws data from the U.S. Bureau of Labor Statistics, Wisconsin unemployment was 3.1% in March but rose to 13.6% in April. It has now dropped slightly to 12%.