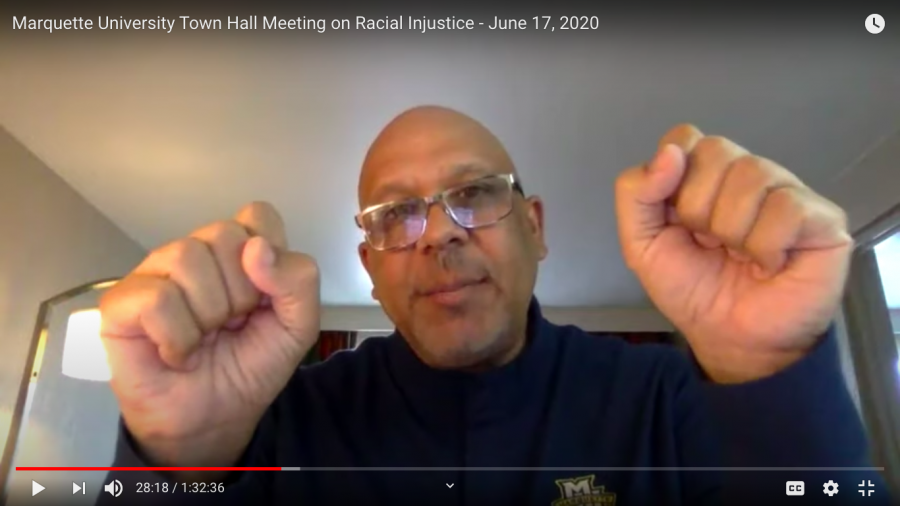 Provost Kimo Ah Yun demonstrates what his father taught him he should do if pulled over by a police officer in the virtual town hall on racial injustice.

Lovell’s opening remarks included revelations of his own racism. He said that his views changed in 2016, when he read Racial Justice and the Catholic Church, by Father Bryan Massingale. The book explores the role of the Catholic Church’s teachings in racism throughout history, since “confronting racism is difficult but essential work if we are to heal the brokenness in our society and our church,” according to its Amazon summary.

“Until that moment, I had been blind to my privilege for 48 years,” Lovell said. “In his book, Father Massingale made the compelling argument that the systems on which our country is based are inherently unfair and racist.”

The book helped him to realize that even people who aren’t actively racist help promote racism by not speaking up against racism when they see it, Lovell said.

“As someone who had privilege and benefited from unfair systems, I was tacitly racist because I accepted systems that were in place,” Lovell said. “I had never talked about or tried to change those systems. I never considered how unfair these systems were to others in society.”

Lovell then outlined some challenges he presents to the Marquette community. They included a call for students and faculty to educate themselves on racism and to reflect on how they can “Be the Difference.” He also said that members of the Marquette community must call out racism when they see it, those with privilege must use that privilege to break down systems that are inherently unjust and must stand together, especially in supporting the Black members of the university’s community.

Lovell also talked about some immediate actions the university is taking, including the formation of a scholarship for Black high school students in Milwaukee that would cover the full cost of tuition. He said that the university is working on fundraising to cover room and board costs as well, and the number of scholarships that will be offered per year is still being considered.

Additionally, Lovell said that the university will make curriculum changes which will impact “both the Core Curriculum and a student’s entire time at Marquette.”

He said that Ah Yun has already taken the first step towards this goal by reaching out to the Faculty Senate Executive Committee, which includes , to help in the curriculum changes.

“We will continue to offer unlearning racism workshops for faculty and staff and will look at broader training opportunities so we can all become more informed,” Lovell said.

These workshops began in February 2019 and were offered in early 2020, though there are currently no dates online.

He also said that Marquette has listened to student concerns over the lack of diversity in counseling center staff and has thus opened a position for a Black counselor, which Lovell said is now available for application.

Lovell then announced the creation of a President’s Commission on Racial Equity in honor of the 50th anniversary of the Educational Opportunities Program.

EOP “is an academic program that motivates and enables low-income and first-generation students whose parents do not have a baccalaureate degree to enter and succeed in higher education,” according to its website.

CORE will be made up of students, faculty, staff, alumni and community members. Lovell said it will have an “action-oriented focus on structural changes at Marquette and in Milwaukee.”

Lovell said that it will build on EOP and other existing programs at Marquette and in Milwaukee and will have quarterly reports, yearly tracking and external evaluations every three years.

Additionally, Lovell introduced the university’s Proposed 2020-2023 Plan for Diversity, Equity and Inclusion. Details about Marquette’s current efforts towards this end, as well as the new plan, can be found at the university’s diversity website.

According to the website, the new plan’s goals are to maintain a campus environment that promotes equity and to pursue strategic initiatives that not only strengthen this equity “but also promote an increased sense of belonging and internal engagement with university life.”

Following Lovell’s remarks, Ah Yun began to tell of his experiences growing up as a Black man. He said he is a first-generation college student and that neither his parents nor his two older sisters graduated from high school.

For his family, health insurance was whatever money they could save up in a paper bag until one of them got sick and needed to spend it.

Ah Yun said that, growing up in the 1970s, there were no checks on police actions.

“There were no cell phones, there weren’t video images,” he said. “People in my neighborhood were scared of the police, because if the police stopped you, it probably wasn’t going to end up well for you.”

Ah Yun said that when he was around seven years old, his father taught him what to do if he was ever pulled over by a police officer.

“You put both of your hands on the wheel, you hold them up high, and you don’t make any quick motions,” Ah Yun said. “He later taught me that, if it happens at night, the first thing you do is turn on the lights inside of the car, and then you put your hands on the wheel and you hold on, because you want to make sure that person can see from the outside inside, giving them no reason to worry about what you are doing.”

Ah Yun told how he was questioned many times for being a Black male in a position of power. For example, he was frequently pulled over or was told to park in the visitor’s lot at one of the first institutions he taught at

He said that one night while driving with his wife Catherine Puckering, who is white, he was pulled over and, after the cop looked past him to ask his wife if she was alright, Ah Yun said “You’ve got to be kidding me” and was told to get out of the car. After he was patted down, he had to stay in that position until another police officer arrived.

“If you’re not young and a person of color, then you probably don’t understand this goes on for most of our community,” Ah Yun said.

Ah Yun then asked Cumberbatch to speak. Cumberbatch is a member of SWIM’s steering committee.

Lovell and his wife, Amy, formed SWIM, “a community-wide effort to address impacts of generational trauma in Milwaukee,” according to its website. The organization has partnered with local groups such as the Social Development Commission “to inspire a dynamic collaboration that heals trauma and creates a resilient community.”

Cumberbatch urged students to not stop at participating in their classes and their volunteer hours. Cumberbatch said that, to really understand a community, you have to go there and be a part of it.

“I like what I hear, but I want to say to everyone who can hear my voice that it’s time to move to action,”  Cumberbatch said. “Dr. Lovell said that he didn’t think he was a racist until he realized that nonaction is an action but on the wrong side.”

He said that everyone must take action to be actively against racism because standing by as injustices happen contributes to the problem.

Cumberbatch said he spoke with members of the Milwaukee community who have organized recent protests.

“The only thing these folks want is 100% action,” he said. “All lives cannot matter until Black lives matter, because they’re part of the all.”

Cumberbatch said that what makes recent protests different is the amount of white participation.

“What we have to do is together, all of us, people of color, white, educated, uneducated, those with privilege and those without, from this point forward we must band together and put an end to these atrocities,” he said.

Next, Ah Yun invited Welburn to join the conversation.

“Blacks are constantly begging for oxygen, a gift that God has granted everyone,” Welburn said, quoting Father Patrick St. John, one of the only Black Jesuits in America. “Centuries of systemic racism have rendered a long list of resources unavailable to the Black community … Air should not be added to that list.”

Welburn said it is important for Black voices to be heard and for opportunities to allow full participation from the entire community.

“Students can make it through their college education and never cross paths with faculty of color,” she read. “Those that do, gravitate to us (faculty of color) for support every single time the university fails them, and it fails them far too often: when it erases their presence in history and philosophy books, when it contributes to the disconnection from the city it lives in, when it fails to fund efforts that truly serve students of color in the name of ‘safety’ (MUPD) and preserving the status quo.”

Rivera Berruz also talked about how people of color are most affected by COVID-19 and by Marquette’s prioritization of profit. She called on Marquette to show that Black lives matter by doing more than just a town hall.

Outlining eight action steps that the university should take, she concluded by stressing that she should not have to tell the university what to do, and that it has the resources to help improve the problem. Her suggested steps included increasing funding for officer across campus such as the Office of Diversity and Inclusion and improving retention practices for cluster hires such as herself.

“The answer to the questions we are here to ponder are already out there,” she said. “Listen to the screaming voices of people of color (past and present), of students, faculty, and staff of color and on this very campus, before they are choked — and do something! We are tired. I should not have to be the one to remind you of the fact that our exhaustion is predicated on a collective lack of action of those in power.”

She detailed the microaggressions she encounters every day, such as comments about her food, which pushed her away from interacting with other students outside of the classroom. She also said that being a minority places stress on her because of her classmates’ expectations that she always bring up race and gender.

“I have seen my role here and beyond as being that representation that history belongs to everyone and that my job is to make students feel heard and feel supported in a system and an education system that is often hostile,” Lamson said.

Lamson said she wants her students to “feel like they’re heard, the stories they bring into the classroom are important, and deserve to be taken seriously.”

After Lamson’s remarks, Ah Yun concluded the session. The event was attended by around 830 students, faculty and staff and a recording is available in full on the Marquette Today website.