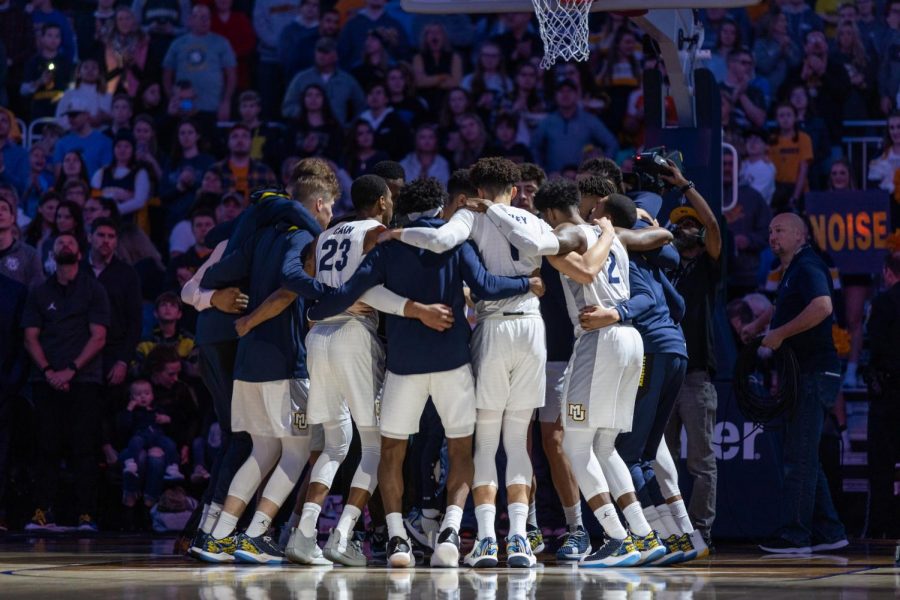 The Marquette men's basketball team gets ready before a game against Central Arkansas on December 28, 2019.

The Golden Eagles were strong in nonconference play last season, going 10-2, with eight of those wins by at least 10 points.

MU will open up its season at home against Lehigh University Nov. 10, just the fourth meeting between the two teams since 1949-50. Marquette went undefeated in the first three games with the Mountain Hawks.

Following the game with Lehigh, Marquette faces University at Albany at Fiserv Forum Nov. 14. The Great Danes have had little experience with BIG EAST teams, but played Providence back in 2018 and St. John’s this past season. Albany came up short in each game, both of which were on the road.

Marquette will then head out to Uncasville, Connecticut for the Hall of Fame Tip-Off at the Mohegan Sun Arena. The Golden Eagles will clash with Rhode Island Nov. 21 and either University of Central Florida or Minnesota Nov. 22. MU’s opponents will be competing in the Naismith Bracket, while Lehigh, Qunnipiac University, Albany, and Long Island University will compete in the Springfield Bracket.

Just three days after the tournament, the Golden Eagles will return home to play Chicago State Nov. 25. The Cougars are looking to get back on track after a 4-25 season that ended on a 19-game losing streak. Despite the lackluster record, Milwaukee native Andrew Lewis was a bright spot on the team, averaging 12 points, four rebounds, and just under two assists.

Western Michigan will then arrive at Fiserv Forum Nov. 28. The Broncos struggled on the road last season, winning just three of 15 away games. WMU is no stranger to struggles on the road, winning just 16 games in the past five years as the visitor.

Marquette then hits the toughest part of its nonconference schedule with three consecutive games against Oklahoma State, Wisconsin, and University of California, Los Angeles. The Cowboys, Badgers, and Bruins combined for a 58-36 record last season, and all three teams had win percentages over the .500 mark.

The Marquette-Wisconsin rivalry has been extremely balanced since 2010, with each team winning five of the 10 games between the Golden Eagles and Badgers.

Despite Marquette owning the home court advantage this year against Wisconsin, the Badgers have fared well in Milwaukee, with a 3-2 record over the past 10 years.

The Golden Eagles will then face UCLA for the first time since 1964 Dec. 12. The team will make the trip out to the West Coast this season, and then host the Bruins at the Fiserv Forum in 2021.

The information for the Gavitt Tip-Off Games has not been announced yet, but Marquette will play on either Nov. 17 or Nov. 18. An exhibition game might also be added to the schedule prior to the opener against Lehigh.

The NCAA is monitoring the coronavirus closely to determine how to resume college sports. The NCAA Sport Science Institute has been working with the NCAA COVID-19 Advisory Panel to formulate a plan of considerations that schools should take in order to reduce the spread of the virus. A list of core principles has also been created to help schools determine how to safely resume college athletics.