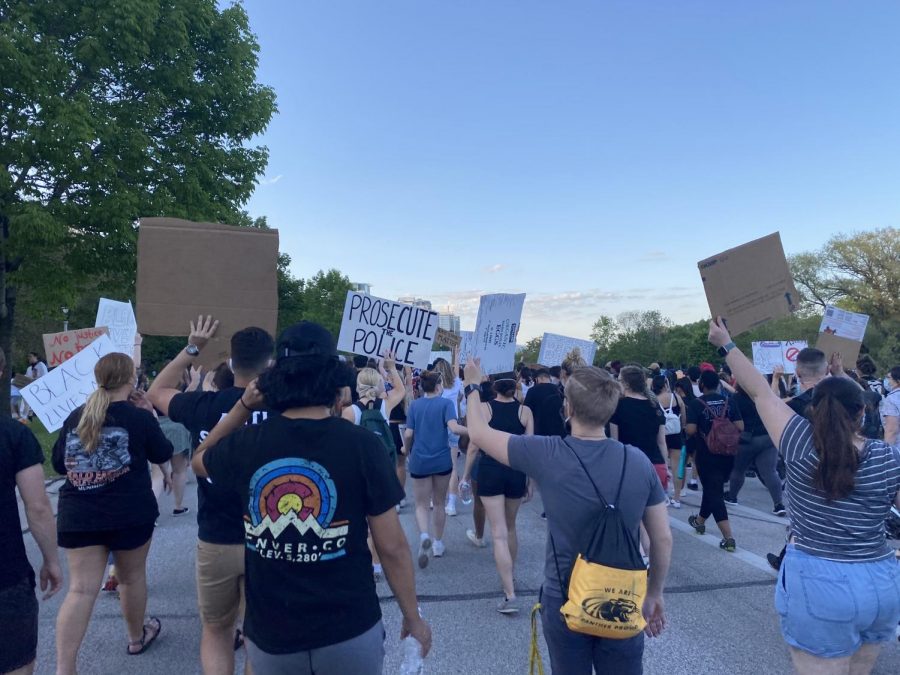 Carrying signs with slogans like “I Can’t Breathe” and “White Silence is Violence,” students and members of the Marquette community took part in a march on campus yesterday in support of the Black Lives Matter movement.

Cities across the United States – and the world – have become sites of Black Lives Matter marches following the May 25 death of George Floyd, after Minneapolis police officer Derek Chauvin knelt on his neck for nearly nine minutes. Milwaukee has had protests throughout the city every day since May 27.

Information about the June 3 Marquette protest was spread through text messages as well as listed in an Urban Milwaukee article titled, “Five Protest Marches Planned Wednesday”. The march was planned to begin at 6:30 at 22nd Street and Wisconsin Avenue and continued down to 14th and Wisconsin.

“We are deciding to take a stand and challenge Marquette in their decision to ‘take action, and be the difference,’” the circulating text message read. A prayer and encouraging words is not enough to support black students on campus.”

On May 30, a letter from university president Michael Lovell was sent to the Marquette community addressing the country’s racial issues. The letter called for the Marquette community to “pledge to live our Guiding Values and celebrate the diversity of our Marquette community and alumni network nationwide” as well as “commit to living our mission by standing in solidarity with our African American brothers and sisters.” It added additional links to a virtual June 2 Mass to “pray for an end to racism” as well as a written reflection from Dr. William Welburn, vice president for inclusive excellence.

Lovell’s email did not include any links to petitions, educational sites or donation portals to help those who have been affected.

Becca Stauffer, a junior in the College of Health Sciences, said Marquette has a responsibility as a Jesuit university to be more active during a time when racial injustices are brought to the forefront of the public eye.

“We have a foundation to care for others,” Stauffer said. “I just don’t think sending out an email saying ‘thoughts and prayers’ is enough at all.”

Ariel Vance, a 2020 alum from the College of Arts & Sciences, said she chose to take part in the Marquette protest because she does not feel like the university does enough to support black students on campus.

“I want to bring more awareness to the tension of people of color on campus,” Vance said. “I’ve personally been attacked by a lot of microaggressions that have stemmed from this campus, and I want to see something done about it. … There needs to be more.”

Vance was one of the first recipients of an airdropped photo with racial overtones in 2018 by a fellow student at the time. At the protest, she carried a sign with the photo along with the caption “Remember when we were the difference?”

Other non-student individuals also participated, one of which was staff member Dani Castillo, an office assistant in the College of Engineering.

Castillo was also pulling a wagon full of medical supplies. She said that she had been working with other protests in Milwaukee, serving as a medic.

Macie Robinson, a junior in the College of Health Sciences, said she feels Lovell’s letter issuing the university’s stance against injustice was a step in the right direction.

“I think (Marquette is) doing better since President Lovell sent out the email about their stance on injustice,” Robinson said. “It kind of puts the students at ease in a way and that they’re supported in this movement.”

Robinson was one of the students who spoke with the officers. She said they offered to block off traffic and help protestors move down the street, and said they would provide assistance if anyone tried to cause trouble during the peaceful protest.

“Our main thing was making sure that everyone in (the protest) was safe,” MUPD officer Josiah Williams, who helped overlook the protest, said.

MUPD blocked off roads allowing protesters to walk down Wisconsin. The group stopped in front of Cudahy Hall near 13th St. and created a circle while members of the protest took turns speaking. Afterward, they announced the group would be continuing east down Wisconsin beyond Marquette’s campus.

Williams said MUPD would make sure protestors safely travel through the Marquette patrol area, but would not be able to assist any further.

As protestors continued down Wisconsin Avenue, passing cars honked and raised fists in support. People on foot, bikes and cars joined in. The Marquette protest soon grew and merged with another Milwaukee protest that began in Humboldt Park near Howell and Oklahoma Avenue at 2:00 p.m. that continued to Veterans Park.

Upon reaching Veterans Park near the lakefront, Milwaukee protest organizers with megaphones informed the crowd that they had received tips that some individuals may be seeking to disrupt the peaceful protest, and that if protesters continued beyond that point, there may be increased danger.

Some organizers led the group back towards where they marched from for a safe place to disperse, while other protestors that had been warned continued forward to Milwaukee Police District Five where the majority of the remaining protesters dispersed around midnight.

This story was written by Kelli Arseneau and Ben Wells. They can be reached at kelli.arseneau@marquette.edu and benjamin.wells@marquette.edu.