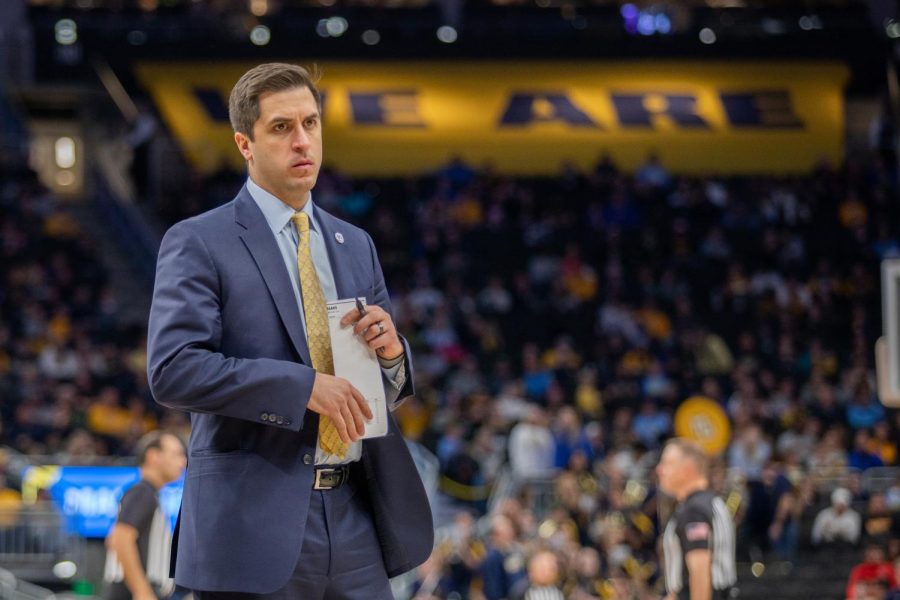 Assistant coach Jake Presutti returns to the bench after a timeout in Marquette's Dec. 28 win over Central Arkansas.

One morning in November, Jake Presutti’s son Theo had the “star day” many other three-year-olds would dream of having. A typical “star day” involves leading the class and bringing a few things from home.

“It was a special moment for him,” Presutti said. “He was so excited that he could barely walk. He was falling all over himself. … He was able to be there with his classmates and show off his big friends.”

It’s part of Presutti’s efforts as assistant coach to bring the same family-like atmosphere from his alma mater Syracuse University to the Marquette men’s basketball program.

“I try to implement my guys as much into my family’s life as I can because they’re my family too,” Presutti said. “Basketball is a major thing, but it’s not all about basketball.”

Theo Presutti’s “big friends” have embraced him and his shared name with Theo John.

“Theo John actually convinces recruits that my son is named after him,” Presutti said. “He’s actually named after Theodore Roosevelt.”

Presutti isn’t the only one trying to reinforce a family-like culture in the program. Recently, the team held video meetings to discuss the ESPN documentary “The Last Dance” and talk with alum and NBA veteran Wesley Matthews.

“We want to be a family-like atmosphere,” Wojciechowski said. “We want our players to know our families, and vice versa.”

The Syracuse alum is no stranger to Marquette. He joined Wojciechowski’s staff in 2014 as the video coordinator at age 28.

Wojciechowski, who was on the 2008 Team USA coaching staff, saw Presutti’s organizational, basketball and video strengths working in the front office at USA Basketball.

“It was kind of the trifecta,” Wojciechowski said. “Even though he was a young guy, it made it very easy for me to hire him.”

When Travis Diener left MU in 2017 to continue his professional basketball career in Italy, Presutti added director of basketball operations to his job title.

Then when Brett Nelson left MU last year to take the helm at College of the Holy Cross’s basketball program, Presutti moved up the ranks again, this time to assistant coach.

“It’s something I dreamed about for my whole life,” Presutti said.

He hasn’t spent too much time dwelling on his accomplishment, though. He got the job on a Tuesday in July. He hit the road to recruit the next day. He described it as a “whirlwind.”

Associate head coach Dwayne Killings said Presutti is “a student of the game,” which helped with the adjustment to assistant coach.

“He’s always watching, whether it’s college or NBA stuff, and figuring out how to implement that into what we do,” Killings said. “When he walks into the gym, the guys gravitate toward him because they want to learn from him.”

“He is always able to find the positive in situations,” Wojciechowski said. “For guys, that’s important because it’s a long year. It’s a long season. There’s a lot of noise that can distract you from the task at hand.”

Presutti, 34, is the youngest assistant coach on staff, which Wojciechowski said helps him connect better with players.

That’s especially the case with shoes and music. Along with the typical items for an assistant coach — a spare suit, a whiteboard with plays sketched out and notes everywhere — Presutti has a pair of Kevin Durant shoes in Marquette colors on clear display.

He said he’ll soon replace those with a pair of Marquette Jordan-brand shoes.

“Shoes are a passion of mine,” Presutti said.

It provides a stark contrast for players from Wojciechowski, who described himself as the “old fogey” of the coaching staff.

“I wear shoes, but I wouldn’t say I’m a shoe guy,” Wojciechowski said. “He’s able to educate me on shoes and other things.”

Presutti didn’t grow up in the Midwest, but he said he’s become a big cheese curd fan.

“This is home for me. This is the only home that my kids know,” Presutti said. “The Midwest things are pretty natural to me now.”

Presutti’s Syracuse roots still run deep, though. He keeps in touch, mostly via text, with Hopkins, who was the top assistant on Jim Boeheim’s staff while Presutti was with the Orange.

As the 34-year-old assistant coach develops his coaching philosophy, he takes different ideas from his mentors. His enthusiasm and emphasis on family come from Hopkins. His simple, big-picture approach comes from Boeheim.

“I’m not saying he didn’t get upset at halftime,” Presutti said. “But he always had great perspective on a season as a whole.”

Killings has noticed Presutti talking about zone defense a lot too, a trademark of Boeheim’s defenses.

“He’s got the zone down,” Killings said. “That’s definitely that Syracuse in him trying to come out.”

Now he sees those coaches on the recruiting trail.

“We get to talk differently now,” Presutti said. “We’re recruiting a lot of the same kids on the east coast. … It’s different, but it’s fun.”

When interacting with Marquette basketball alumni he played against, those roots show.

Marquette fans like to remind him of Darius Johnson-Odom’s game-winning shot against the Orange in the NCAA Tournament.

Presutti counters with Syracuse’s national championship in 2003 when Marquette lost in the Final Four or Marquette’s loss to Syracuse in the Elite Eight in 2013.

Presutti also vividly remembers beating Marquette in 2009 on senior night at the Bradley Center. He’s not afraid to remind Matthews about that game.

“He has some choice words about that game,” Presutti said.

Presutti is not holding his breath for a home-and-home series with his alma mater, but that’s certainly not from a lack of asking.

“I joked with Gerry (McNamara) and Coach (Boeheim) about playing, and they were not interested in playing Marquette,” Presutti said. “I even suggested without talking to anyone here that we would come there, and they still weren’t too happy about it.”