Daniel Pederson looks forward to next chapter in life after Marquette 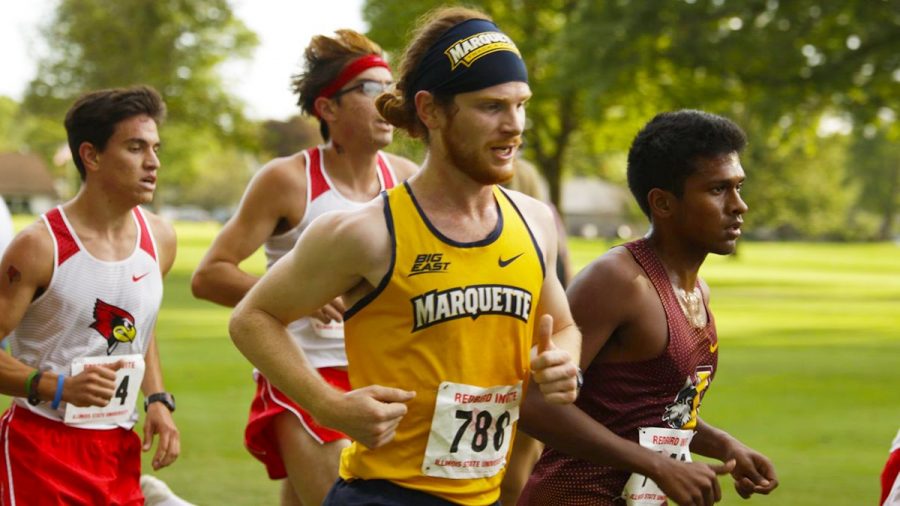 Senior distance runner Daniel Pederson made sure he left his mark in a Marquette uniform throughout his four years at the university.

A native of Spooner, Wisconsin, Pederson attended Spooner High School where he was a 3,200–meter state champion and 1,600-meter runner-up his senior year. He was also a 2015 WIAA Division 2 cross country state champion earlier that year.

Despite his impressive running resume at a small high school, Pederson didn’t gain as much traction from bigger universities that the typical state champion would receive, except from Marquette.

In fact, one of the only times Pederson had heard from the University of Wisconsin was directly after one of his races at the state meet, but it was too late, as he was already on his way to becoming a Golden Eagle.

At the time, former Marquette head cross country coach Mike Nelson was heavily recruiting Pederson for his impressive accolades in high school, which proved to work out in Marquette’s favor.

“I took an official visit to Marquette in high school and loved everything about it,” said Pederson. “I loved the team atmosphere and really liked the private and Jesuit aspect to the school, all while being close to home.”

It was a perfect fit for the distance runner who would look to make an impact on both the cross country and track and field teams the day he stepped on campus.

As a first-year, Pederson had important roles on both squads as he finished in the top-three Marquette runners in every cross country race he competed in that season. He also took first place later that year during the UW-Parkside Fall Finale indoor meet in the mile race with a time of 4:24.56, a personal record.

Although Pederson’s impact was felt right away by his teammates and coaches, not everything was perfect.

“Daniel had some early growing pains and dealt with a few injuries, which happens when you’re putting on that many miles every week, but he really developed by the time he was a junior,” head coach Bert Rogers said.

Pederson testifies to his coach’s words.

“The transition from cross country season to track and field season can be tough,” Pederson said. “You go from running outside and enjoying it to running laps indoors, which can cause some injuries. Track competition is a lot harder on your body and at some points, you have to just take a couple of weeks off and rest up until you’re ready again.”

Although being a two-sport athlete during college isn’t the easiest task, Pederson believes it helped him improve a lot with his running.

“I think I developed a lot of things over time, including improvements in strength training and speed work that eventually made me become a faster runner,” Pederson said. “I also increased my mileage from 50 miles a week in high school to about 100 miles a week at Marquette so that helped my endurance over time.”

Although his senior season was cut short due to the coronavirus pandemic, Pederson set a few personal records during his last indoor season including in the 800m with a time of 1:58.93 at the John Tierney Classic and ran a 4:12.66 in the mile race at the GVSU Big Meet.

“Daniel was a point scorer for our team in the distance races including the indoor 3k and 5k and outdoor 5k and 10k,” said Rogers. “Those are some of the toughest points to get as the BIG EAST is so deep in cross country and track and field, but Daniel did a great job of beating guys who had faster PR’s than him. He just knew how to compete.”

This was Pederson’s mentality in every race he competed in throughout his career at Marquette.

“I like to consider myself as a driver who pushes people by doing it myself,” said Pederson. “I like to put in the work and lead by example as I want my teammates to be the best runners they can be and have someone they can look up to.”

Despite the NCAA granting Division I spring sport athletes an extra year of eligibility due to the coronavirus pandemic canceling all spring sport seasons, Pederson plans to move onto the next chapter in his life.

Pederson ends his running career in a Marquette uniform holding the No. 5 all-time mark in school history in both the indoor and outdoor 5,000-meter races.

“Right now, I currently have a job in place for me in Wisconsin, so I knew I wasn’t going to be coming back to Marquette, but I’m starting to accept it more as each day passes,” said Pederson. “Running is different than most other sports because I can still run on my own after this is all over, so I’m not worried too much.”