Seeing familiar faces away from home 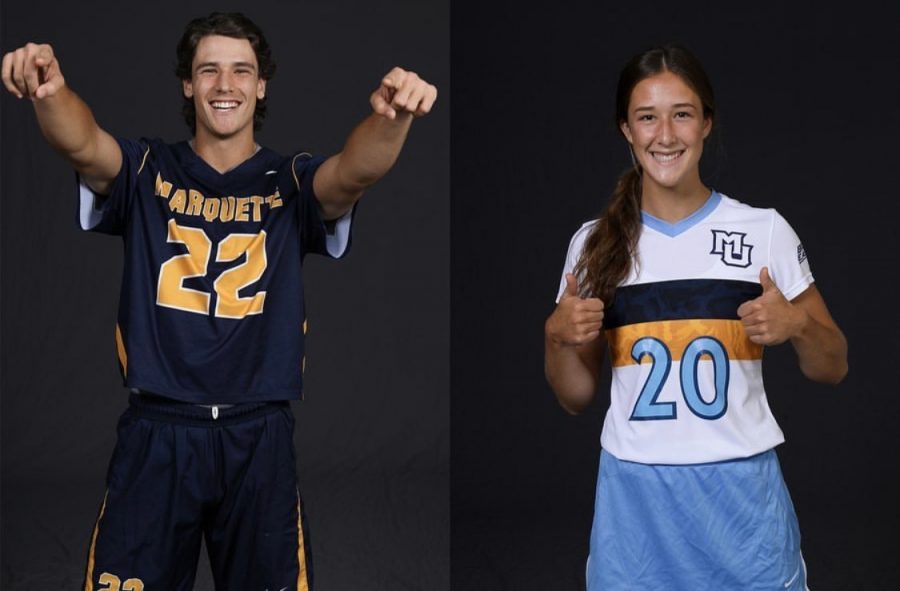 Cole (left) and Carrie (right) from a post on the Marquette SAAC Instagram page. (Photo courtesy of Carrie Froemming.)

For those who grow up in Eden Prairie, Minnesota, the most common sports to play while growing up are baseball, basketball, football and hockey. For Cole and Carrie Froemming, they found a love for a new up-and-coming sport in their state: lacrosse.

“Minnesota is not a hotbed (for lacrosse) compared to the East Coast or anything like that,” Carrie said. “We are the only two in our family who play lacrosse, and I honestly don’t think my parents knew what lacrosse was until we were kinda introduced to it.”

Cole, a senior defender on the men’s lacrosse team, said lacrosse has just made its way to Minnesota in the last decade or two.

“My parents grew up here in Minnesota, and lacrosse was not a thing until 10, 15 years ago, so they had no idea what it was,” Cole said.

He said he first acquainted with the sport in fifth grade.

“I was first introduced to it by one of my buddies on my football team,” Cole said. “I wanted to play a spring sport, and I was going to stick with baseball but I made the switch to lacrosse instead.”

Cole said that Carrie, a first-year midfielder on the women’s lacrosse team — also known as CJ — fell in love with the sport after seeing her older brother play.

“CJ kinda saw how much fun it was, how great of a time I was having, so she also gave it a shot,” Cole said. “From there, we got more and more into it, getting more competitive, started playing club, traveled around the country trying to get recruited.”

Cole said for the first three years of his collegiate career, he felt like MU was just his own thing.

“When I first got here, I was at Marquette by myself and my family wasn’t previously affiliated with Marquette itself,” Cole said. “It was always just my thing. I would go to school and come back (home).”

Things changed CJ’s senior year of high school — it took just one text message from Cole to convince her MU was the right choice.

“There was just a feeling of family,” CJ said. “I know when I was looking at schools, Cole reached out to me and said that Marquette is the place for you and I want you to be here with me. That was a really big part in my decision just knowing that I would have a family member with me in that first year and in that transition.”

Cole said CJ’s decision to come to MU made being on campus even more special.

“This year it was just completely different in a sense of that CJ is now here with me,” Cole said. “Just getting to see each other pretty much every day, it was always nice to feel at home.”

CJ said wearing Marquette across her chest just like her brother does is something she will always remember.

“Our relationship has grown so much, and it has been a really cool experience to represent the same school together, play the same sport and doing what we really love and sharing that beyond just being siblings,” CJ said.

Having two siblings play the same sport at the same university is not something new to the lacrosse programs at MU. Women’s lacrosse head coach Meredith Black played at Notre Dame at the same time as her older brother, Eric.

“Nothing is better in the whole world,” Black said. “My experience at Notre Dame was amazing, and I think playing with my brother was partly why it was so amazing.”

During her time in South Bend, Black was a two-time All-BIG EAST First Team selection, the 2004 BIG EAST Co-Attack Player of the Year and was the program’s first First Team IWLAC All-American in 2004.

Like CJ, Black said seeing her brother every day and having him there for help was special.

“We would practice at similar times, always running into each other heading on or off the field,” Black said. “Just having that consistent person there to lean on and understand what you are going through, that was amazing.”

Black, who led the Fighting Irish in assists, goals and points in 2004, said committing Notre Dame was an easy choice for numerous reasons, but her brother going there was the deciding factor.

“Growing up, I was always a Notre Dame fan, so that was easy to have on my radar, but when my brother decided to go there, it was, like, no other option,” Black said. “It was always like, if I get an offer or an opportunity to go to Notre Dame, I am going to take it because of him.”

When back home in Flemington, New Jersey, Black said it was always competitive training with her older brother.

“I would suit up in men’s gear and do faceoffs in the backyard, which was hilarious. I didn’t even have a chance,” Black said. “He would put goalie equipment on, even though he wasn’t one, just so I can shoot.”

Though the men’s and women’s sides of the sport are different, Black said her brother still was able to help improve her game.

“We would constantly battle and go on runs together,” Black said. “I can remember specifically him coaching me through it as I can’t necessarily keep up with him as well, but he would always be there to help me and make sure I was doing what I could.”

Black said though she could see the sibling connection between CJ and Cole, she wishes she spent more time around them.

“You could definitely see it,” Black said. “It was always brought up, but I didn’t get a ton of opportunities to see them interact, and I really wish I did because it would have brought back some really fond memories for me.”