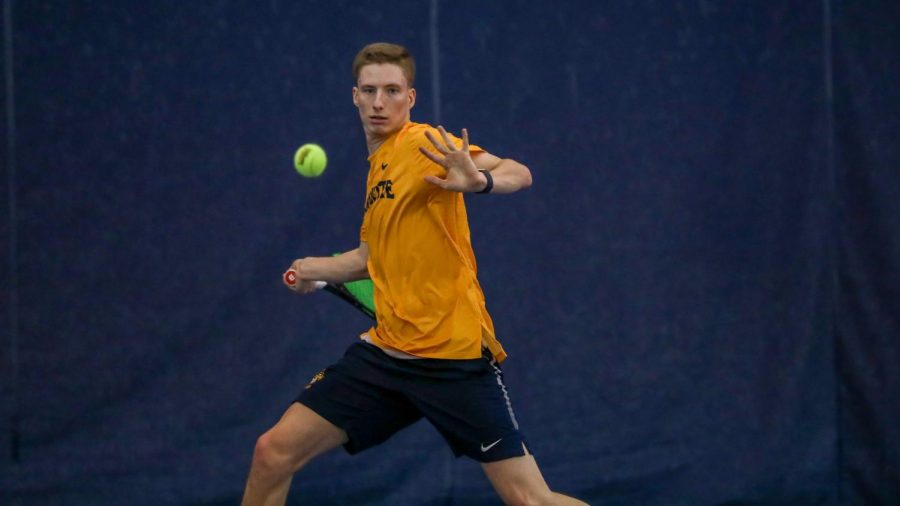 The coronavirus pandemic has not only canceled spring sports and the last chance for seniors to win a BIG EAST title but it has also sped up the process for of getting ready to enter the working field of their desired careers. Marquette men’s tennis senior Brett Myers said the transition is not going to be all that easy.

“It’s going to be pretty tough because every college athlete has been playing sports since they were probably (really young),” Meyers said. “It is a hard point to just stop everything … all of a sudden you have played your last match and now you are done (with sports). … Just like everything else in life, it is going to be a transition.”

Meyers said with growing up in an athletic household, sports have held a significant role in his life. He noted while he looks up to his two older sisters who were skilled tennis players, it is his sister Emily, a standout tennis player at Michigan State University, who he looks up to the most.

“I grew up idolizing her, wanting to play like her, and everything else about her tennis game,” Meyers said. “That’s how I got my start in tennis because I would go to all of her tournaments and learn a lot that way.”

Meyers mentioned that he stepped away from tennis to pursue another sport for a period of time as tennis was “becoming too competitive at a young age.”

“I quit playing from ages 10-14 — I just did not enjoy it,” Meyers said. “I played soccer for those four years, and I played travel soccer and traveled all around the country. In my freshman year (of high school), I decided to start playing again, and I made the last spot on the varsity team and every year I got better.”

As his skills improved, Meyers caught the attention of Marquette and head coach, Steve Rodecap, who felt confident in Meyers’ ability to be successful in the game of tennis.

Rodecap stated that though Meyers was not highly recognized nationally, what he liked most was Meyer’s drive to be better which ultimately made him convinced that Meyers was going to be successful within the tennis program.

“What I saw in them was just two kids that were just born to be winners,” Rodecap said when talking about Meyers and his teammate Alexander Warstler. “Whatever they are going to do, they are going to be really driven and successful.”

Meyer’s urgency to play right away for the Golden Eagles took a toll as a knee injury sat him throughout the fall and up until the month of January during his first-year. Once he worked his way into the lineup, Meyers’s competitive nature began to be seen on the court something he said he has seen grown throughout his four years.

“My game was pretty defensive. … Every year I have tried to be more aggressive,” Meyers said. “It was definitely seen during my senior year as I was a lot more aggressive. … As you move up the lineup (every year), you have to improve your game more and more in order to sustain your level of competitiveness.”

Rodecap said Meyers’ passion for the game played a role in his success.

“He won a ton of matches for us, and I would say over the course of his (collegiate) career, he probably won at a rate as high as anyone who had played (at Marquette),” Rodecap said. “What separates Brett from the rest is that he is a really good competitor but where he really stands out is how he pushed guys in practice.”

During his time, Meyers picked up some accolades to go along with his success on the court. He was named the program’s Most Valuable Player three times and the BIG EAST Player of the Week once during his junior season. Meyers said the team played a role in him receiving those awards.

“I had a lot of help around,” Meyers said. “It shows individually how well I did but also shows the support I had around me for all four years. … I never felt alone out there. I always felt supported.”

Though he was unable to finish his final season due to COVID-19, Rodecap said Meyer’s has left an impact on the court.

“He’s one of those guys that you know what you are going to get out of him if you are doing something competitively. … He does not like to lose and that goes into anything he does,” Rodecap said. “We have had more success over the last four years and a lot of that is due to that competitive fire that he brings every single day.”