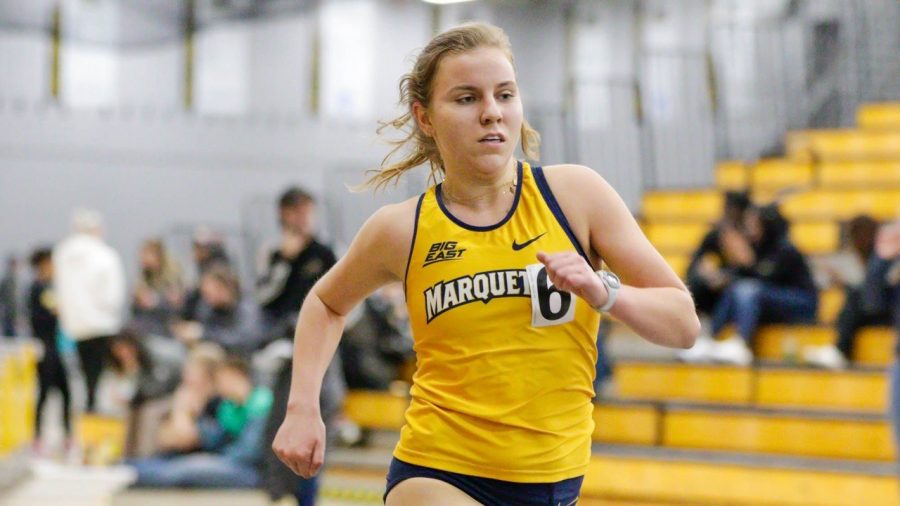 Sophie Bolich participates in the 2020 Panther Tune up at University of Wisconsin-Milwaukee Feb. 22. (Photo courtesy of Marquette Athletics.)

For Marquette women’s track and field senior distance runner Sophie Bolich, the premature ending to her senior season due to COVID-19 brought an appreciation of what she’s accomplished and the very difficult process it took to get there.

As a senior at her small high school in Plymouth, Wisconsin, Bolich heard from former cross country head coach Mike Nelson that he wanted her on the team.  She made her decision to attend Marquette to study journalism, and everything seemed to fall into place.

However, her first year did not go quite as planned.

“The transition to college for me was very, very hard,” Bolich said. “I couldn’t catch a break, I kept getting injured, I was putting so much pressure on myself and it was just hard to be away from home.”

Bolich’s hardships on the track came as a result of what she was dealing with off the track.

“I was really struggling with mental health and body image, and it got to a point where I would wake up in the morning and say ‘I can’t do this again,'” Bolich said. “I didn’t think I was going to make it.”

That was until she hit what she calls a turning point in her sophomore year when she became more open with her teammates, coaches, family and, most importantly, herself, about what she needed for her wellness.

“I made a conscious decision to work on my mental health above everything else,” Bolich said. “I slowly started to be honest with myself about what was healthy for me.”

Sean Birren, current head cross country coach and track and field assistant distance coach, said once Bolich made this positive change in her life, it reflected on the track, and she began to have fun again.

“It was fun to see her happy again with her athletics,” Birren said. “She was there every day and excited to be on the team.”

Birren said he and the other coaches tried to be part of the solution for Bolich by doing their best to make sure she was being taken care of.

“We knew she was a talented athlete coming in, and we told her that we needed to get her what she needed to have fun again,” Birren said. “We try to individualize all our athletes, and with her she stuck with us when she was struggling and really bought into what we wanted for her.”

Bolich said once she got past her first-year and sophomore seasons, which she called “a drag,” her junior and senior seasons were the most fun she has had, despite how it ended.

Bolich said that even though the early ending of the season was hard, she doesn’t feel like anything was taken from her, as she is ready to move on to the next phase of her life.

She said she will be returning to Marquette to get her master’s degree in Spanish and hopes to eventually get a job for a local news publication where she can use her skills in Spanish.

Birren said Bolich is an example of what one can accomplish when sticking with something through difficulties, as Bolich said one of the things contributing to her stress while competing was her schoolwork.

“She could’ve easily said she was done and that she didn’t want to deal with this anymore, but she stepped up and bought in,” Birren said. “There’s a beauty in student-athletes who hang in there when they’re struggling and yet continue to work and make adaptations.”

Looking back, Bolich said one of her favorite memories at MU came this year during the pre-season camping trip in August, just being around her teammates after Nelson suddenly left the cross country team for Monmouth College before this season. Birren was named interim head coach following Nelson’s departure.

“The change was definitely an adjustment, but during that trip, we were able to enjoy each other’s company and just got to hang out before the craziness of my last year of school started,” Bolich said.

Birren says that he appreciates how well Bolich took the change as a senior and how she went along with the plan.

“She was great in coming alongside the changes and buying in,” Birren said. “She dealt with a lot of adversity her first few years here, and for her to take that in stride and have fun in her last year here was fun to watch.”

Despite the cross country and track and field teams having many athletes on the rosters, Bolich said the camping trip is one way she has been able to build connections with teammates, which is something she is most thankful for in her time at MU.

“I was lucky to have the support from my teammates and family while I was struggling,” Bolich said. “I feel like through this sport, I’ve met a lot of people who I’ll be friends with forever.”