Prospective students ‘hope for the best’ in fall 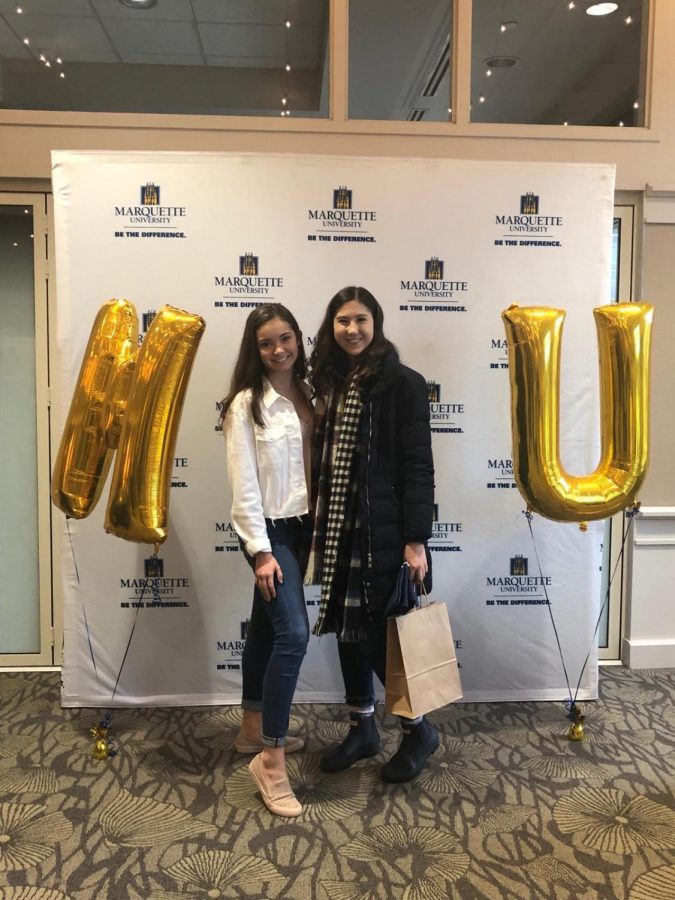 Vivien Ulrich (right) says Marquette is the first and only school she applied to. Photo courtesy of Vivien Ulrich.

Following the university’s decision to cancel or postpone all upcoming events for students due to the coronavirus outbreak, the Office of Admissions is reimagining the ways it connects with prospective students and students who have decided to accept admission.

“We build each class one student at a time,” Dean of Admissions Brian Troyer said. “That’s never been more true than it is this year.”

Student enrollment is down 11% from last year, University Provost Kimo Ah Yun said in a virtual address to the Academic Senate March 21. In the Class of 2024 so far, 1,142 students have sent in deposits. This leaves the undergraduate enrollment expectation for 2020 short by 162 students, Ah Yun said.

“I think our seniors fall into two camps,” Porcaro said. “Some of them have already decided where they are going, and they decided long, long ago. Then there are other students who are still trying to figure things out.”

Porcaro recently met with a student who, prior to spring break, had narrowed down his choice to two universities. There was just one problem: he had not visited either school in person. This renders his already-tough decision even more difficult, since he will now be unable to physically visit the campuses, Porcaro said.

“We were talking about some virtual options, but that doesn’t take place of the real thing,” Porcaro said.

For some, an in-person campus visit is one of the most important factors in a student college search and selection process. Although some students begin their college visits as early as their sophomore year in high school, that isn’t the reality for everyone, Troyer said.

“Many students were counting on the opportunity to visit in March and April before they made that decision,” Troyer said.

Bailey Striepling is one such student who made her decision, in part, by taking an in-person tour. Striepling, a transfer student from the University of Tampa, will begin attending Marquette in fall 2020.

“This probably sounds cliche, but when I walked onto the Marquette campus, it just felt like home,” Striepling said.

With campus closed and Wisconsin officials urging everyone who is able to stay home, Troyer and his team were tasked with marketing the Marquette experience virtually. In collaboration with groups across campus, the Office of Admissions added and improved options on the undergraduate admissions website for students to get a feel for the university.

The virtual tour in its current form is about two years old, Troyer said, adding that he has seen an increase of internet traffic to the admissions site.

The website is being updated “constantly,” Troyer said. As of April 26, the website has over 200 videos, ranging from produced content and short videos filmed by students and professors from home. There are videos from all seven undergraduate colleges.

Troyer said the Office of Admissions is paying attention to the needs of individual students through strategic and clear communication.

“A substantial portion of our students indicated on their application for admission that the primary language they speak at home is Spanish,” Troyer said.

A recent addition to the admissions website is titled “Bienvenidos a Marquette” to welcome Spanish-speaking students and their families. The section includes videos filmed by faculty, staff and students.

Prospective students have the option to schedule individual advising appointments with faculty or admissions counsellors through the website. Through those conversations, Troyer said he can better understand the needs of students.

“We learned that students and families really want to talk to a current student in a particular college, or they want to speak to a faculty member,” Troyer said. “With the outpouring of support from campus, we were able to provide that.”

Perhaps the most successful of the virtual events has been virtual panels hosted by admissions counselors and student tour guides, Troyer said.

“The best people to represent Marquette are its students … and we have a tremendous tour guide staff,” Troyer said. “We’ve asked them to do everything from write personal notes to admitted students to having phone calls with them.”

Allison Manning, a junior in the College of Communication, has been a tour guide since the spring semester of her first year. She said her happiest moments on the job are when she gets messages from students saying they’ve committed to Marquette.

One student who Manning toured around campus made the decision to come to Marquette, and afterward Manning said the two became friends. He was recently hired as a tour guide.

“That was such a full-circle moment,” Manning said.

She added that she still has the opportunity to build connections with students, albeit from a distance.

“When COVID-19 hit … I was really proud when our supervisors said, ‘You know what, we still want to include our tour guides,’” Manning said. “(They said), ‘You guys are our university.’”

Manning was recently included in a virtual admissions panel for prospective students from the East Coast. The panel, held on Zoom, included a brief information session followed by a Q&A where students could interact with tour guides.

“That was a really great way to have that in-person side, while also connecting with students at a safe distance,” Manning said.

Laura Schram, director of student success and recruitment in the College of Communication, said she has also found success in virtually connecting with students.

“It’s funny, because admissions has appointments set up for twenty minutes. Well, my first (virtual meeting) was an hour and a half,” Schram said.

The appointment was jam-packed with questions, but none out of the “ordinary,” Schram said. The twins on the phone were both interested in digital media, so Schram said she helped orchestrate another phone call for the brothers to speak with a professor.

“I’m always a cheerleader for Marquette,” Schram said. “I’m a visual person, so I like seeing people in person, but I’m taking this opportunity to get creative.”

Dean of the College of Communication Sarah Feldner created a virtual speaker series, called Diederich Drop-Ins, where alumni and current students can listen to and interact with professionals in the field of communication. Schram helped make the decision to invite admitted students and their parents to the events.

As part of the Drop-Ins, Alum Chris Marris spoke about life in the sports industry April 15. Around 30 admitted students and their parents joined the call, Schram said.

“They’re admitted, so they haven’t committed yet,” Schram said. “It was an awesome opportunity for admitted students to kind of see, to feel how it is.”

After the speaker finished, alumni and current students stayed on the call for admitted students to ask questions, Schram said.

“Some of them were shy, so they were just writing their questions in the (chat),” Schram said with a laugh. “It was certainly fun, so we’re going to do that again.”

The office is aware that the amount of information on the admissions website as well as sent via email may be overwhelming for prospective students, Schram said. The College of Communication was in the process of hiring a multimedia consultant, but that process has been put on hold following the university’s decision to temporarily pause all nonessential hiring activities in response to financial strain caused by the coronavirus.

“From the students I’ve met — and I didn’t ask them flat-out — they were saying they would go to social media versus the website to get information,” Schram said.

Striepling said she is satisfied with the communication from Marquette.

“In the beginning, I was getting a lot of emails just about how they were trying to figure out what to do for fall,” Striepling said. “Marquette is really trying to keep us in the loop.”

Even though she appreciates Marquette’s efforts, as transfer student, Striepling said the process is still uncertain.

“It was definitely very weird because I got accepted … and then coronavirus kind of just happened all of a sudden, and everything got shut down,” Striepling said. “And now we’re just hoping life will go back to normal in the fall.”

A survey conducted March 26-30 by firm SimpsonScarborough revealed one in 10 high school seniors who had planned to go to a four-year institution prior to the coronavirus is likely to change their decision now.

Vivien Ulrich, an incoming first-year in the College of Communication, said she tries to avoid the coronavirus news in relation to university operations as much as possible.

Marquette is the first and only school to which Ulrich applied. She said she was confident about her college decision as early as her sophomore year in high school.

“I go to all the basketball games, and I just love the atmosphere,” Ulrich said. “I’ve always loved Marquette.”

Ulrich said she believes Marquette has struck a balance with its communication, although she typically will only read the email headlines. An email she got announcing news about SPARK@HOME — a virtual orientation program for first-years to be held over the summer — was especially long, Ulrich said.

Striepling is primarily concerned about whether Marquette will remain online in the fall, she said.

In Ah Yun’s address to the Academic Senate, he cautioned faculty and staff from reaching out to admitted students about in-person classes. Marquette does not have an official answer on whether the fall semester will be online.

“I want the Marquette experience,” Striepling said. “But we kinda just have to hope for the best.”