Shut down: How Marquette’s campus closed 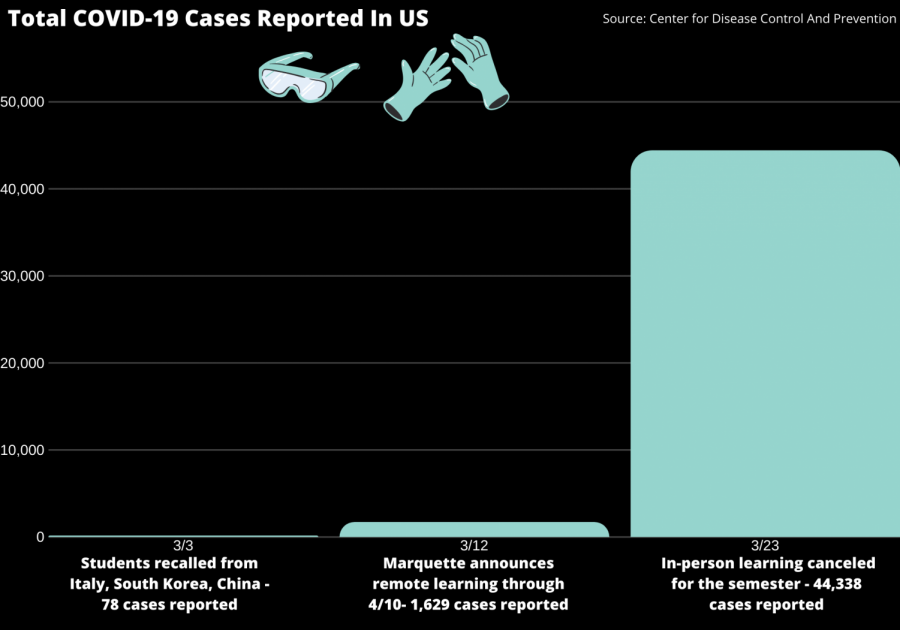 Campus was effectively closed for the rest of the academic year when Marquette announced the extension of online learning March 23. The university’s closure, a reflection of a national trend among higher education institutions, was unprecedented; here’s how Marquette administrators arrived at the decision.

Concerns about the novel coronavirus start overseas and gradually make their way closer to home. The earliest sign of impact arrives as the Beijing Center cancels its spring study abroad program Jan. 28, affecting one Marquette student. By March 3, the Office of International Education recalls all Marquette students in South Korea, China and Italy, and cancels summer programs in those locations.

On March 4, the Center for Disease Control and Prevention releases an advisory for Americans returning from international travel, stating they should self-quarantine for two weeks. As Marquette students leave for spring break, the situation begins to snowball.

On March 10, University of Wisconsin-Milwaukee announces it will extend its spring break by one week to “prepare to move the majority of its classes online” after an employee was tested for COVID-19.

Two days later, Marquette announces the move to online classes through April 10, the Monday following Easter, citing “clear and convincing medical evidence about the university’s ability to contain a spread of the virus on campus.” Students will know by Good Friday if they’ll be returning to campus for the academic year. Until then, the university has urged them to stay away from campus.

At this point, there are 1,629 confirmed cases in the United States, according to the Centers for Disease Control and Prevention. There were 414 new cases that day.

The city of Milwaukee announces its first positive case March 13. Less than a week later, the state bans gatherings of 10 or more people. All in-person higher education in Wisconsin is effectively shut down March 18, along with all public and private schools.

“Such institutions shall remain closed for the duration of the public health emergency or until a subsequent order lifts this specific restriction,” according to Emergency Order #5 from the Wisconsin Department of Health Services.

The university announces the extension of online learning through the end of the semester March 23. The number of confirmed cases in the United States jumps to 44,338 in the 11 days since Marquette announced the shift to online learning, according to the CDC. There were 10,934 new cases March 23.

The same day, the Milwaukee Commissioner of Health announces a stay-at-home order for the city. It is accompanied the following day by the statewide Safer at Home order from the desk of Wisconsin Gov. Tony Evers.

Provost Kimo Ah Yun is one of three members of the Executive Leadership Team, along with University President Michael Lovell and Senior Vice President and Chief Operating Officer Joel Pogodzinski. The team makes final decisions on the university’s response to the virus. Ah Yun said the team makes its decisions “with the health, safety and well-being of our campus community as our number one priority.”

In the March 12 announcement, the ELT cited “the highly contagious character of the virus and the danger it can pose to vulnerable populations” as the main factor in closing campus. The team claims that the university’s Jesuit roots call for them to be particularly vigilant in preventing spread of the virus.

The response team was behind major decisions like moving classes online and implementing new grading options. The primary response team is headed by Dr. Xavier Cole, vice president for academic affairs. Cole said he was not available for comment after repeated requests for interviews from the Marquette Wire.

University spokesperson Chris Stolarski said there are about 25 people on the primary response team.

“We have been gathering input and evaluating major changes to academic policies, including the Pass/Not pass decision, to aid our students during this unprecedented time,” Ah Yun said in an email.

Ah Yun said that the faculty of Information Technology Services and the Center for Teaching and Learning “undertook a herculean effort” to convert the university to remote learning in under a week.

“The spread of the coronavirus is an ongoing and ever-shifting situation that requires us to act quickly, yet thoughtfully, as we receive new information and state and local orders,” Ah Yun said in an email. “Right now, keeping everyone safe and healthy to help ‘flatten the curve’ is our top priority.”

The COVID-19 Response Team has a steering committee and five working teams that address the “medical, academic, employee, student life/residence life and external contacts” facets of the response, Ah Yun said. The five working teams are comprised of “approximately 100 subject matter experts,” including those from outside the primary response team, Stolarski said in an email.

Stolarski said several departments, including the Marquette Medical Clinic, Office of Residence Life and Academic Affairs, are represented on the roster.

Keli Wollmer, executive director of the Marquette Medical Clinic, chairs the medical subcommittee for the response team. She said the clinic advised the primary response team on “medical recommendations & considerations regarding the campus closure.”

“The Medical Clinic and the Medical Subcommittee continuously monitor the impact of COVID-19 on the local, state, national and world level, noting the number of cases, the community spread and modeling projections as well as mitigation strategies,” Wollmer said in an email.

Wollmer said the clinic is currently providing limited clinical services during remote learning. The clinic will instruct COVID-19 patients on quarantine guidelines and treatment options, as per local, state and federal authorities.

“Planning for a protocol for isolation/quarantine and contact tracing when students return to campus is ongoing,” Wollmer said in an email.

Wollmer said the university is currently formulating a Recovery Plan for the anticipated return of students to campus. She said the plan is being steered by guidelines at the state level, with Wisconsin’s Badger Bounce Back plan, and federal level, with the Trump administration’s Opening Up America Again plan.

For that reason, the Medical Subcommittee is vital to Marquette’s plan to reopen, as they are responsible for interpreting government-issued medical guidelines and how they apply to the university.

“Given the fluidity and rapidly changing nature of the situation, the clinic is looking at multiple potential scenarios for clinical operations,” Wollmer said in an email.

She said the clinic ensures compliance with the Safer at Home order and maintains regular contact with local health authorities for further advising on “best practices to ensure the safety of the (Marquette) community.”

This story was written by Matthew Martinez. He can be reached at matthew.martinez@marquette.edu or on Twitter @martz2517.