Foe looks back at special moments with MU 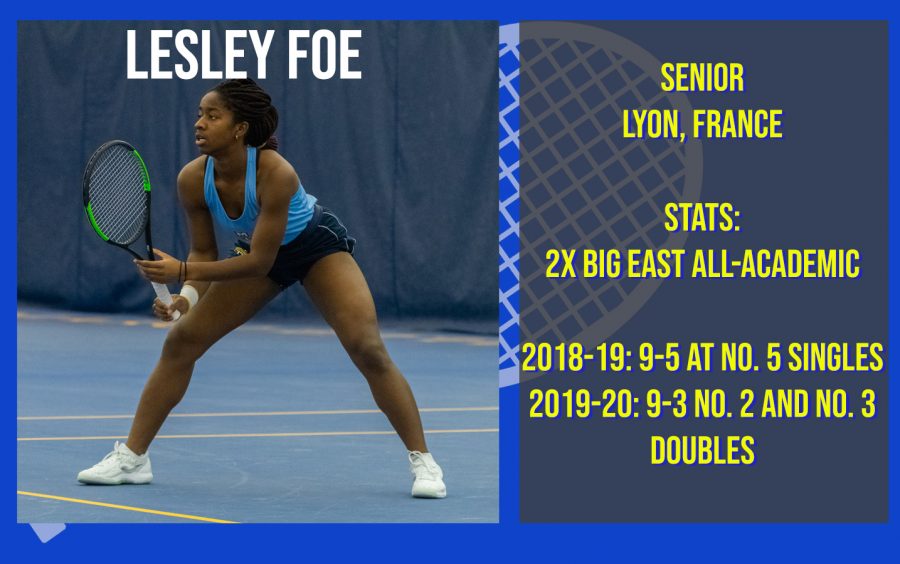 Marquette women’s tennis is more than just a team and head coach Jody Bronson said senior Lesley Foe is a big reason why.

“She has been somebody who wants to be one of those people who can bring the team together,” Bronson said. “(She) looked for the positive, making sure everyone is on the same page. … She’s a hard worker and she commits herself.”

The Lyon, France, native’s strong leadership and determination for positivity attest to her strong passion for the game of tennis, stemming back to her youth.

“I grew up playing different sports, but I always fell in love with tennis,” Foe said. “(However) my family did not necessarily have all the resources … (tennis) was an expensive sport situation.”

Though Lesley was not able to play the sport as often as she wanted, she ultimately told her mom about her goals moving forward. She would eventually leave home to attend ISP Academy and pursue her career in tennis.

“At 13, I sat down with my mother and told her that I love tennis and I have a passion for it and I really want to go all in,” Foe said. “At 13, I left home to go to boarding school and started dedicating myself to tennis.”

As Foe’s skills improved, assistant coach Dusan Medan traveled out to France to get a closer look.

“Dusan was very helpful … he actually traveled (to France) so we can have a face-to-face conversation,” Foe said. “That was one of the reasons why I chose Marquette. I saw that people were willing to go out of their way to make you feel like you belong somewhere.”

Aside from the tennis program, it was Marquette’s values that ultimately made Foe eager to become a Golden Eagle.

“I loved the dynamic and I loved their ideals in what they believe and what they stand for,” Foe said. “I just had this feeling that Marquette was going to help me grow in having a sense of community … (the university) was going to push me to where I wanted to be.”

Foe said adjusting to life in the States was not too difficult; however, her first time competing with the team came with a roller coaster of emotions.

“I was a freshman that came right around the middle of the season … I remember coming in and feeling a little nervous because we had a really small team and I felt a little bit of pressure in a sense that I had to perform right away,” Foe said. “I was so thankful for the seniors I had (at the time) and the coaching because, without them, my experience coming here would not be the same at all.”

Foe said one of her best moments with her team was when they came to support her after a tough loss in a singles match against the University of Iowa back in Febuary 2019.

“I was the first match to lose and I had never shed a tear in front of my whole team and I felt this huge wave of sadness as an athlete that I let my team down,” Foe said. “They all rushed to me and we all held each other and I’ve never felt so devastated yet happy … I have all these people around me and supporting me.”

The team’s later win against DePaul was a redeeming moment for Foe’s career in her eyes. She said it brought the team even closer as they celebrated the victory.

“When we beat DePaul, I remember feeling this intense happiness and everyone rushing to each other,” Foe said. “We worked so hard and we beat a team we have not beaten in a while and we are all in this together.”

Despite all of the success that the women’s team had this year, the season came to a rapid halt with the outbreak of the coronavirus.

“It hurts me tremendously to know that they did not get to see how (the season) was going to play out,” Bronson said. “It was very tough … there will be things that will happen that are beyond our control and that is not an easy thing to learn or accept but it is part of life.”

As for Foe, she is strongly considering making a return after the NCAA announced that student-athletes participating in spring sports will have the opportunity to play one more season.

“It’s an amazing opportunity,” Foe said. “It’s hard for seniors because you think about your life after college and you starting getting ready for the next chapter of your life. Personally, I would love to come back and do it over again, but it is a hard decision … With the community I am surrounded in, it encourages me to want to come back (to Marquette) and give it another shot.”