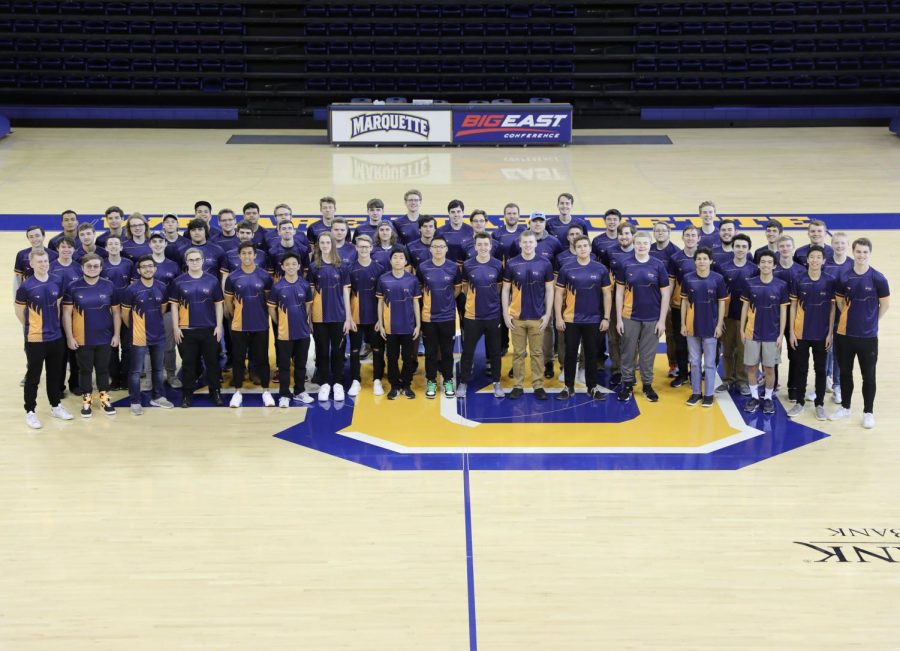 Despite the postponements and cancellations taking place in the sports world right now, one sport has not slowed down — in fact, esports has seen a rise in popularity during the quarantine. At Marquette, the Esports team cannot meet in person but are still competing in online tournaments from their homes.

Live sports games have been brought to a halt, but activity in the online gaming world has skyrocketed along with the esports community. So far, there have been several professional player tournaments where mainstream athletes take to online platforms to compete. The NBA community took to NBA 2K20, the online basketball video game, to match up while in the NASCAR community, some of the drivers are beginning to do online races.

Joshua Fendry-Gill, a member of the Marquette esports team and sophomore in the College of Arts & Sciences, said people are starting to see the appeal of esports.

“For the first time, a lot of pro athletes or people who have never watched sports are giving esports a chance,” Fendry-Gill said. “I think they are starting to see this is a very high-level thing. It’s not something anybody can just do; they’re realizing there’s a lot of talent and realizing how hard people work to be good at these games.”

Riley O’Brien, esports vice president and senior in the College of Arts & Sciences, said he can see the overlap between the mainstream professional athletes and the gaming world.

“You see a lot of NBA players going to 2K and I think NFL players would have a good time with Madden, so there’s a lot of crossover between those,” O’Brien said. “While in a lot of instances, it is not quite as good as the real thing, it’s still good to see the personalities behind the athletes shine in a different light.”

Marquette’s esports team is positioned uniquely during this time of social distancing and sports cancellations, with the sport being able to continue growing despite the lack of physical contact. While in-person meetings have been canceled, the club continues to compete remotely.

However, Patrick Glogovsky, esports president and senior in the College of Communication, said the club team has still experienced some challenges and disappointments due to the coronavirus.

The in-person meetings are canceled, but Glogovsky said he is glad to still be able to play.

“It’s really fortunate that we’re still able to associate with each other within the club because of our online medium,” Glogovsky said. “It is a bummer that it ended the way it did, but a lot of clubs can’t even experience that. … We’re done, but we’re also not really done.”

O’Brien had similar thoughts to Glogovsky, saying the club is still able to function at 75% of what it normally does.

The team still has groups competing in competitions and is planning on having a virtual end-of-the-year meeting.

“We’re still doing an end of the year virtual banquet,” O’Brien said. “It will be good to hear from everybody and address the club before we leave.”

Even though the program has yet to be officially named a varsity sport at Marquette, Glogovsky said he believes the program would have thrived in a time like this.

“This year, we had that big announcement that we were going to be the first (Division I) university to adopt an esports program at the varsity level, but we didn’t implement it. At that point, we would have been ahead of the curve, and our student-athletes would have been playing right now,” Glogovsky said. “Instead, they’re still at the club level, which is unfortunate because they’re not getting the publicity, and no potential students are seeing Marquette Gaming thriving right now.”

Esports will not start until the fall of 2020 at the earliest, but no new updates have been released. Glogovsky said he believes there would have been a big boost for both Marquette and its esports program if the program had been boosted to DI status.

“If esports was a varsity sport right now, it wouldn’t have stopped,” Glogovsky said. “It would have been a big, big imprint on the esports community to say we’re a driving force in the scene and we’ll continue to be so but obviously, that’s not the case right now.”